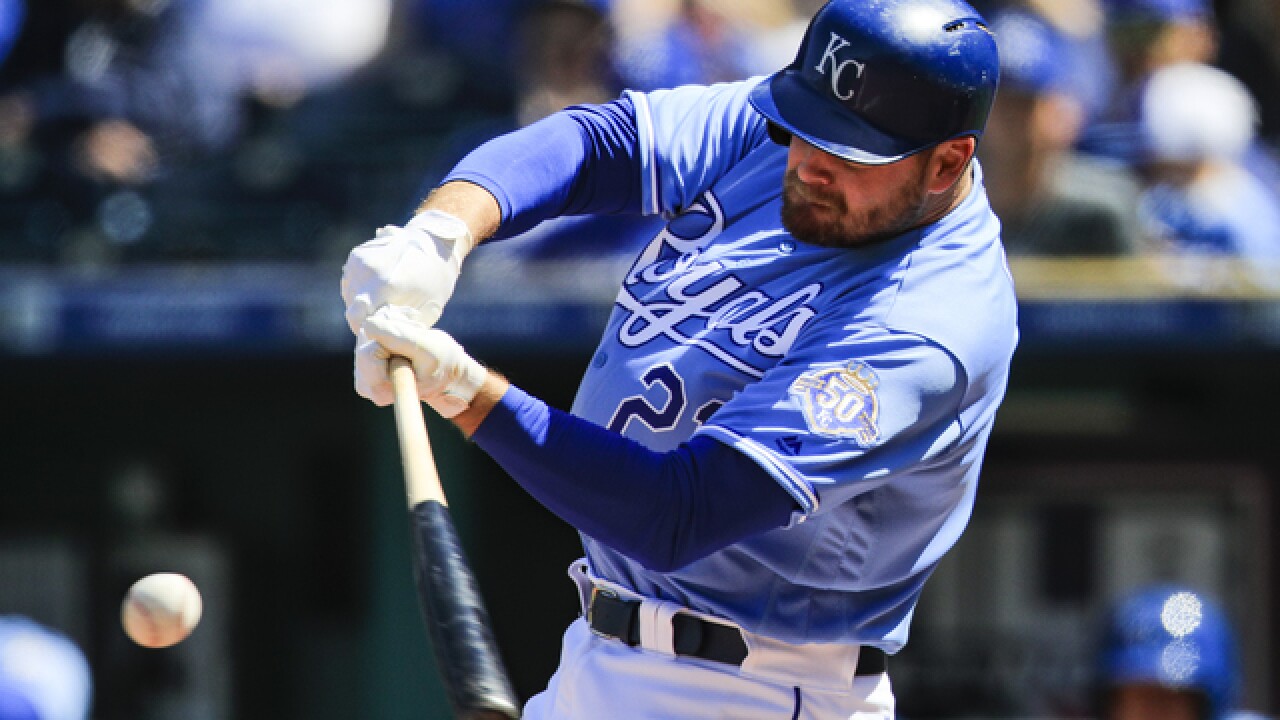 Copyright Getty Images
Brian Davidson
<p>KANSAS CITY, MO - APRIL 28: Lucas Duda #21 of the Kansas City Royals swings at the ball during the fourth inning against the Chicago White Sox in game one of a doubleheader at Kauffman Stadium on April 28, 2018 in Kansas City, Missouri. (Photo by Brian Davidson/Getty Images)</p>

For once, the Royals manager had plenty of reasons to praise his offense.

Duda finished with three hits and drove in four, and Soler and Gordon went deep along with catcher Salvador Perez as Kansas City outscored the Detroit Tigers 10-6 on Thursday to open their four-game series.

Everyone in the starting lineup had at least one hit except for Cheslor Cuthbert, and he came within a couple feet of a home run in the seventh inning. Kansas City finished with 13 hits in all.

"Every point in the game there were big homers," Yost said after a rare scoring outburst. "We knew it was only a matter of time before we got on track."

Chad Bell (0-1) allowed five runs in 1 2/3 innings in relief of Mike Fiers to take the loss, though nobody on the mound was very effective. Bell was optioned out after the game.

"I put my team behind early and I just kept giving up runs throughout the game," Fiers said. "There's got to be a time where I start making better pitches when we need it."

Eric Skoglund likewise struggled for Kansas City, but Kyle McCarthy (3-0) wiggled out of a key sixth-inning jam before pitching a clean seventh to earn the victory.

"Just wasn't able to stay ahead and they had some quality at-bats," Skoglund said. "I can't be any prouder of these guys. They absolutely competed and put up runs for me."

Nick Castellanos homered and had three hits for Detroit, while slugging designated hitter Miguel Cabrera left with a strained hamstring in the sixth inning. He briefly walked through the clubhouse after the game and said he was "fine," adding that he planned to test it on Friday.

"We'll have more details as we go along, see how it feels," Tigers manager Ron Gardenhire said. "Miggy was fine with his arm. He ripped the ball. He just started running to first after he hit the one and felt his hammy and strained it, just got him off the field."

The Tigers and Royals spent most of the afternoon trading stiff jabs.

Kansas City scored two in the first on singles by Duda and Jon Jay, then Detroit scored two in the third on Jeimer Candelario's double. The Royals answered with two in the bottom half on Perez's shot to left field, and both teams scored a run in the fourth inning.

Detroit finally knocked Skoglund from the game in the fifth, when Castellanos went deep and Jose Iglesias drove in a run off reliever Scott Barlow to tie it 5-5.

Fiers was gone after five runs and six hits and a walk in four innings, while Skoglund left after allowing five runs and eight hits and three walks in 4 2/3 innings.

Soler pushed the Royals back on top with his soaring homer to left later in the fifth, and they kept pulling away from there. Duda added a bases-loaded, two-out single in the sixth to continue giving Kansas City's bullpen plenty of support on "School Day at the K."

"You look up and see all the kids out here, you want to do whatever you can and win ballgames for them," Yost said. "It got to the point where we could tack on."

MIGGY LEAVES IN 6TH
Cabrera was trying to advance to second base in the sixth inning when he pulled up and grabbed his right hamstring. The two-time MVP had returned to the lineup Thursday after missing three games with biceps spasms. INF Niko Goodrum replaced him in the lineup. "A hamstring strain is nothing to sneeze about," Gardenhire said, "so we'll have to wait and see. We'll make a decision and let you know."

TRAINER'S ROOM
Tigers: DH Victor Martinez got the day off to rest a swollen ankle. ... LHP Daniel Norris (left groin injury) had a muscular decompression procedure Thursday. He's expected to miss up to 12 weeks.
Royals: 3B Mike Moustakas was in the lineup for the second straight day. He was hit in the forearm by a pitch earlier this week in Boston and missed some time with a nasty bruise.

UP NEXT
RHP Ian Kennedy hopes to get some rare run support from the Royals when he takes the mound Friday night against Detroit. LHP Francisco Liriano will be on the hill for the Tigers.