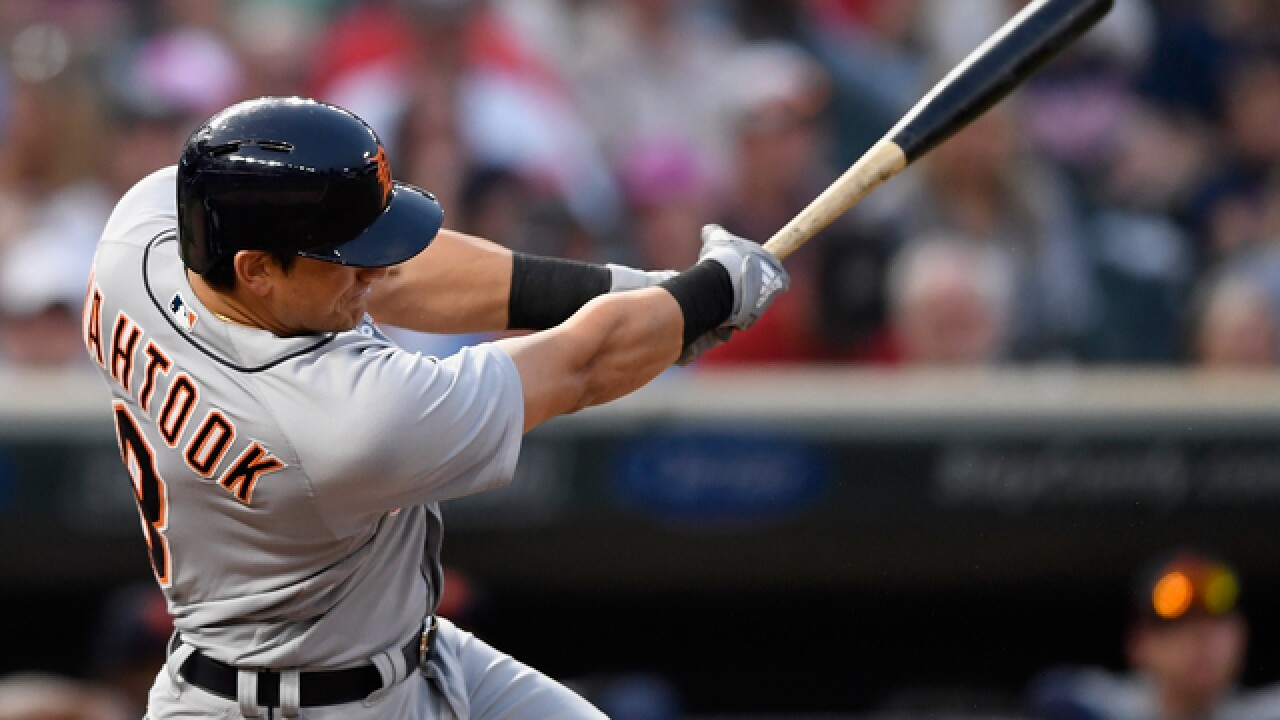 Copyright Getty Images
Hannah Foslien
<p>MINNEAPOLIS, MN - AUGUST 18: Mikie Mahtook #8 of the Detroit Tigers hits a three-run home run against the Minnesota Twins during the fifth inning of the game on August 18, 2018 at Target Field in Minneapolis, Minnesota. (Photo by Hannah Foslien/Getty Images)</p>

Mahtook's homer was his second of the year and came off reliever Tyler Duffey (1-2). Niko Goodrum was hit by a pitch leading off the fifth and Victor Martinez hit a grounder to first base. Mauer threw to second for the force and Goodrum initially was called out. But the call was overturned by a video review, and Mahtook followed with a no-doubt line drive deep into the left-field seats.

Carpenter (1-1) was making just his fifth major league start and first since May 31. The Twins had him on the ropes early, as the first three batters reached base, but Carpenter limited the damage and survived to pitch into the sixth.

Mauer led off the game with a home run, Eddie Rosario followed with a single, and Jorge Polanco's double put runners on second and third with nobody out. But Carpenter fanned Sano, got Logan Forsythe on a lineout to third, and retired Max Kepler on fly ball to get out of the inning.

Austin hit a solo shot in the second inning and Sano followed suit in the third, but that was all the Twins could manage off Carpenter, who walked none and struck out three in 5 1/3 innings. Four relievers combined to close it out, with Shane Greene picking up the last four outs for his 26th save in 29 chances.

Twins starter Kohl Stewart, the fourth pick in the 2013 draft, made his first appearance at Target Field after debuting Aug. 12 in Detroit. He was wild on Saturday, walking four in just 2 2/3 innings, and the Tigers chased him with a three-run third inning capped by Ronny Rodriguez's two-run double.

TWINS HONOR MORRIS
The Twins officially honored Jack Morris for his induction to the National Baseball Hall of Fame in a pregame ceremony on Saturday. A video replay of Morris' speech at last month's induction ceremony in Cooperstown, New York was shown on the scoreboard before Morris addressed the crowd.
The St. Paul, Minnesota native only pitched one season for the Twins, but it was a memorable one. In 1991 he won 18 games to lead the Twins to the postseason, then threw 10 scoreless innings in Game 7 of the World Series. Morris was joined at the podium by two other hometown Hall of Famers, Twins manager Paul Molitor and outfielder Dave Winfield, each of whom got his 3,000th career hit in a Twins uniform.

UP NEXT
Tigers: Detroit has not yet named a starter for Sunday's series finale.
Twins: RHP Jake Odorizzi (5-7, 4.44) will face the Tigers on Sunday. In his last start, Odorizzi picked up his first win in five weeks by pitching into the sixth inning and striking out nine in a 5-2 win over the Pirates.