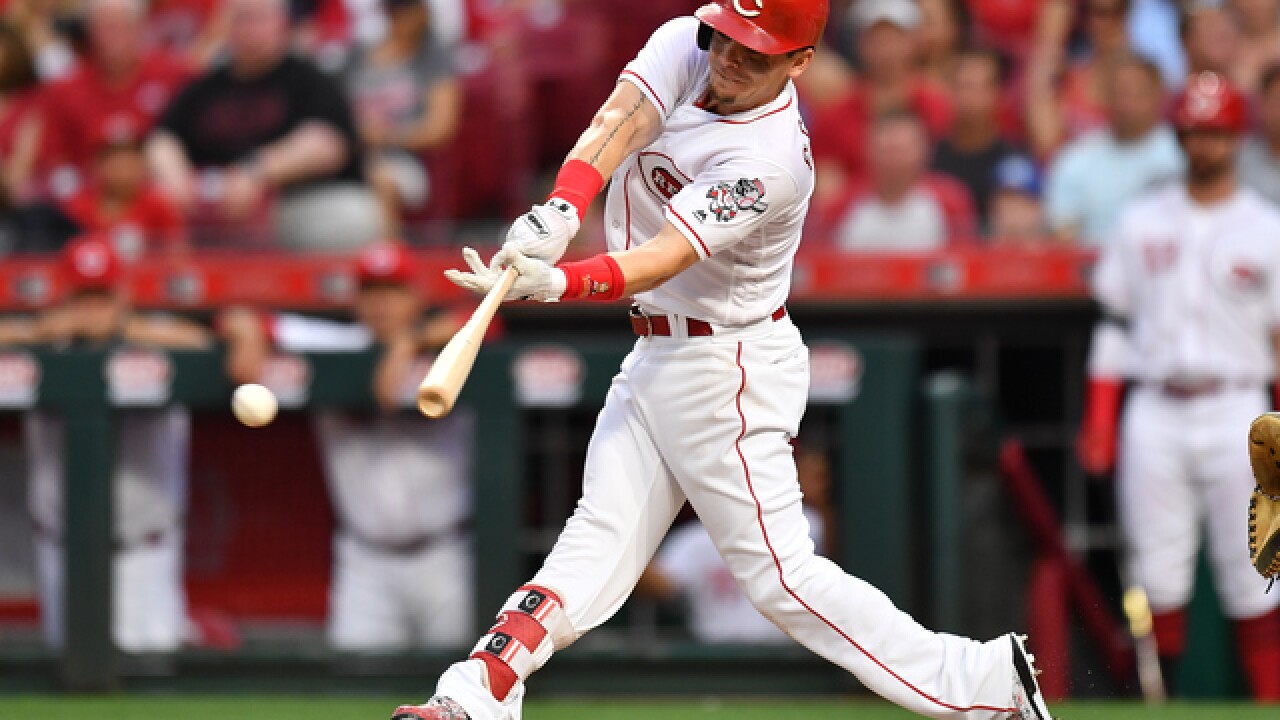 CINCINNATI (AP) -- The Tigers knew exactly what hit them -- the daunting combination of a homer-friendly park and a free-swinging Reds offense starting to come around.

Scooter Gennett hit a tying two-run homer , and Eugenio Suarez also connected on the next pitch -- a hit originally ruled a double but changed to a homer on review -- for a 5-3 victory and a two-game sweep on Wednesday.

The Reds moved ahead in the all-time series 13-11, with two games left at Comerica Park starting July 31.

After managing only a pair of singles through the first five innings, the Reds finally got to Michael Fulmer (3-6). Gennett connected with two outs for his 13th homer, tying it 2-2.

"The way we're playing right now is how we expected to play all year," Gennett said. "It's a lot of fun."

Fulmer threw Gennett a slider that was headed for the dirt on a 1-2 count, only to see it sail out to right field aided by the wind.

"I thought it was a great pitch," Fulmer said. "I'm mad at the results, but I'm not mad at the way I pitched."

Suarez hit Fulmer's next pitch to left field, with the ball landing on the top of the wall and bouncing back into play. The Reds sounded their home run siren and shot off fireworks, but the umpires ruled the ball was in play and stopped Suarez at second base.

After a review of 1 minute, 12 seconds, the hit was ruled a homer -- replays indicated the ball skipped off the top of the wall and deflected off a railing behind it.

Adam Duvall added a solo shot in the eighth as the Reds out-homered the Tigers 3-2.

"That's the way it is here," manager Ron Gardenhire said.

Tyler Mahle (6-6) overcame a pair of solo homers to remain unbeaten in four June starts. The rookie has allowed a total of four earned runs while going 3-0 in the month. He struck out eight in six innings of his team-high sixth quality start.

Raisel Iglesias gave up a hit in the ninth while earning his 11th save in 13 chances.

INTERLEAGUE
The Reds improved to 6-1 in interleague games. They've won five straight against the AL, tying their best all-time mark. The Tigers fell to 1-7.

SWING AND A MISS
Fulmer has little hitting experience in the majors, and it hurt the Tigers in the sixth. With runners on second and third and two outs, the Reds intentionally walked Dixon Machado to bring up Fulmer. He struck out on three pitches, the last one a high 94 mph fastball. Fulmer is 0 for 9 with six strikeouts for his career.
Gardenhire said that's the big advantage for the NL, where pitchers take batting practice regularly.
"There's your unfair advantage," he said.

HARDY APPEARANCE
Left-hander Blaine Hardy relieved in the seventh and gave up a pair of hits and a walk. Hardy has been a fill-in starter for the Tigers' depleted rotation and pitched into the sixth inning Sunday for a 3-1 win over the White Sox.

VOTTO HONORED
Joey Votto received his 2017 Lou Marsh Award as Canada's Athlete of the Year, the second time he's won it. Ferguson Jenkins and Larry Walker are the other baseball players to win it.

TRAINER'S ROOM
Tigers: Right-handed reliever Drew VerHagen was placed on the 10-day disabled list with a broken nose suffered Tuesday night when he was hit by a thrown ball while covering first base. Right-handed reliever Johnny Barbato was called up from Triple-A Toledo. He gave up Duvall's homer in the eighth.
Reds: Manager Jim Riggleman and the training staff are developing a rehab plan for starter Homer Bailey, who has been sidelined since June 2 with a sore right knee. He's 1-7 with a 6.68 ERA.

UP NEXT
Tigers: After a day off, the Tigers start a weekend series in Cleveland, where they've lost 20 of their past 26 games, including their past seven. Mike Fiers (5-3) is 1-0 with a 3.86 ERA in two starts at Progressive Field.
Reds: Matt Harvey (1-5) makes his eighth start for the Reds, who open a four-game series against the Cubs at Great American Ball Park. Harvey has lost his past three decisions for the Reds, who got him from the Mets in a trade for catcher Devin Mesoraco on May 8.