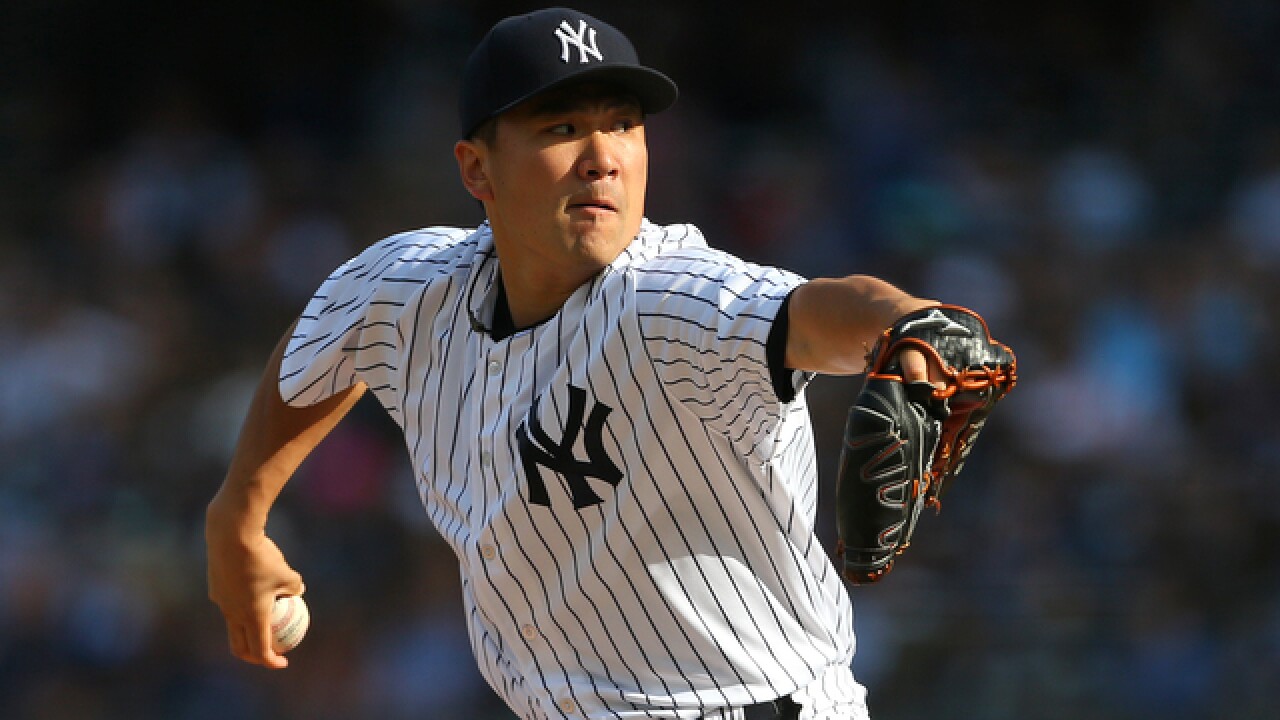 Copyright Getty Images
Rich Schultz
<p>NEW YORK, NY - SEPTEMBER 01: Pitcher Masahiro Tanaka #19 of the New York Yankees delivers a pitch against the Detroit Tigers during the second inning of a game at Yankee Stadium on September 1, 2018 in the Bronx borough of New York City. (Photo by Rich Schultz/Getty Images)</p>

The Yankees got only two hits, but won for the 11th time in 15 games. New York has the second-best record in the majors, behind AL East-leading Boston.

Andrew McCutchen went 0 for 3 and struck out twice in his Yankees debut. The former NL MVP batted leadoff and played right field, a day after being acquired from San Francisco.

Tanaka joined Andy Pettitte as the only pitchers in Yankees' history to reach double-digit wins in each of their first five seasons in the majors.

Jonathan Holder pitched a scoreless eighth and Dellin Betances notched his second save in the ninth.

Torres hit his 22nd homer of the season and third since the start of New York's homestand on Monday, a stretch over which he's batting .526 with eight RBIs.

Torres connected in the fifth off Daniel Norris (0-3) for the Yankees' first.

Norris, reinstated from the disabled list and making his first big league appearance since April 29, was pulled later in the inning with cramping in his left calf. He had been sidelined for most of the season with a strained left groin.

The Tigers loaded the bases in the first and scored on a sacrifice fly by Victor Martinez.

CALL-UPS
Both clubs made additional roster moves before the game with rosters expanding from 25 to 40.
New York recalled RHP Luis Cessa and INF Tyler Wade from Triple-A Scranton/Wilkes-Barre and signed lefty reliever Stephen Tarpley to a major league contract. Wade appeared as a pinch-runner in the seventh, stole a base and remained in the game. OF Shane Robinson was designated for assignment.
Detroit recalled RHP Sandy Baez from Double-A Erie.

TRAINER'S ROOM
Yankees: SS Didi Gregorius (left heel contusion) sprinted on a treadmill, fielded groundballs and took batting practice. GM Brian Cashman said that a more realistic return date for Gregorius could be Friday in Seattle as opposed to Monday at Oakland. ... OF Clint Frazier (migraines) will be re-evaluated after finishing the remaining minor league games available to rehab in. ... LHP Aroldis Chapman (left knee tendinitis) continues to receive treatment but there is still no timetable for his return.

UP NEXT
Tigers: LHP Matthew Boyd (8-12, 4.22 ERA) will make his first career appearance at Yankee Stadium in Sunday's series finale.
Yankees: RHP Lance Lynn (8-9, 4.84 ERA) tries to get back on track after allowing 13 runs in 15 innings over his last three starts.