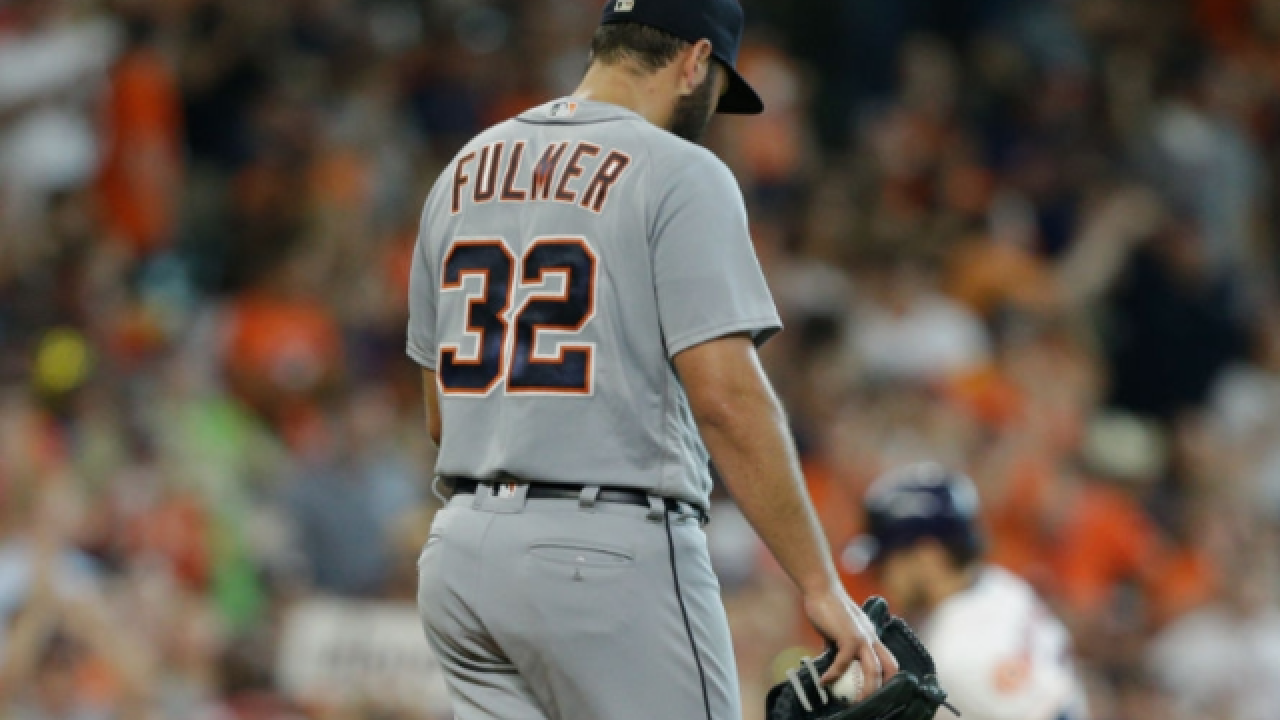 HOUSTON (AP) -- Gerrit Cole wasn't as dominant as he has been throughout the first part of the season. He didn't need to be.

Cole struck out eight in 5 2/3 strong innings, and the Houston Astros hit three home runs in a 9-1 win over the Detroit Tigers on Saturday.

Cole (10-2) allowed one run and three hits with four walks after being activated from the bereavement list prior to the game.

"It was tough to keep the emotions in check at times trying to control things that are out of my control," Cole said. "I'm thankful that we put up a bunch of runs, gave us some cushion, and all in all, played a good game."

He threw six shutout innings in his last start Monday against Oakland.

"He was pretty emotional today just getting back into things and getting through the game," Houston manager A.J. Hinch said. "Being away from this club for a couple days and then jumping right back into the competition is probably a little hard. I think you could expect looseness around the strike zone when he wasn't making his pitches. He expects to be perfect; still pretty good."

"I don't think we let him get ahead too often," Reddick said. "We seemed to jump on his fastball when he threw strikes and it really paid off for us."

Houston got to Fulmer early with five runs in the first three innings.

The Astros took a 2-0 lead in the first on Yuli Gurriel's sacrifice fly and Reddick's run-scoring bloop double to shallow center. George Springer had an RBI double and Alex Bregman a run-scoring single in the second to push the lead to 4-0. Marwin Gonzalez's RBI single in the third made it 5-0.

"They didn't kill our guy at all," Detroit manager Ron Gardenhire said. "They blooped some in and got some hits. That's a good team over there. They put balls in play. They jump first pitch if you make a mistake. They got a lead and they did what they're supposed to do with it."

James McCann had an RBI double in the sixth, snapping a 19-inning scoreless streak for the Tigers. Detroit hadn't scored since the fourth inning of Wednesday's game against the Rays. The Tigers have lost six straight.

Fulmer said he felt like he had some of his better stuff this season. Fulmer was frustrated with Pat Hoberg's strike zone throughout the game and voiced his displeasure with it after the game.

"The guy was God awful," Fulmer said of Hoberg. "It was a bad day for him and for me. ... You can't give a team like the Astros extra strikes. It's just what it boils down to. I made my fair share of mistakes, but there's 10 calls about pitches inside the zone that he called balls. I let him know he missed 10."

Fulmer lost his fourth straight decision and has allowed at least three runs in each of his last five outings.

GETTING THEIR RINGS
Detroit RHP Mike Fiers and LHP Francisco Liriano received their World Series championship rings before Saturday's game. Fiers pitched for the Astros from 2015-2017, while Liriano was acquired by the Astros at the trade deadline last season and appeared in five postseason games.

ASTROS ROSTER MOVE
With Cole coming off the bereavement list, the Astros optioned OF Jake Marisnick to Triple A Fresno.

HE SAID IT
"My thing is, umpires, I don't know if they don't take pride in it or what, but they don't get held accountable for the bad calls, the missed calls. For him to admit he missed 10 pitches for me alone, I'm sure it was bad for the other side as well." -- Fulmer on the umpiring.

TRAINER'S ROOM
Astros: SS Carlos Correa (back stiffness) does not have a definitive timetable for when he will begin a rehab assignment, Hinch said. Correa has been on the disabled list since June 29.

UP NEXT
Tigers: Liriano (3-5, 4.74 ERA) will make his 15th start Sunday in the series finale looking to rebound after allowing seven runs on eight hits in 2 1/3 innings against the Rays on Monday.
Astros: RHP Justin Verlander (9-4, 2.05) will make his 21st start of the season and the first of his career against his former team. Verlander threw six scoreless innings but did not factor into the decision Monday against the Athletics.