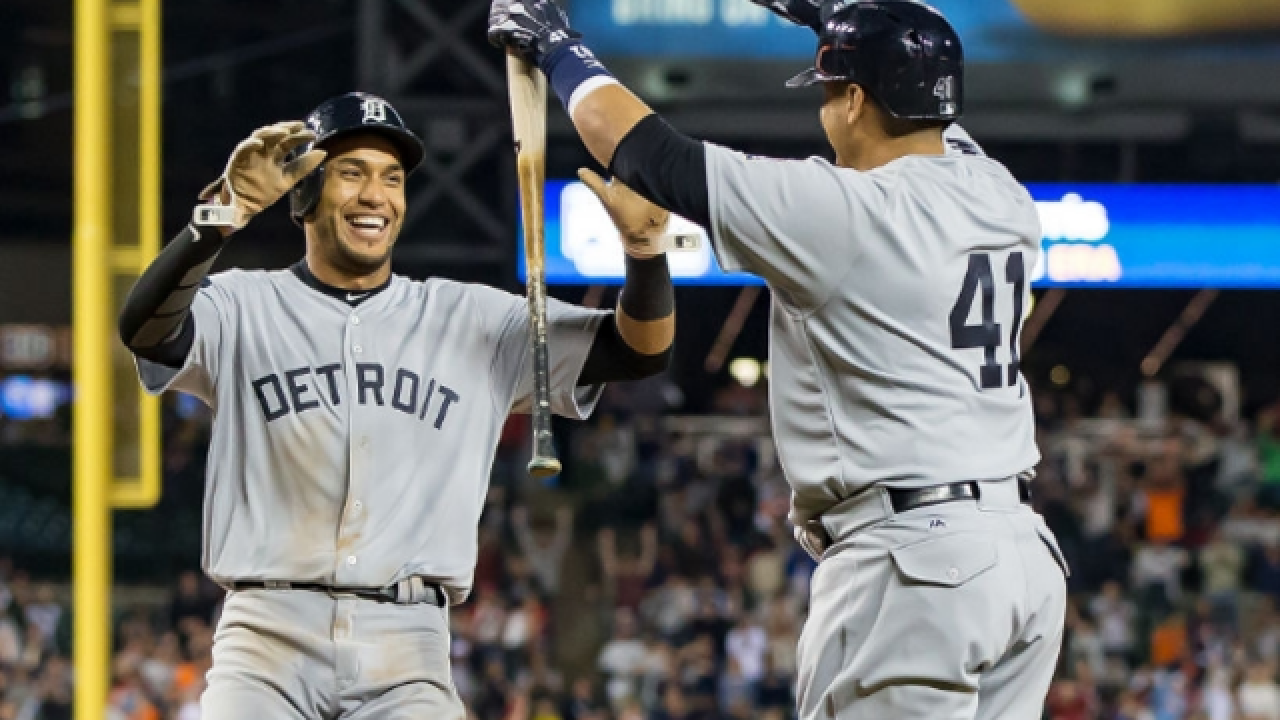 Copyright Getty Images
Dave Reginek
<p>DETROIT, MI - SEPTEMBER 08: Victor Reyes #22 of the Detroit Tigers scores the game winning run on a wild pitch in the bottom of the ninth inning and hi-fives teammate Victor Martinez #41 during a MLB game at Comerica Park on September 8, 2018 in Detroit, Michigan. The Tigers defeated the 4-3. (Photo by Dave Reginek/Getty Images)</p>

DETROIT (AP) -- Victor Reyes scored on a game-ending wild pitch with one out in the ninth inning, and the Detroit Tigers beat the St. Louis Cardinals 4-3 Saturday night.

The Cardinals, who entered with a one-game lead for the second National League wild card, have lost five of seven. The Tigers have won four straight.

The Tigers led 3-1 with two outs in the top of the ninth, but Marcell Ozuna hit a two-run homer off Shane Greene (4-6) to tie the game. It was Ozuna's 18th homer and third in two days.

The Cardinals intentionally walked Nicholas Castellanos to load the bases with one out, but Norris bounced the next pitch and Reyes scored easily.

Ozuna's homer took a win away from Tigers starter Matthew Boyd, who struck out 11 while allowing one run and two hits in seven-plus innings.

Boyd gave up only one hit over the first seven innings -- a second-inning double by Yairo Munoz -- but Paul DeJong led off the eighth with his 17th homer, cutting Detroit's lead to 3-1.

Boyd then walked Munoz, his first walk of the game, and Tigers manager Ron Gardenhire brought in Alex Wilson. He and Daniel Stumpf finished the eighth, but Greene allowed an infield single to Carpenter before Ozuna's two-out homer.

After Boyd struck out the side in the first, the Tigers scored twice in the bottom of the inning. Two walks and a single loaded the bases with none out, and Candelario scored on a wild pitch. Victor Martinez made it 2-0 with a sacrifice fly, but Flaherty struck out the next two batters.

Boyd fanned nine in the first four innings, and the Tigers gave him another run in the fourth. With two outs and a full count, Reyes broke from first and was able to score on Candelario's bloop single to center.

Harrison Bader nearly got the Cardinals on the board in the fifth, but Mikie Mahtook made a running leap into the left-field fence to rob him of a home run. Bader is usually on the other end of such plays -- according to MLB Statcast, he leads the majors with seven 5-star catches.

BIG NIGHT FOR BOYD
Boyd's 11 strikeouts were the most by a Tiger in any game against the Cardinals, including their three World Series matchups. Mickey Lolich, who was in attendance as part of the 50th anniversary celebrations of the 1968 World Series, had nine in Game 2 that year, and David Price matched that mark in a 2015 interleague game.

GOLDEN ANNIVERSARY CELEBRATION
The teams wore throwback jerseys as part of Detroit's celebration of its 1968 World Series victory over St. Louis, but they had to fudge things a bit. The Tigers haven't changed the design of their home jersey in the last 50 years, so they wore replicas of their 1968 road jerseys -- a plain black "Detroit" on a gray uniform.