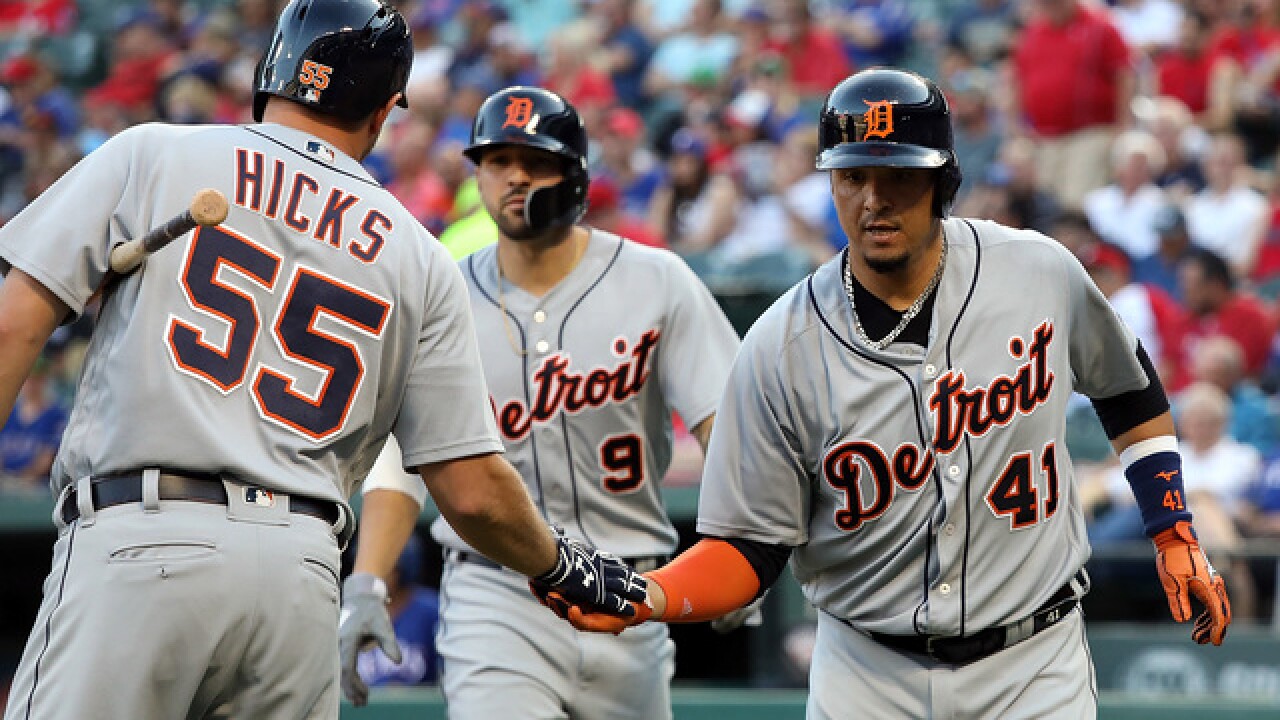 Copyright Getty Images
Ronald Martinez
<p>ARLINGTON, TX - MAY 08: Victor Martinez #41 of the Detroit Tigers celebrates a two-run homerun with John Hicks #55 in the first inning against the Texas Rangers at Globe Life Park in Arlington on May 8, 2018 in Arlington, Texas. (Photo by Ronald Martinez/Getty Images)</p>

ARLINGTON, Texas (AP) -- Victor Martinez and Jeimer Candelario homered in the first inning and the Detroit Tigers held off the Texas Rangers 7-4 Tuesday night, spoiling Adrian Beltre's three-hit game in his return from an injury.

Jose Iglesias connected on a two-run shot , his first of the season, for a 5-0 lead in the second against left-hander Mike Minor.

Beltre, MLB's active leader in hits, reached 3,078 with three singles after missing 12 games with a left hamstring strain. The 39-year-old hit run-scoring singles in the sixth and eighth to give him 1,652 RBIs, tying Tony Perez for 27th on the career list.

In his 21st season, Beltre became the active hits leader while on the disabled list when Ichiro Suzuki, with 3,089 hits, was removed from Seattle's 40-player roster last week for another role with the Mariners.

Mike Fiers (3-2), winless with an 8.90 ERA in six previous appearances against Texas, took a shutout into the fifth before Jurickson Profar's leadoff homer , his second. The right-hander gave up six hits and two runs with five strikeouts in 5 1/3 innings.

Shane Greene struck out the side after a leadoff single in the ninth for his first four-out save of the season and seventh overall in nine chances.

Martinez's third homer was a two-run shot after Candelario connected with the bases empty for his fifth. Candelario is tied for the team lead with leadoff hitter Leonys Martin, the former Texas center fielder who was out of the lineup because of left knee soreness.

TRAINER'S ROOM
Tigers: An MRI was planned for Martin after he showed up with swelling Tuesday. "That's a little alarming, and that's why we're getting it checked out," manager Ron Gardenhire said. ... RHPs Alex Wilson (plantar fascia strain in left foot) and Jordan Zimmermann (right shoulder impingement) went on the disabled list. RHP Zac Reininger and INF Pete Kozma were brought up from Triple-A Toledo. LHP Daniel Norris (left groin injury) was moved to the 60-day DL to clear a roster spot for Kozma.
Rangers: 2B Rougned Odor (left hamstring strain) was set for a rehab appearance with Triple-A Round Rock on Tuesday after going 1 for 5 in two games with Double-A Frisco. ... To make room for Beltre, the Rangers sent INF Eliezer Alvarez back to Frisco a day after calling him up.

UP NEXT
RHP Bartolo Colon (1-1, 3.29 ERA) makes his sixth start for the Rangers, coming off his first loss when the 44-year-old matched his career high by allowing four homers, all solo shots in Boston's 5-1 win. Tigers LHP Francisco Liriano (3-1, 2.97 ERA) is 5-3 with a save and a 4.03 ERA in 14 appearances at the home of the Rangers, including nine starts. Liriano faced Texas four times last year, three after Houston acquired him at the trading deadline.