Tigers homer twice in the ninth to stun Yankees 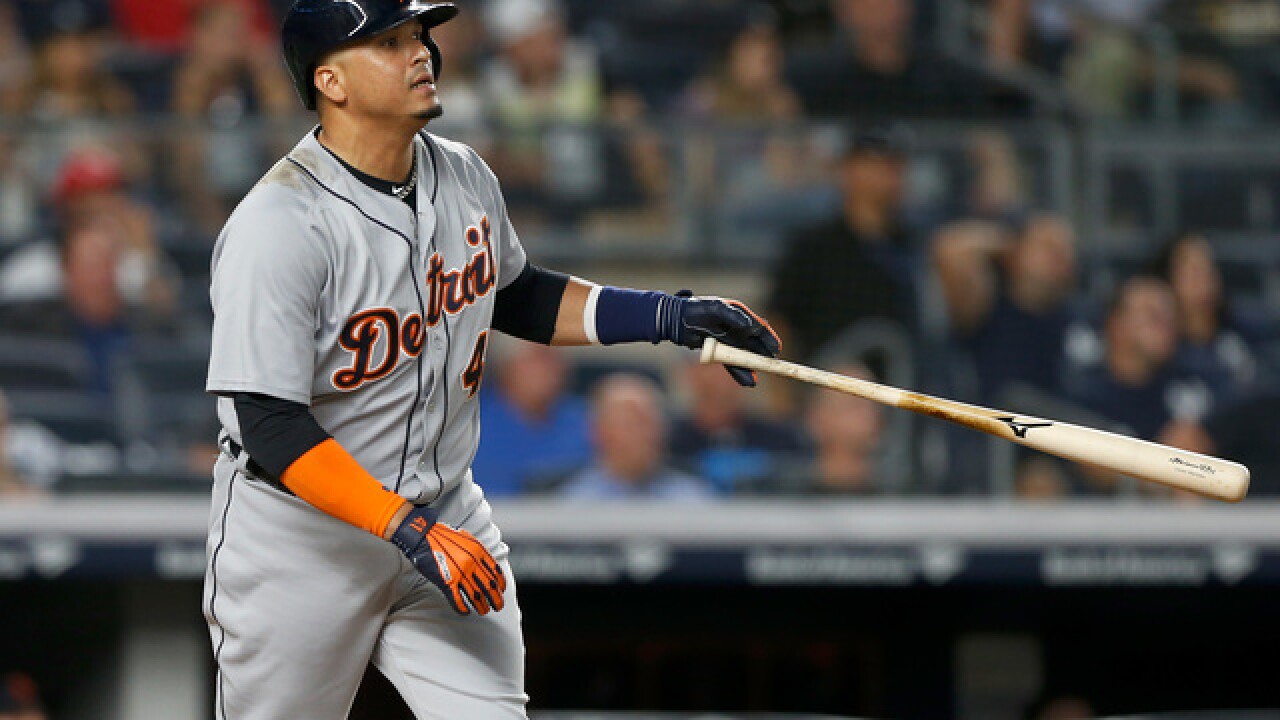 NEW YORK -- Victor Martinez hit his second home run of the game and Niko Goodrum followed with a homer off Dellin Betances in the ninth inning, rallying the Detroit Tigers past the New York Yankees 8-7 Thursday night.

The Tigers, last in the majors in home runs, connected five times and ended a five-game losing streak.

Giancarlo Stanton hit his 300th career home run for the Yankees, who have lost three of four. They began the day 7 1/2 games behind Boston in the AL East and 4 1/2 games ahead of Oakland for the top wild-card spot.

Luke Voit hit a two-run homer in the seventh that put the Yankees ahead 7-5.

But Betances (4-4) walked Nicholas Castellanos with one out in the ninth and Martinez lined a drive to right for his 12th career multihomer game.

The Tigers were down 7-5 in the ninth.

Goodrum followed with a flyball that curled around the foul pole. Betances had allowed a total of two runs in his past 35 appearances dating to late May, and had never given up two homers in a game.

Alex Wilson (2-4) earned the win with a perfect eighth and Shane Greenerecorded his 28th save.

Martinez hit a two-run homer in the fifth.

Jeimel Candelario led off the game with a home run against J.A. Happ, and Ronny Rodriguez also homered for the Tigers.

Gleybar Torres had a two-run homer for the Yankees off Francisco Liriano.

Stanton's two-run drive in the third came in his 1,119th game -- only Ralph Kiner, Ryan Howard, Juan Gonzalez and Alex Rodriguez have hit No. 300 faster.

Happ (107 wins) and Liriano (105 wins) are 19th and 20th among active pitchers in wins. Their matchup marked the 25th time this season a pair of pitchers with 100 wins opposed each other. Liriano has been involved in five such games while Happ has been in three.

Tigers: SS Jose Iglesias (abdomen) was placed on the 10-day disabled list. INF Dawel Lugo, one of the players the Tigers acquired from the Arizona Diamondbacks in the J.D. Martinez trade last year, was recalled and went 1 for 4 while starting at shortstop in his major league debut.

Yankees: C Gary Sanchez (groin) went 0 for 4 while catching all nine innings at Triple-A Scranton/Wilkes-Barre. The Yankees hope Sanchez, who has been out since July 24, can be activated Saturday. . SS Didi Gregorius (heel bruise) rested Thursday after hitting and taking ground balls Wednesday. . OF Aaron Judge (broken right wrist) ran and played catch but has yet to swing a bat.