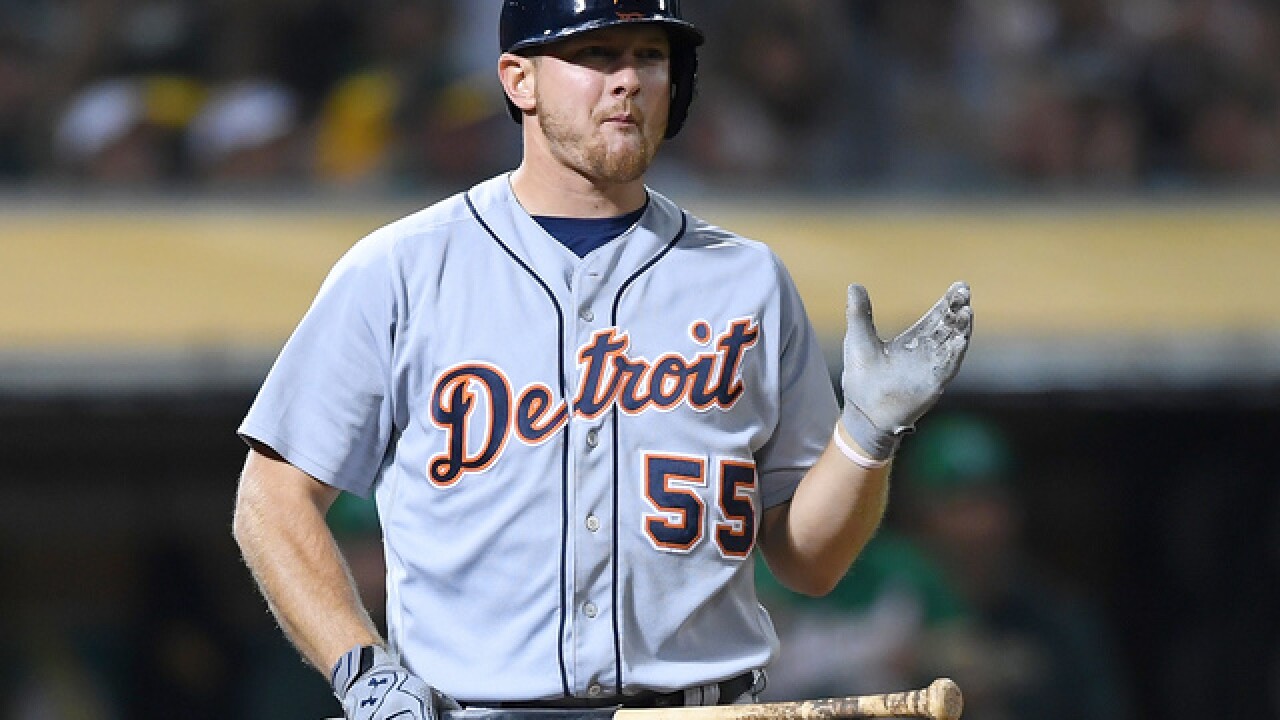 OAKLAND, Calif. (AP) — Ramon Laureano reached his hands out to each side and knew he had his first major league hit at last, a big one at that to end the game.

Laureano somehow forced himself to relax with the game on the line and two outs in the 13th inning, having already failed at the plate four times in his big league debut.

He came through this time as he singled home the winning run for his first major league hit, sending the Oakland Athletics past the Detroit Tigers 1-0 on Friday night.

“I’m shocked, I’m speechless,” he said. “It’s awesome. I could have never imagined it this way.”

After going hitless with two strikeouts before his milestone single, Laureano finally ended the game that went 3 hours, 32 minutes with a clean hit to right against Buck Farmer (3-4). Laureano clapped his hands and rounded the bases to be greeted with some star treatment.

Soon after, he took a celebratory pie in the face and a Gatorade shower from his teammates. Once inside, they got him with beer and tomato juice, “everything that you can imagine.”

The souvenir baseball and his bat will go home with his parents for safekeeping.

Jose Iglesias hit a two-out single in the top of the 13th against winner Emilio Pagan (3-0) and stole second. When catcher Jonathan Lucroy’s throw went into center, Iglesias tried for third and was got thrown out — a play that was upheld on replay review when the Tigers challenged.

Yusmeiro Petit pitched perfect 11th and 12th innings for the A’s, who remained in the lead for the second AL wild card.

Matt Olson doubled to start the 10th against Victor Alcantara but pinch-runner Franklin Barreto was thrown out at third.

Right fielder Stephen Piscotty made a beautiful run-saving catch to end the 10th on a liner by Iglesias.

Matt Chapman and Jed Lowrie hit back-to-back singles with one out in the ninth against Alex Wilson .

Blake Treinen struck out four over two innings on a night both starters shined but had nothing to show for it.

Tigers left-hander Blaine Hardy gave up Lowrie’s infield single to begin the seventh inning for the A’s first hit, ending a no-hit bid. Hardy had issued only a pair of walks to Olson — the first on a 13-pitch plate appearance in the second. Before the walk, Olson’s drive to right went to a crew chief review and was confirmed as sailing just right of the pole.

“As soon as that ball was hit by Lowrie kind of in the hole, I knew he’s got some speed, he’s going to be safe,” Hardy said.

Hardy struck out six over seven scoreless innings, done after a career-high 106 pitches in a 0-0 game.

A’s lefty counterpart Brett Anderson retired his first 16 batters in order before Iglesias doubled with one out in the sixth.

Until the winning run, only Iglesias had gone as far as third base.

Oakland won its fourth straight after sweeping Toronto on the heels of losing all three last weekend at Colorado.

The A’s are 5-0 against the Tigers this season after sweeping a set in Detroit from June 25-28.

Hardy was trying to win consecutive starts for the first time since May 27 and June 1, and he pitched well enough to win if the Tigers had scored for him.

Anderson allowed two hits, struck out and walked one in his fifth start since coming off the disabled list July 8 from a strained right shoulder.

Laureano played center field and batted eighth after his callup earlier in the day.

He ran into the wall in center to make a nice catch on No. 2 hitter Nicholas Castellanos’ deep fly in the first. Laureano ran forward the next time he made a play, going down to his right knee to catch Jeimer Candelario’s liner to end the second.

While he got a feel for how the Coliseum outfield plays, the hit meant so much.

“You couldn’t ask for a much better first hit,” Anderson said. “I’m sure he’ll remember that forever.”

Tigers: RHP Mike Fiers, whose name came up in trade chatter around the A’s at this week’s deadline, should make his next turn in the rotation with an extra day after leaving Wednesday’s game with a bruised left shin after taking a line drive against the Reds. ... LHP Daniel Norris, recovering from a left groin injury that has sidelined him since April 29, is still experiencing soreness and his status for the rest of the season is in doubt. “He’s got to be pain-free,” manager Ron Gardenhire said. ... RHP Michael Fulmer (left oblique strain) is in Lakeland, Florida, rehabbing. “We’ve told him to be calm in a lot of different ways,” Gardenhire said. “You can’t push this thing.”

Athletics: If Chad Pinder got through his Friday batting practice with no issues as he recovers from a laceration on his left elbow, the A’s plan to activate him from the disabled list ahead of the interleague opener at home against the Dodgers on Tuesday.

Tigers: RHP Jordan Zimmerman (4-3, 4.44 ERA) tries to end a three-start skid after going just three innings his last time out. He is 1-0 with a 2.60 ERA and eight strikeouts in his initial three career starts vs. the A’s.