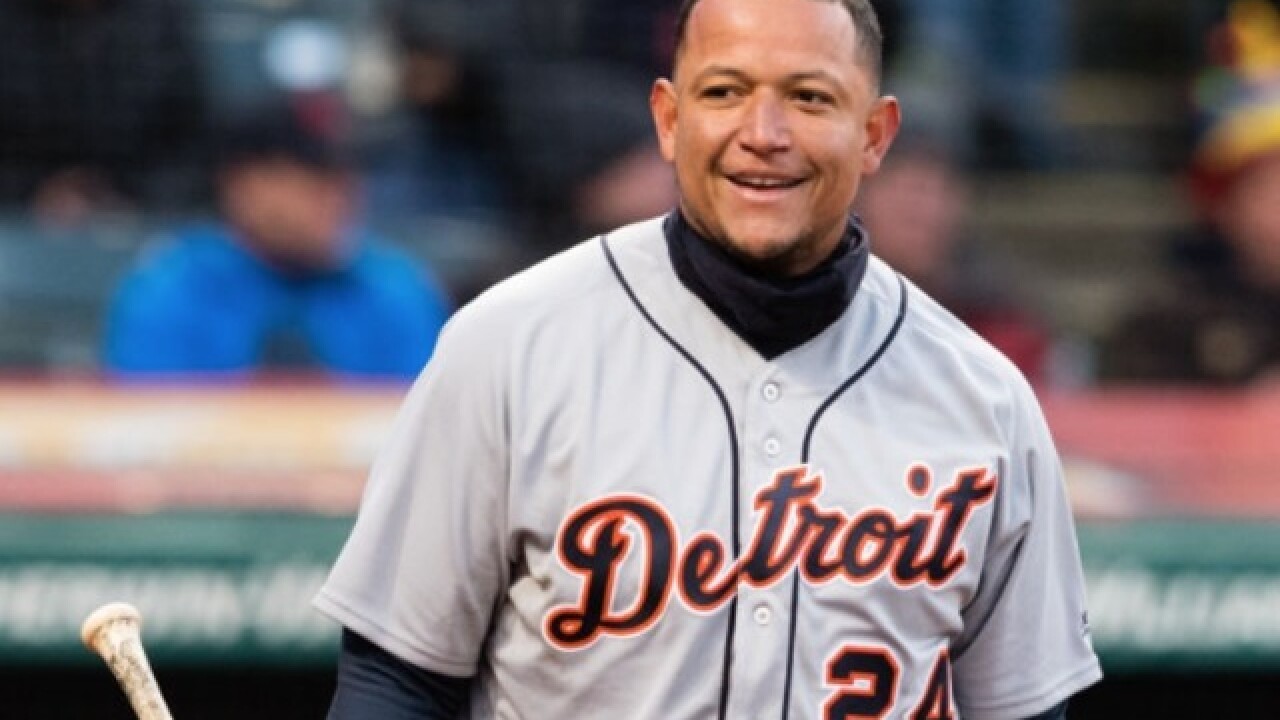 The temperature at first pitch was 33 degrees, one above Progressive Field's record low set Sunday. There were flurries before the game and again in the seventh inning, resulted in a crowd of 9,843.

Kluber (1-1) gave up singles to Victor Martinez in the second and Nicholas Castellanos in the fourth. The reigning AL Cy Young winner walked one and threw 103 pitches in recording the 40th double-figure strikeout game of his career.

Andrew Miller worked the ninth for his first save of the season, getting Miguel Cabrera on a game-ending double play.

Bradley Zimmer hit a two-run homer in the fifth off Francisco Liriano (1-1) as Cleveland's offense struggled again but used the long ball to win for the second straight day.

Kluber struck out the side in the fifth and fanned a batter in every inning except the sixth. Leonys Martin was the only batter who didn't strike out against Kluber.

The right-hander, who was 18-4 with an AL-leading 2.25 ERA last season, has pitched like an ace in his first three starts. Kluber allowed two runs in eight innings against Seattle, but got the loss thanks to Nelson Cruz's two-run homer. He gave up a two-run homer to Shohei Ohtani, the only runs he allowed in seven innings against the Los Angeles Angels in his second start.

Kluber put up his dominant numbers last season despite missing a month because of a strained back, an injury that seemed to catch up with him in the AL Division Series. He allowed nine runs, including four homers, in two starts and got the loss in Game 5 as the Indians blew a 2-0 series lead.

Liriano retired the first 10 hitters before walking Jason Kipnis and Jose Ramirez with one out in the fourth.

Yan Gomes, who hit a game-winning, two-run homer in the ninth inning Sunday against Kansas City, lined a two-out single to left for Cleveland's first hit in the fifth. Zimmer followed with his first home of the season that landed in front of the bullpens in center field.

Liriano allowed three hits in six innings. The Indians, who were held to four hits, are batting .158, the worst team average in the majors.

Tigers: RHP Buck Farmer was removed with a left hip spasm after walking Zimmer in the seventh inning.

Indians: OF Michael Brantley, who played three straight days after starting the season on DL following offseason ankle surgery, wasn't in the lineup. He will get planned off-days in early in the season.

Indians RHP Josh Tomlin (0-1, 24.00) had his turn in the rotation pushed back a day after experiencing back soreness in his start against the Angels when he allowed four home runs in three innings. Tigers LHP Matthew Boyd (0-1, 1.50 ERA), who has a 1.91 ERA in five career games at Progressive Field.