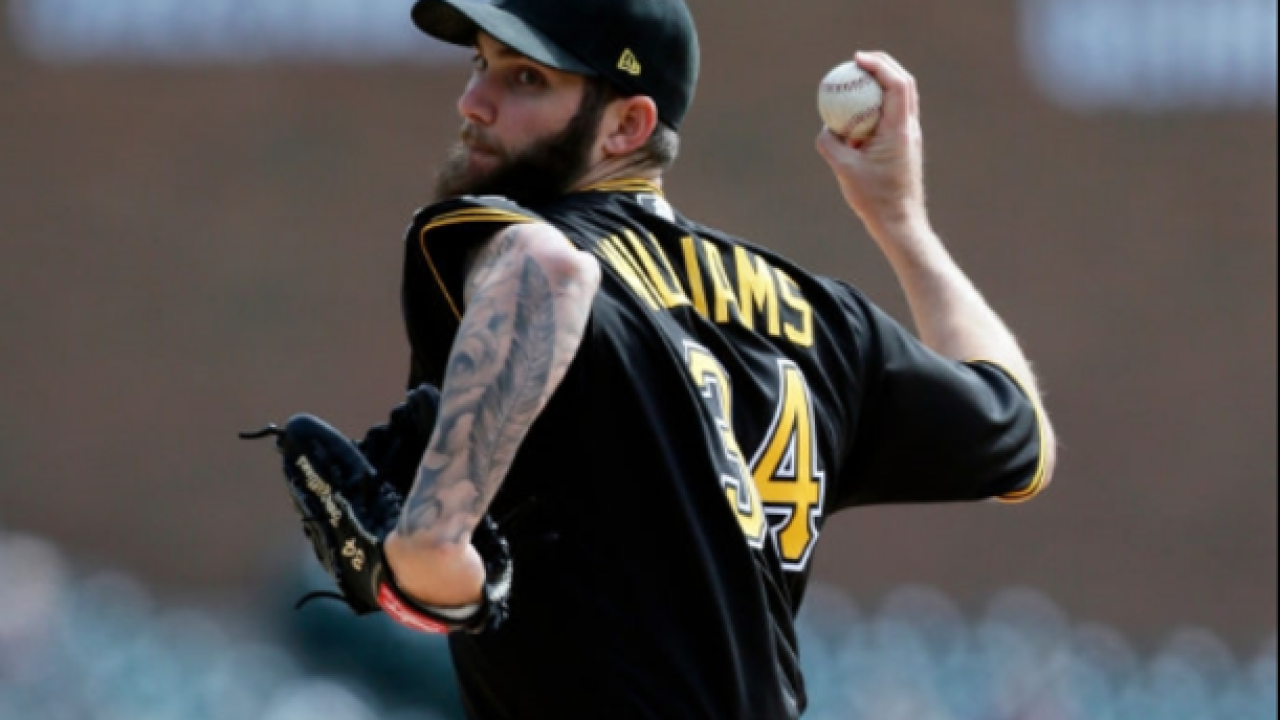 Copyright Getty Images
Duane Burleson
<p>DETROIT, MI - APRIL 01: Trevor Williams #34 of the Pittsburgh Pirates pitches against the Detroit Tigers during the second inning of game one of a double-header at Comerica Park on April 1, 2018 in Detroit, Michigan. (Photo by Duane Burleson/Getty Images)</p>

Williams was pulled with a no-hitter in progress after six innings, and Pittsburgh hung on to beat the Tigers 1-0 Sunday in the opener of a day-night doubleheader.

Williams (1-0) threw 84 pitches, his count boosted by five walks, and was replaced by Michael Feliz to start the seventh.

"I was playing Russian roulette all day with the walks, so I totally understood the move," Williams said. "It was 1-0 when I came out and it ended up 1-0, so it worked perfectly."

Michael Feliz took over the begin the seventh and Nicholas Castellanos quickly ended the team no-hit bid with a one-out double down the left-field line.

George Kontos pitched the eighth and Felipe Rivero struck out the side in the ninth for his first save, finishing the combined two-hitter.

Rivero allowed four runs while only getting two outs in Pittsburgh's 13-10, 13-inning win on Friday.

"It was great to be able to go out there and pick up the team after being so bad in the first game," he said. "I was trying too hard, but today I relaxed and just hit the mitt."

The doubleheader was caused by a rainout Saturday. This game drew 14,858 fans, the smallest crowd at Comerica Park since 12,415 saw the Tigers beat the Royals on May 2, 2006. Temperatures were expected to drop below freezing for the nightcap.

Williams has pitched 13 shutout innings in two career starts against the Tigers, allowing one hit.

"I don't really remember the game I pitched against them in August, but they've got future Hall of Famers in that lineup, so I'm not sure what is happening," he said.

His effort came a day after Minnesota's Kyle Gibson was taken out after throwing 102 pitches in six no-hit innings at Baltimore.

"There was no doubt in my mind," Pirates manager Clint Hurdle said. "With five walks and 84 pitches, it wasn't like he was going to get through nine innings, and we wanted to get to the bullpen."

Michael Fulmer (0-1) gave up one run on four hits and two walks in eight innings, striking out three.

"That was probably the coldest game of my big league career, but I handled it better than I expected," he said. "I was happy with how everything felt."

Gregory Polanco's RBI double gave the Pirates a 1-0 lead in the first, but he was thrown out trying to stretch it into a triple.

The Tigers grounded into two double plays in the first three innings, then ran themselves out of the fourth with an inning-ending strikeout/caught stealing double play.

Williams walked two batters in the fifth, forcing action in the Pirates bullpen, but he escaped the inning with two flyballs. He pitched a 1-2-3 sixth before giving way to Feliz.

TRAINER'S ROOM
Pirates: RHP Joe Musgrove threw 92 pitches in a Gulf Coast League game on Saturday and is expected to join the Pirates rotation later this week.
Tigers: RHP Mike Fiers (back) is scheduled to throw a simulated game Monday at Detroit's extended spring training facility and could come off the disabled list later in the week.

RIVERO BEATS CABRERA
Rivero went to a 2-0 count on Miguel Cabrera to start the ninth inning, but got three straight swinging strikes on fastballs.
"I was behind in the count, so he knew I was going to be throwing fastballs," Rivero said. "He just couldn't catch up with them."

UP NEXT
LHP Ryan Carpenter will make his major league debut for the Tigers in the second game, while RHP Chad Kuhl will pitch for the Pirates. Kuhl went 8-11 with a 4.35 ERA last season, allowing three runs in six innings of a win over the Tigers on Aug. 8.