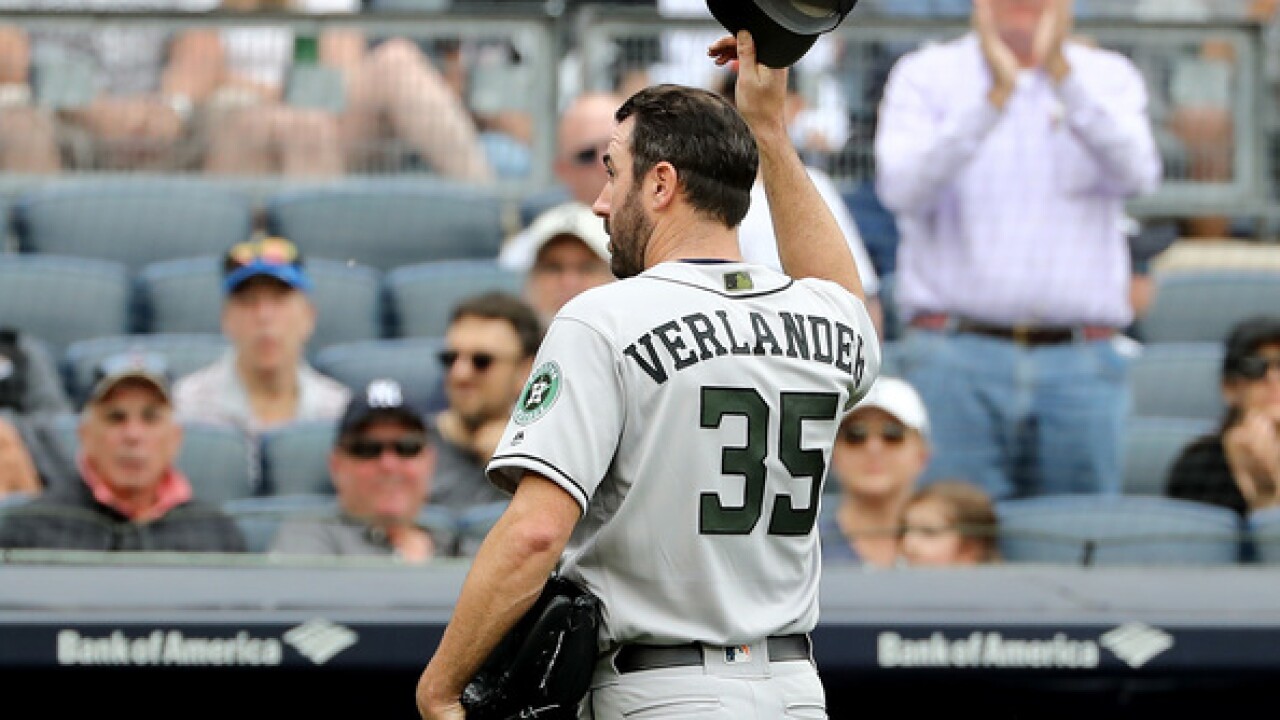 Copyright Getty Images
Elsa
<p>NEW YORK, NY - MAY 28: Justin Verlander #35 of the Houston Astros salutes the fans as he is pulled from the game in the seventh inning against the New York Yankees at Yankee Stadium on May 28, 2018 in the Bronx borough of New York City.MLB players across the league are wearing special uniforms to commemorate Memorial Day. (Photo by Elsa/Getty Images)</p>

NEW YORK (AP) — Justin Verlander tamed the Yankees again, slowing down the highest-scoring team in the majors and pitching the Houston Astros past New York 5-1 Monday.

Verlander exited in the seventh inning with a major league-best 1.11 ERA. J.D. Davis hit an early three-run homer and Jose Altuve had a solo drive, helping Houston win for the sixth time in eight games.

Closer Ken Giles, tagged Sunday as the Astros blew a five-run lead in the ninth at Cleveland, pitched the final inning and worked around a leadoff single.

Facing the only club in baseball that hasn’t been shut out this season, Verlander (7-2) blanked the Yankees until Greg Bird hit a leadoff home run in the seventh.

Hilarious. Justin Verlander tips his cap to the Yankees fans booing him. pic.twitter.com/JzTeixevIC

As he left, Verlander took off his cap and waved it toward a solid contingent of Astros fans wearing bright orange behind the dugout.

Verlander has done this before against the Yankees, especially lately. He was the MVP of the AL Championship Series last October, going 2-0 and limiting New York to one run in 16 innings while striking out 21.

Earlier this month, Verlander pitched eight shutout innings against the Yankees and fanned 14. This time, Verlander allowed five hits in 6 2/3 innings, fanning five without a walk.

In 12 starts this year, the big righty has permitted only 10 earned runs.

Yet for all the heat Verlander brought to the plate, the best toss he made might’ve been a throw in the opposite direction. The Astros led 3-0 when the Yankees put runners at first and second with two outs in the second.

With Miguel Andujar at the plate, Verlander pivoted and picked rookie Gleyber Torres off second base to escape.

Davis hit his first homer of the season, connecting in the second off Domingo German (0-3). Altuve, whose team-record run of 10 straight hits ended Sunday, added his fourth in the eighth.

Torres has been swinging a sizzling bat, and manager Aaron Boone moved him up to fifth, his highest spot in the lineup yet. The 21-year-old newcomer had an adventuresome afternoon.

Torres singled off Verlander, but got picked off. He nonchalanted a throw from second base, and the errant toss set up Evan Gattis’ RBI single in the fourth — Torres flung his glove in the dugout when the inning was over. Torres also made two acrobatic catches ranging into shallow center field.

Astros: OF Derek Fisher, out with what the team says is “gastrointestinal discomfort,” started a rehab assignment at Triple-A Fresno.