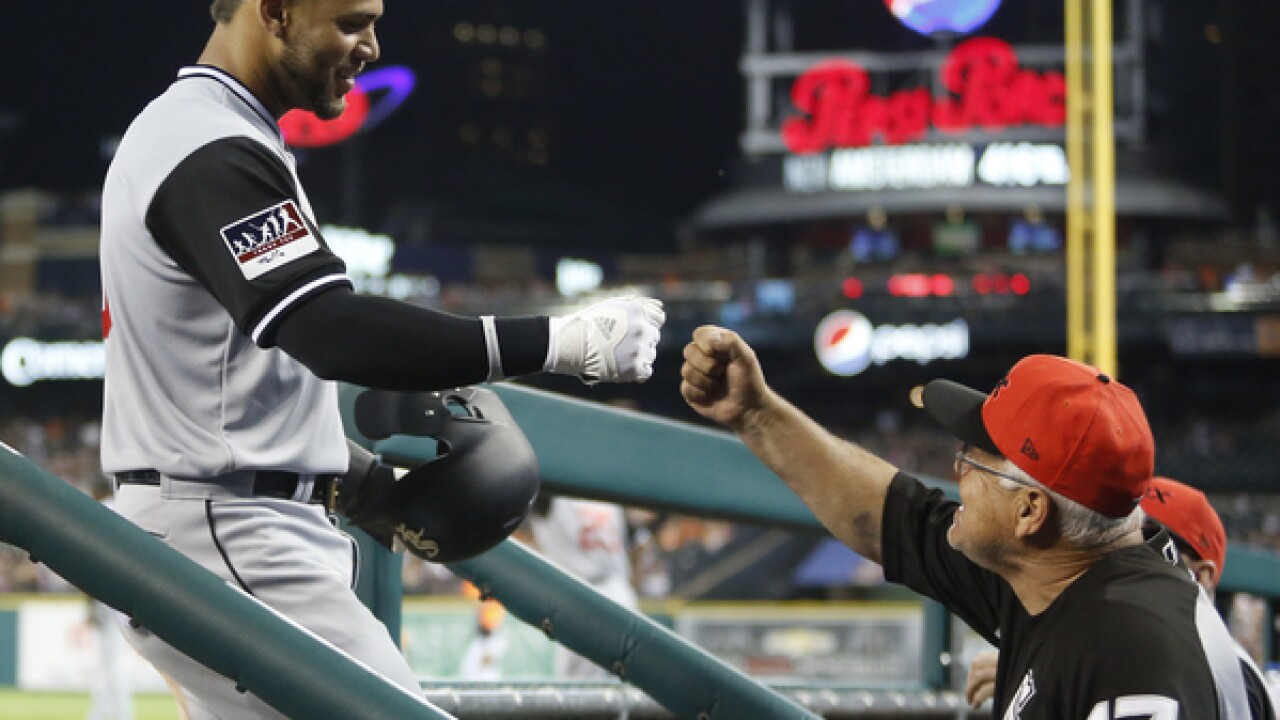 Copyright Getty Images
Duane Burleson
<p>DETROIT, MI - AUGUST 24: Yoan Moncada #10 of the Chicago White Sox celebrates with manager Rick Renteria #17 of the Chicago White Sox after scoring in the eighth inning to take a 4-3 lead over the Detroit Tigers at Comerica Park on August 24, 2018 in Detroit, Michigan. The teams are wearing their Players Weekend jerseys and hats. (Photo by Duane Burleson/Getty Images)</p>

DETROIT (AP) -- Arriving later than normal, Rick Renteria was a little surprised by the amount of traffic around the ballpark.

Once inside, he watched his offense do almost nothing for seven innings -- before a six-run eighth gave the Chicago manager a victory after a tough few days.

Yoan Moncada and Tim Anderson each hit a two-run double in the eighth, and the White Sox rallied for a 6-3 victory over the Detroit Tigers on Friday night in Renteria's return to the dugout. Renteria had missed four games after experiencing lightheadedness Monday in Minnesota.

"I can tell you right now that I am cleared to go, full tilt," Renteria said after Friday's game. "I'm going to keep it at that."

Renteria was released from a Minnesota hospital Tuesday. He spent time in Chicago, but on Friday the team said his medical tests were finished.

Bench coach Joe McEwing had been managing in Renteria's absence, and he was prepared to do so again. About two hours before the first pitch, he said Renteria was en route, but it wasn't clear when he'd be arriving. Renteria was in the dugout when Chicago batted in the top of the first.

"It was quite a bit of traffic out there around the ballpark. I didn't realize they closed everything off," Renteria said. "So then I got over by where the bus usually drops us off and took my suitcase out, and they escorted me into the media entrance. It actually was pretty easy, but it's just nice to get back to the ballpark."

Chicago was down 3-0 before breaking through against All-Star reliever Joe Jimenez (4-3) and closer Shane Greene. With one out in the eighth, Moncada hit a bases-loaded double that made it 3-2 and chased Jimenez.

Greene came on and allowed an RBI single by Avisail Garcia, an RBI double by Daniel Palka and Anderson's double that made it 6-3.

Thyago Vieira (1-0) got his first career victory. He retired the only batter he faced in the seventh.

The White Sox improved to 4-10 this season against Detroit.

Michael Fulmer allowed two hits in 4 2/3 innings for the Tigers in his return from a left oblique strain. Manager Ron Gardenhire had hoped to limit the right-hander to around 70 pitches. He ended up pulling him after 77.

"I'm just glad to be back. It was a shorter rehab than anyone expected, including me, so that was a positive," Fulmer said. "Everything felt good, but I would have liked to go a little longer. Gardy made the call so fast that I never got a chance to say anything -- I told him to wait a little longer so I look better next time."

Victor Alcantara and Daniel Stumpf combined to retire all seven of their hitters, but in the eighth, Detroit's more acclaimed relievers let the game slip away.

Nicholas Castellanos had two RBIs and also brought in the Tigers' other run with a double-play grounder.

"I wasn't feeling as good as I wanted," Lopez said through a translator. "For me it was a kind of challenge today to throw the first pitch for a strike."

Jose Iglesias singled past first baseman Nicky Delmonico in the first, giving the Tigers runners at the corners with nobody out. Castellanos hit into a double play, and Detroit took a 1-0 lead.

Castellanos added RBI singles with two outs in the third and seventh.

NO DECISION
It was a fifth consecutive no-decision for Lopez, who now has 13 of them on the season. Lopez has a 3.46 ERA in those 13 no-decisions.
Alcantara had a chance to pick up his first major league victory before Chicago's big eighth inning. The Detroit reliever is still 0-0 after 22 career appearances.

UP NEXT
The Tigers send LHP Ryan Carpenter (1-1) to the mound Saturday night against Chicago RHP Lucas Giolito (9-9). Giolito's 6.08 ERA is the highest in the major leagues for any pitcher who qualifies for the ERA title.