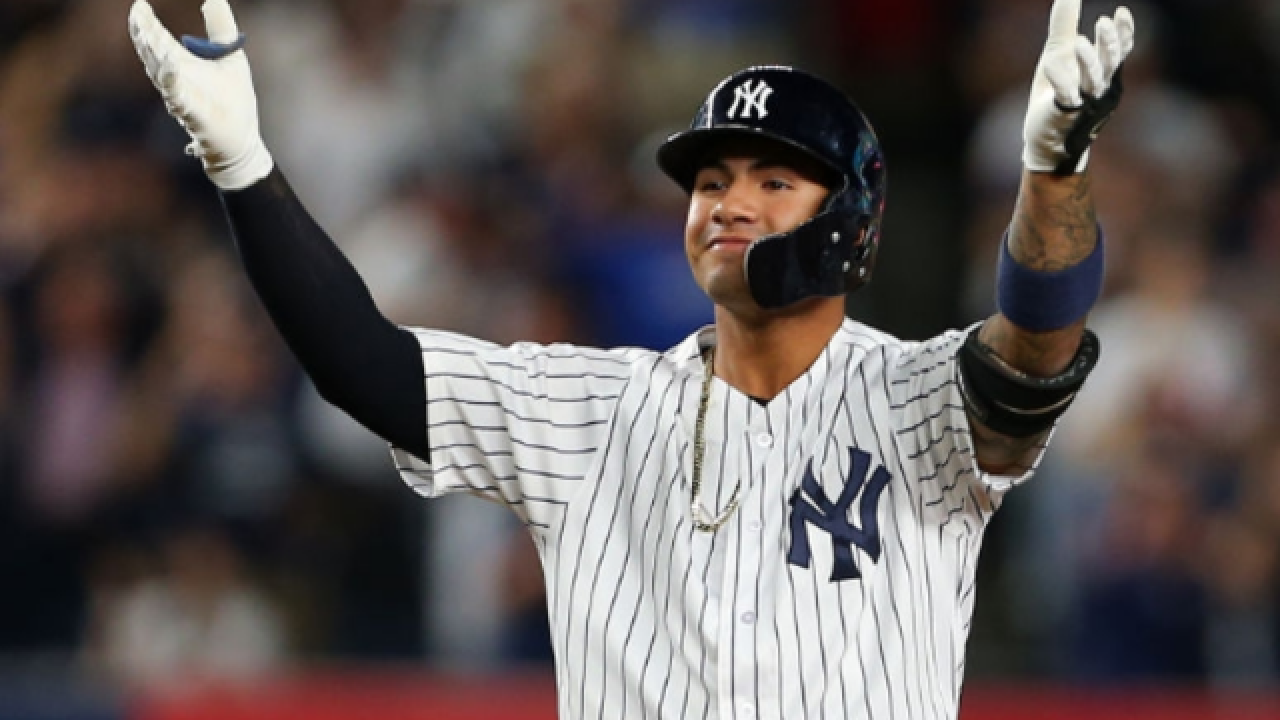 Copyright Getty Images
Rich Schultz
<p>NEW YORK, NY - AUGUST 31: Gleyber Torres #25 of the New York Yankees reacts after hitting a two-run single to put the Yankees ahead during the eighth inning against the Detroit Tigers during a game at Yankee Stadium on August 31, 2018 in the Bronx borough of New York City. The Yankees defeated the Tigers 7-5. (Photo by Rich Schultz/Getty Images)</p>

NEW YORK (AP) -- Gleyber Torres drove in the go-ahead run one batter after a contested check swing loaded the bases for New York in the eighth inning, and the Yankees beat the Detroit Tigers 7-5 on Friday night as they await the arrival of 2013 NL MVP Andrew McCutchen.

Yankees manager Aaron Boone fired up the crowd -- and got himself ejected -- for impersonating a catcher to show plate umpire Nic Lentz what he was missing in the fifth. Brett Gardner, Aaron Hicks and Miguel Andujar then homered in the sixth to end Jordan Zimmermann's bid for a second career no-hitter.

Boone gave the Bronx a jolt with his third ejection of his rookie season.  After Torres complained to Lentz during an at-bat, Boone was tossed a moment later for shouting from the dugout. Boone then came to home plate, put a finger in Lentz's face and squatted behind the plate and pretended to catch a pitch.

New York trailed 5-4 when it loaded the bases against Joe Jimenez (4-4) on a double by Gardner and walks by Hicks and Luke Voit. Voit was ruled to have checked his swing on a 3-2, two-out pitch. Tigers manager Ron Gardenhire was ejected for arguing that Voit went around.

Torres then lined an 0-1 pitch from Alex Wilson to left field for a single, and the ball ricocheted off the head of diving left fielder Mikie Mahtook, allowing two runs to score for a 6-5 Yankees lead. After an intentional walk to Neil Walker, Austin Romine brought in another run with an infield single.

David Robertson struck out Nicholas Castellanos and Victor Reyes with two on in the ninth for his fifth save.

New York had to rally after blowing a late lead for the second straight game. A night after Dellin Betances gave up two homers in the ninth of an 8-7 loss to Detroit -- Boone called that one "a kick in the stomach" --  Zach Britton (2-0) allowed a tying single to Mahtook in the seventh and a go-ahead, bases-loaded sacrifice fly to Ronny Rodriguez in the eighth that made it 5-4.

The banged-up Yankee lineup will get a boost Saturday. McCutchen is expected to join the team following a trade Friday from San Francisco, and catcher Gary Sanchez is set to return from the DL.

Zimmermann carried a 3-0 lead and a no-hitter into the sixth behind a solo homer from Niko Goodrum and a two-run triple by Jim Adduci.

After Romine reached via error, Gardner hit Zimmermann's 2-0 pitch over the right-field wall. Hicks added a no-doubt solo shot two batters later to tie it at 3, and Andujar made it 4-3 with a solo shot in the next at-bat.

New York starter Luis Severino was pulled in line for his major league-leading 18th victory, but instead took a no-decision after pitching three-run ball for six innings. He struck out 10.

DID HE GO?
As he walked back to the dugout after giving first base umpire Paul Nauert an earful, Gardenhire asked Voit "did you swing?" It's unclear what Voit said, but Gardenhire then gave him a wry smile.

REINFORCEMENTS COMING
McCutchen will handle right field duties until slugger Aaron Judge returns from a broken right wrist.
"We're getting a really good player," Boone said, adding that "I think his reputation precedes him. This is as high a character person as we have in our game and I know he'll fit well in our room."
Sanchez is returning from a groin injury. The 2017 All-Star is hitting just .188 with 14 homers in 66 games this season, but Boone has praised Sanchez's improved conditioning during his recovery process.
"I think we're getting potentially a front line player and a guy that will be an absolute presence in our lineup," Boone said of Sanchez.

TRAINER'S ROOM
Tigers: LHP Daniel Norris will be activated from the DL to start Saturday. He's been out since having groin surgery May 3. ... Detroit activated LHP Blaine Hardy (left elbow tendinitis) from the DL. ... SS Jose Iglesias has a strained lower abdominal but testing showed no tears, meaning he should be able to return in 10-14 days.
Yankees: Boone said top prospect LHP Justus Sheffield would likely not be among the players New York calls up Saturday when rosters expand.