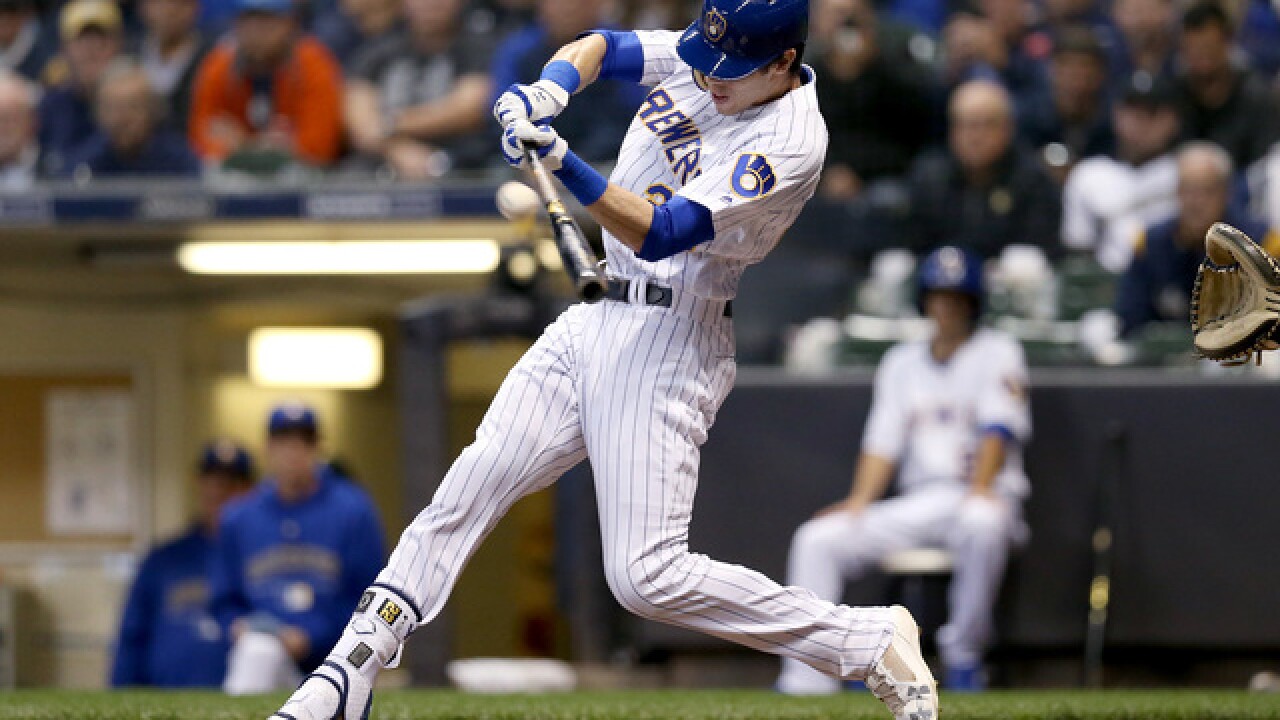 MILWAUKEE (AP) -- The Milwaukee Brewers moved into a tie for first place in the NL Central with one game remaining in the regular season, getting two homers from MVP candidate Christian Yelich to beat the Detroit Tigers 6-5 on Saturday night and draw even with the Chicago Cubs.

Yelich turned on an 0-1 pitch from left-hander Daniel Stumpf (1-5) and lined it into the second deck in right to break a 5-all tie in the seventh inning. The left-handed slugger also hit a two-run homer in the third inning of the Brewers' sixth straight win.

The Brewers (94-67) were already assured of making their first playoff appearance since 2011, the last time they won the NL Central. They sure would like to get into the postseason again as a division winner, and Chicago opened the door by losing 2-1 to St. Louis earlier Saturday.

Milwaukee just might have the best player in the National League, too.

Yelich extended his hitting streak to 10 games, going 2 for 3 and driving in three.

The NL leader batting leader is also challenging for a Triple Crown , tied with St. Louis' Matt Carpenter for the home run lead at 36. With 109 RBIs, Yelich is two behind the Cubs' Javier Baez.

The raucous fans at Miller Park chanted "MVP! MVP!" after Yelich's go-ahead shot in the seventh. He obliged with a brief curtain call, lifting his helmet in the air about halfway up the dugout steps.

Joakim Soria (3-1) got the win with a scoreless seventh. Jeremy Jeffress picked up his 15th save, striking out the side in the ninth.

The bullpen held the Tigers scoreless over the final three innings after a few shaky moments in the middle of the game.

Seventh-place hitter Dawel Lugo lined a triple into the right-field corner to lead off the sixth. Pete Kozma, a .209 hitter, then drove in Lugo with a sacrifice fly to left to tie the game at 5.

But the Brewers bounced back behind Yelich, just like they did after coming back from a 3-0 hole in the third.

Yelich homered into the Brewers' bullpen in left after leadoff hitter Lorenzo Cain hit an infield single to draw within 3-2. The Brewers strung together four straight hits in a three-run fourth, capped by Kratz's two-run single.

Niko Goodrum had an RBI single in the first and a two-run triple down the right-field line in third to give the Tigers a 3-0 lead.

Starter Daniel Norris retired eight of the first nine batters before running into trouble after giving up Cain's infield single with two outs in the third.

TRAINER'S ROOM
Tigers: After sitting out Friday, OF Christin Stewart was shut down for the final two games of the weekend with an abdominal strain.

UP NEXT
Tigers: Rookie Spencer Turnbull (0-1) takes the mound for the season finale. The right-hander recorded his first quality start in the majors on Tuesday, allowing one run on six hits in six innings against Minnesota.
Brewers: Manager Craig Counsell said before the game he was unsure who would start.