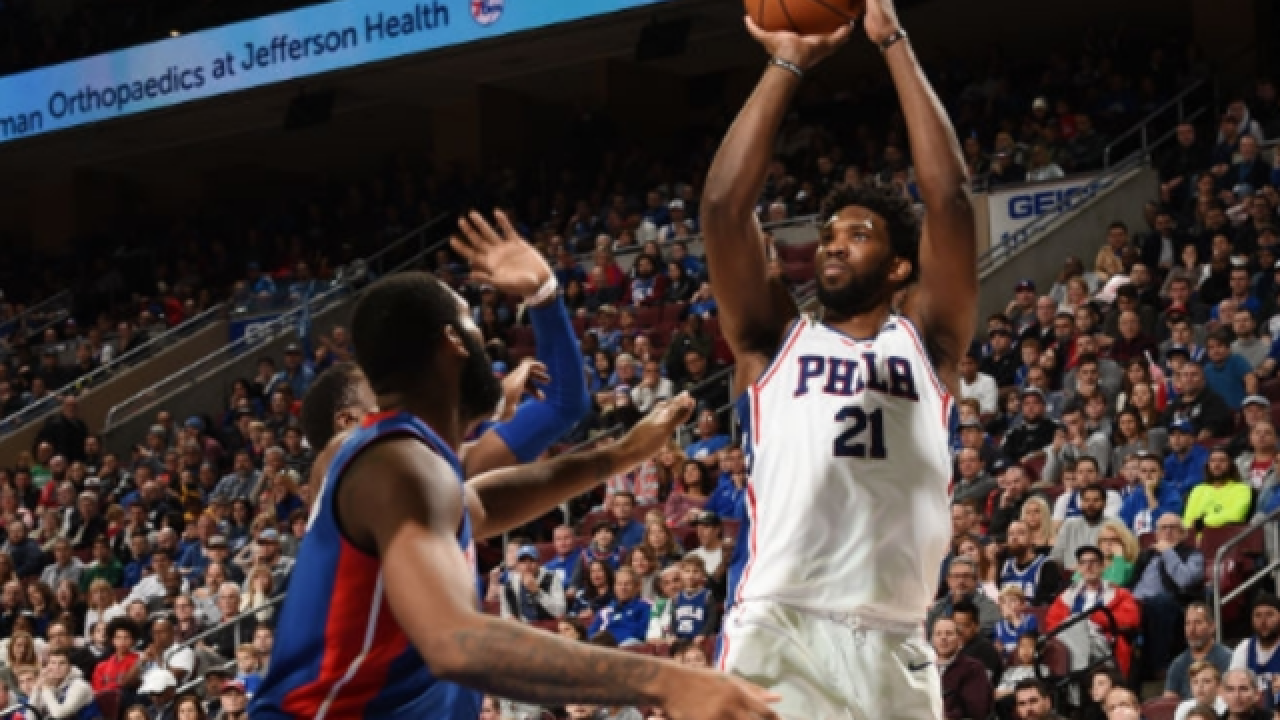 PHILADELPHIA (AP) -- Joel Embiid scored 32 of his 39 points in a dominating first half and had 17 rebounds to lead the Philadelphia 76ers to a 109-99 victory over the Detroit Pistons on Saturday.

Blake Griffin had 38 points, 13 rebounds and six assists to lead Detroit, which lost its fourth in a row after starting the season with four consecutive victories.

Embiid's first-half numbers were astounding. He made 8 of 9 shots, including his only 3-point attempt, and 15 of 17 free-throw attempts with eight rebounds and two blocks in 17 minutes in a one-sided duel with Detroit center Andre Drummond.

Drummond and Embiid have butted heads throughout their careers, including Oct. 23 in the Pistons' 133-132 overtime victory.

Drummond was ejected in that game for receiving a second technical, ostensibly for making contact with Embiid's head on a foul late in the fourth quarter. However, the NBA rescinded the technical the following day and issued Embiid a warning for flopping. Embiid called out Drummond after the game, saying the Detroit big man couldn't guard him and telling reporters he "owned real estate" inside Drummond's head.

The highly anticipated rematch was one-sided as Drummond was no match for the Philadelphia big man, going scoreless in four foul-plagued minutes in the opening half and finishing with eight points and nine rebounds in 21 minutes.

Embiid went right at Drummond early on Saturday, drawing a foul just 1:24 into the contest and then a second on Drummond 1:16 later. The Philadelphia big man held up two fingers after that one, letting everyone know Drummond had picked up his second, and Drummond exited to the bench for Zaza Pachulia.

Pachulia was no match for Embiid either, drawing four fouls in 10 first-half minutes.

The 76ers' lead grew to as many as 24 points, 58-34, when rookie Landry Shamet converted a three-point play after draining a 13-foot jumper and the ensuing free throw.

The Pistons scored the first 13 points of the second half over 3:55 as Philadelphia went 0-for-5 with three turnovers to start the third period. That surge cut Detroit's deficit to nine, 69-60, but the 76ers' advantage built up in the opening 24 minutes proved to be too great. Even with Embiid going scoreless in the third quarter and with him and fellow star Ben Simmons sitting for much of the period due to foul trouble, the 76ers took an 85-72 lead into the fourth.

Detroit got as close as down five with 4:48 remaining before an Embiid layup and J.J. Redick 3-pointer pushed the lead to a comfortable 10 points.

TIP-INS
Pistons: Guards Reggie Bullock (ankle) and Luke Kennard (shoulder) did not play. . Langston Galloway, who starred collegiately at nearby Saint Joseph's University, had 13 points off the bench. . Griffin had a career-high 50 points in the Oct. 23 win.
76ers: Embiid had 41 points in Philadelphia's 122-113 win over the Clippers on Thursday. . Director M. Night Shyamalan was in attendance as were Philadelphia Eagles TE Zach Ertz and WR Alshon Jeffery.  . F Wilson Chandler made his debut, going scoreless with four rebounds in 10 minutes. Chandler missed the first nine games with a hamstring injury. . Simmons didn't play in the Oct. 23 loss due to back tightness.

UP NEXT
Pistons: Host Miami Monday.
76ers: At Brooklyn Sunday.