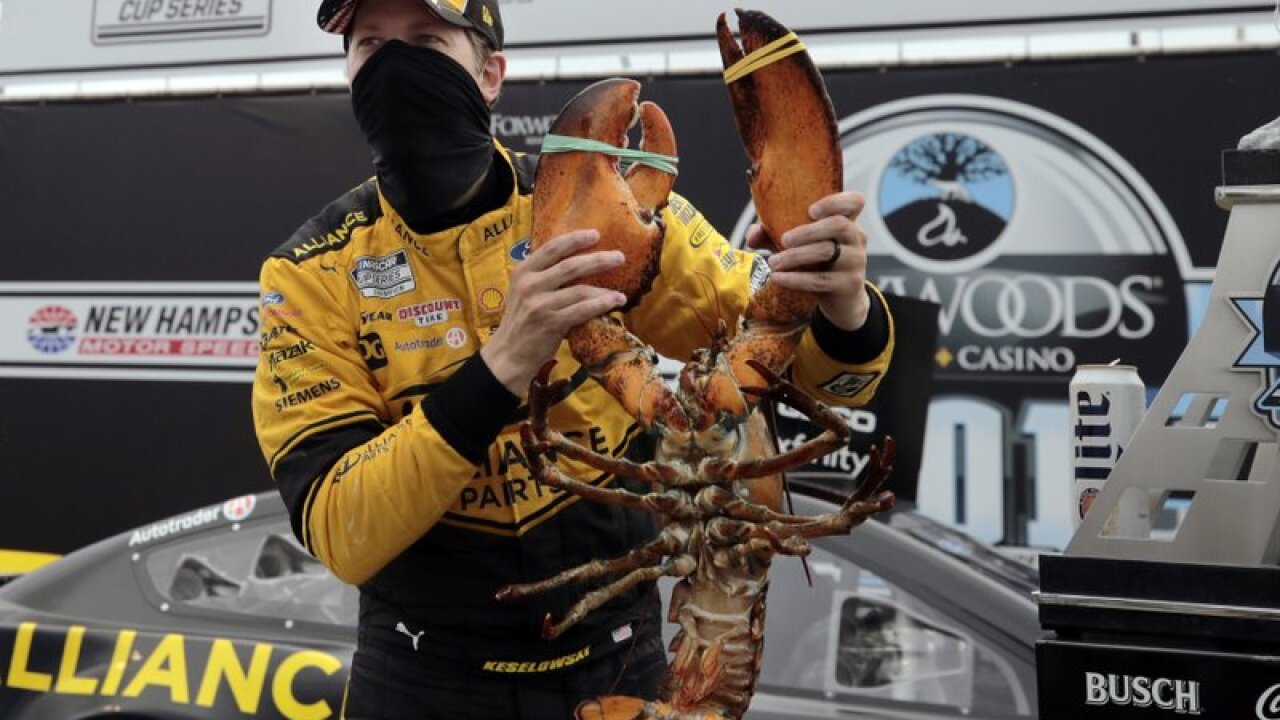 LOUDON, N.H. (AP) — With about 70 laps to go in his back-and-forth battle against Brad Keselowski, Denny Hamlin radioed in to his team: “This is awesome racing.”

The 2012 Cup champion took the checkered flag at New Hampshire Motor Speedway on Sunday, beating Hamlin by 1.647 seconds after trading the lead with him for most of the 301-lap race.

The two swapped stage wins and held the lead a combined 18 times before Keselowski claimed his third victory since the sport returned from the pandemic shutdown, along with the now-traditional prize of a 18-pound, live lobster. Afterward, Keselowski grabbed a U.S. flag and spun his car around in front of a crowd that spent most of the race masked and socially distanced before crowding the fence to chant “Brad! “Brad!”

“It’s so great to be racing back in front of fans again. It feels like forever, so welcome back, guys,” said Keselowski, who is in a contract year at Team Penske. “We’re just so glad to have them all back. It feels so weird to be racing without fans, but we’re glad you’re here. I hope you stay safe and thank you for being here.”

Hamlin also finished second in New Hampshire last year following a sprint to the finish that left him 0.210 seconds behind Kevin Harvick. Hamlin has five victories this year, including last week in Kansas.

“It was fun racing those guys. They were very very deserving today and I’m happy for them,” he said. “The two best cars finished 1-2 today and they got the better end of it. I was having a good time there.”

Martin Truex Jr. was third after working his way back from the rear of the field because of a penalty for a runaway tire in the pits. Joey Logano was fourth and Harvick fifth.

“When those things happen, you just have to buckle down and get what you can get,” Truex said. “Fortunately, we were able to come back from it.”

Kyle Busch was last after a flat front right tire on the backstretch sent him skidding into the wall after just 15 laps. The reigning Cup champion is a 12-time winner in New Hampshire, including three in the top series.

“About halfway down the backstretch I felt it go flat and tried to get slowed down enough without taking everybody else running over me behind me down the straightaway,” he said. “Seems to be our luck with the Pedigree car here at New Hampshire. ... It’s still 2020, but sooner or later we have to turn this stuff around.”

The track has a capacity of 76,000, but Gov. Chris Sununu said last week that he expected about 12,000 fans to attend. A track spokeswoman said attendance would not be announced, but it appeared to be about 10% full.

The governor gave a brief welcome before the race and thanked fans for cooperating with the restrictions. Fans were required to wear masks when making their way around the track but could remove them in their seats.

Hamlin won the first stage after fighting for the lead with Keselowski and Ryan Blaney. Keselowski took the second stage, passing Hamlin on the final lap of a two-lap sprint following a series of cautions late in the stage. It was his sixth stage win – the most of any driver.

Keselowski appeared to get the worst of a preseason staffing shuffle when he got the least accomplished of the three Penske crew chiefs. But Jeremy Bullins has focused on helping Keselowski win races and earn a contract extension.

“Talking to Jeremy Bullins, it was, ‘What do we need to do to get to the next level?’ Go dominate a race, and that’s what we did today,” Keselowski said. “Jeremy and this team has been a good kick in the butt.”

In his last start in New Hampshire, where he swept the Cup Series events in 2003, Jimmie Johnson recovered from an early spin to finish 12th. The seven-time NASCAR champion finished the day 18th in the playoff race -- below the cut line -- and has only six races left to make up ground.

Johnson, who has said this will be his last year as a full-time Cup driver, was presented with a replica Revolutionary War musket as a parting gift, and “Thanks Jimmie 48” was painted on the inner wall. A trail on the property was named the Jimmie Johnson 5K trail for the fitness nut, who ran in the Boston Marathon last year.

Bubba Wallace and Corey LaJoie were sent to the back of the grid because of improperly mounted ballast that was discovered during pre-race inspection. Both crews were also docked 10 points in the driver and owner standings.

Wallace finished 23rd. He is also a free agent, and Richard Petty Motorsports co-owner Andrew Murstein said earlier Sunday that the team had offered Wallace an ownership stake as part of a proposed extension.