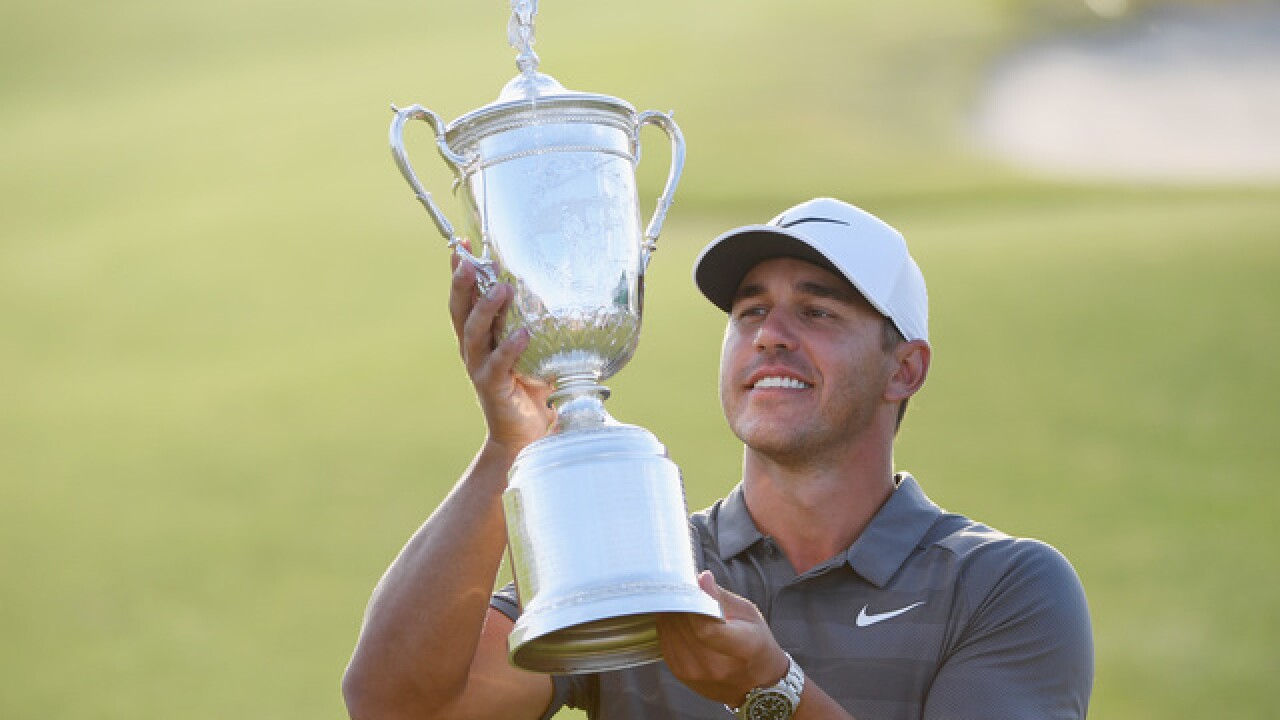 SOUTHAMPTON, N.Y. (AP) — One was about power. The other was about patience.

He never lost hope when he began his title defense with a 75 and was 7-over par midway through the second round. He didn’t lose his mind in the most punishing third round of a U.S. Open in nearly two decades.

And with a cool head and a hot putter, he didn’t give anyone a chance down the stretch Sunday at Shinnecock Hills.

Brooks Koepka goes back-to-back at the US Open. pic.twitter.com/RJtXfhIRAo

Koepka pulled away from a four-way tie for the lead with three birdies in five holes, held off Tommy Fleetwood and his record-tying 63 and closed with a 2-under 68 for a one-shot victory to become the first repeat U.S. Open champion in 29 years.

“I don’t want to say I didn’t think I could do it,” Koepka said. “But I knew that it was going to be that much more difficult. And to finally do it, it’s much more gratifying the second time. I can really appreciate how hard it is to win a major.”

Koepka won with birdies on spacious Erin Hills last year. The signature moment from this U.S. Open was a trio of putts to escape trouble on the back nine — two for par, one for bogey.

“I enjoy being pushed to the limit,” Koepka said. “Sometimes you feel like you are about to break mentally, but that’s what I enjoy. I enjoy hard golf courses. I enjoy playing about the toughest in golf you are ever going to play.”

Shinnecock Hills was every bit of that, particularly on Saturday when conditions were so severe that the last 45 players to tee off shot over par. The USGA conceded the course was over the top and pledged to add water to slow it down. Fleetwood raced into U.S. Open history with a 63, without making birdie on the two par 5s and missing an 8-foot birdie putt on the final hole.

That cost him more than the record. It cost him a chance in a playoff.

Koepka took a two-shot lead with a wedge to 3½ feet for birdie on the par-5 16th, allowing him a safe bogey on the final hole to finish at 1-over 281. It was the first time since 2013 at Merion that no one broke par, and it was 13 shots more than his winning score at Erin Hills.

Curtis Strange, the last player to go back-to-back in this major in 1988 and 1989, watched the entire final round as the Fox Sports reporter on the ground, and they shared a brief hug off the 18th green.

“Hell of a job,” Strange said to him.

Fleetwood was one shot behind when he finished, and Koepka still had 11 holes to play as Shinnecock Hills began to get crisp under another sunny sky.

With a putting performance and calm demeanor reminiscent of Retief Goosen when he won the previous U.S. Open at Shinnecock Hills, in 2004, the 28-year-old Koepka began the back nine with three pivotal putts — one for birdie, one for bogey, one for par.

The biggest might have been his bogey on the nasty little par-3 11th.

Koepka pulled a pitching wedge to the left, down the slope and into thick grass. He chopped that up the slope with so much speed that it raced across the green and into the bunker. He blasted that out to 8 feet and made the putt to keep his lead at one shot.

“I think that was like making a birdie, maybe even making an eagle,” he said. “Because it could have been a big momentum shift there, and we could have been playing tennis just going back and forth. To make bogey there was pretty incredible and I think kind of the reason why we won.”

He wasn’t through. He hacked out of the hay over the green at No. 12, pitched beautifully to 7 feet and made the par. Two holes later, after another drive into grass so thick he wasn’t sure he could get it out, Koepka rolled in an 8-footer for another par save.

"Next year, I'm not gonna get him anything either. It might bring some good luck." pic.twitter.com/2IsYfWe9vd

Fleetwood played with Koepka in the final group last year at Erin Hills. He finished his round as Koepka was finishing up the par-3 seventh.

“The best players in the world are up there trying to win a U.S. Open, and watching them down the stretch, you’ve got nothing but respect for how well Brooks did, just to hole the putts at the right time,” Fleetwood said. “He kept it together, and he’s a world player. He’s one of the best players in the world. It wasn’t great for me, but it was great as a golfer to watch how he did it.”

Koepka moved to career-best No. 4 in the world with his fifth victory, this one coming two months after he returned following torn tendons in his left wrist that kept him out the first part of the season, including the Masters.

Dustin Johnson, part of the four-way tie for the lead to start the final round, couldn’t keep up with one of his best friends. Johnson was one shot behind at the turn until a trio of three-putt bogeys on the back nine. A birdie on the final hole gave him an even-par 70 to finish alone in third and remain No. 1 in the world.

A year ago, Johnson called him on the eve of the final round to offer advice. On Sunday, they were playing side by side without exchanging words, each trying to play a course that was considerably softer than the previous day.

“We didn’t really speak too much,” Koepka said. “He was busy grinding his tail off and I was busy grinding mine. We’re extremely close. I love the guy to death. It would have been fun to duel it out with him coming down the end, having to make some putts.”

Only one of them did. Koepka took 14 fewer putts than Johnson on the weekend.

Masters champion Patrick Reed flirted with the second leg of the Grand Slam. He was tied for the lead when he ran off five birdies in his opening seven holes. Reed spent too much time in the high grass on the back nine and closed with a 68 to finish fourth.

Americans have won the last five majors — all of them in their 20s — and Koepka joined an elite group as only the seventh player to go back-to-back in what is regarded as golf’s toughest test. Next up is Pebble Beach, and a chance to join Willie Anderson as the only player to win three in a row. Anderson won his third straight in 1905. Ben Hogan won three straight that he played, missing in 1949 after nearly getting killed when his car struck a bus.