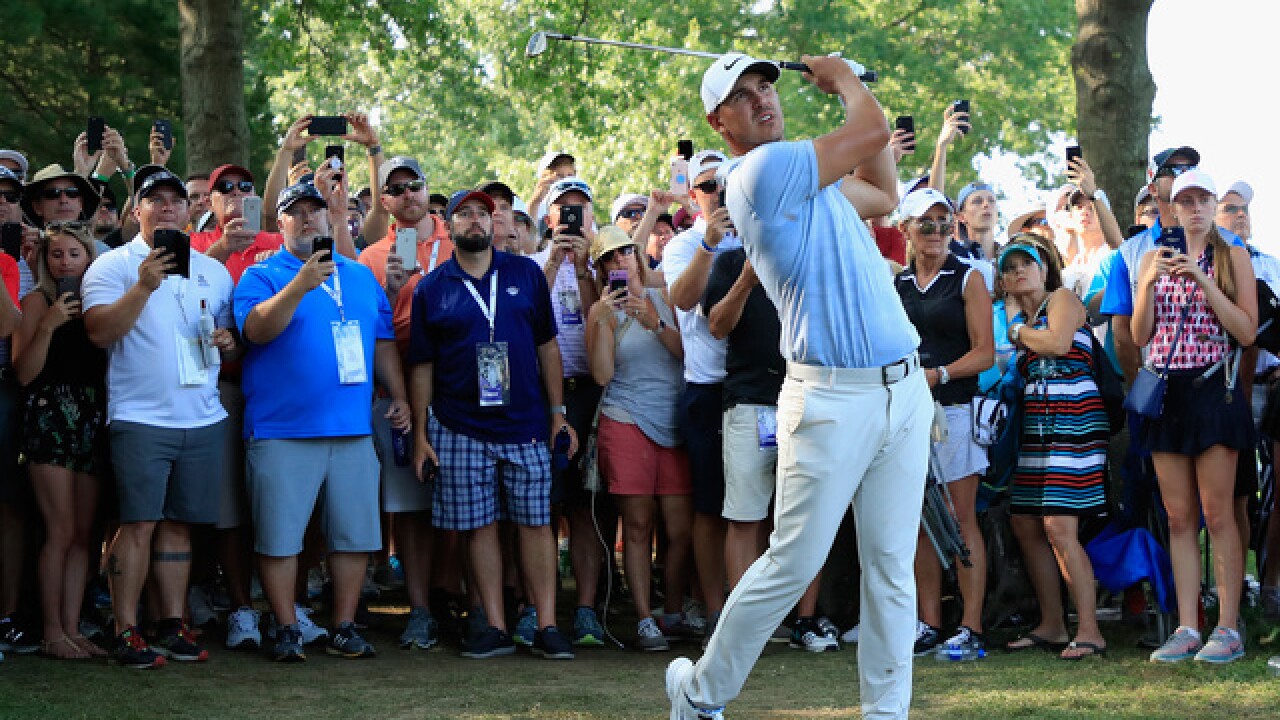 Copyright Getty Images
Andy Lyons
<p>ST LOUIS, MO - AUGUST 11: Brooks Koepka of the United States plays a shot on the 15th hole during the third round of the 2018 PGA Championship at Bellerive Country Club on August 11, 2018 in St Louis, Missouri. (Photo by Andy Lyons/Getty Images)</p>

Koepka bullied rain-softened Bellerive on Saturday on the front nine and built a four-shot lead, only to run into bad patch that brought a strong list of contenders into the mix -- including Tiger Woods -- going into the final round of the PGA Championship.

Even with back-to-back bogeys on the back nine, Koepka had a 4-under 66 for a two-shot lead over Adam Scott, the 2013 Masters champion who has been struggling through his worst season in nearly two decades. Scott had a 65 to get into the final group.

Gary Woodland lost his way in his footprints in a bunker and made triple bogey on No. 10, falling six shots behind, and still managed a 71 to stay within three shots of the lead, along with Jon Rahm (66) and Rickie Fowler (69).

The biggest buzz, as always, belonged to Woods.

Coming off a three-putt bogey on the fifth hole, Woods ran off three straight birdies to get in range, only to stall on the back nine like he has done so often this year. He hit a 4-iron so pure on the par-5 17th hole that he immediately began walking off to it, and thousands of fans roared when it settled 20 feet from the hole for an eagle that could have brought him within one of the lead.

He missed. And then he missed the next from 4 feet for birdie and ended his day with 10 straight pars. Woods had to settle for a 66, and by the time everyone else came through the 17th hole, he slipped back to a tie for sixth, four shots out of the lead.

That's the same position he was in going into the final round of the British Open at Carnoustie, where he led briefly in the final before fading.

Now he gets another shot, and it most likely will take another round like Saturday.

"Not just myself, but everyone's going to have to shoot low rounds," Woods said. "It's soft, it's gettable, and you can't just go out there and make a bunch of pars."

Koepka was at 12-under 198 and will play in the final group of a major for the first time. He won in the penultimate group at the U.S. Open each of the last two years.

He already burnished his reputation two months ago by winning a U.S. Open on two entirely different courses -- one at Erin Hills with a record-tying score of 16-under par, the other at Shinnecock Hills where he survived to win at 1-over par.

He has only one other PGA Tour victory, one in Europe and two in Japan. But put him against the strongest fields and the biggest events, and he's a world-beater.

This test figures to be different.

Bellerive is so soft that a charge can come from anywhere.

"I've watched Tiger win 14 of these things hanging around a lot of the time," Scott said. "He ran away with a few, for sure, but he hung around for a lot. And I would love to hang around tomorrow. And that might mean shooting 5 under again to hang around, but I would love to be in the mix coming down the stretch and have the chance to hole some putts to win."

Ten players were within four shots of the lead, which includes defending champion Justin Thomas (68), Jason Day (67) and Stewart Cink, the 2009 British Open champion who played with Woods and matched his 66.

"It's a pretty intense environment out there. It's fun," Cink said. "Hearing the crowd, and Tiger's performing great, it was like turning back the hands of the clock."

Woods and Fowler were among those just happy to get off the course. They had to finish their second rounds on Saturday morning because of rain that deluged Bellerive late Friday afternoon. Woods played 29 holes, while Fowler played 26.

No one caught Woodland, meaning his 36-hole score of 130 stood as the PGA Championship record. The cut was another record, coming at even-par 140 and knocking out the likes of Phil Mickelson. That means Mickelson will fail to automatically qualify for the Ryder Cup team for the first time since his first full season on the PGA Tour in 1993.