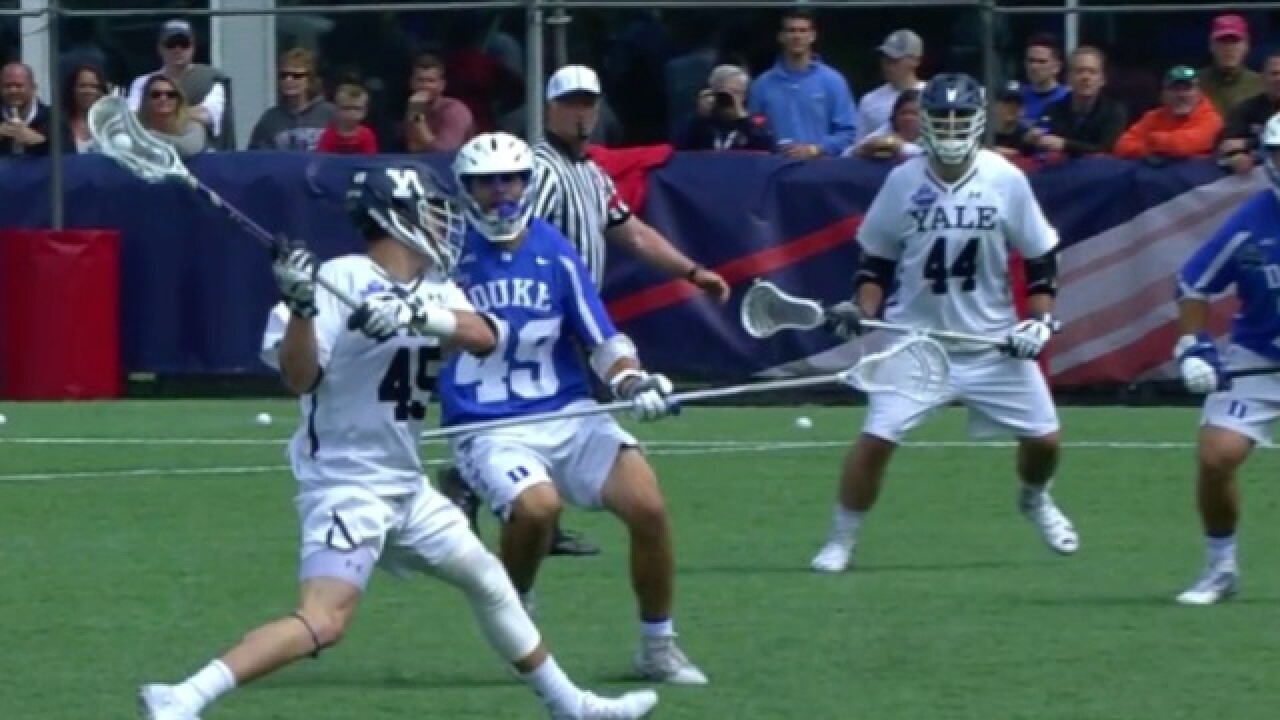 FOXBOROUGH, Mass. (AP) Jack Tigh scored 36 seconds into the game for his first of three goals in the opening half, and Matt Gaudet scored four goals as Yale beat Duke 13-11 on Monday to win its first NCAA lacrosse title.

The third-seeded Bulldogs (17-3) scored the first three goals of the game and struck first in all four quarters while holding off the three-time national champion Blue Devils.

Ben Reeves had a goal and three assists and Jack Starr made nine saves for Yale, which led 10-5 midway through the third period and never let Duke (16-4) get closer than two.

The Bulldogs, who reached the final by routing top-seeded Albany 20-11 on Saturday, are the first Ivy League school to win the title since Princeton in 2001.

Justin Guterding and Joey Manown had two goals and an assist each for Duke, which fell to 3-3 in the championship game.

Manown’s goal with 5:59 left in the third period was the first of three straight goals for Duke that brought the Blue Devils from down 10-5 to 10-8 in less than three minutes.

Yale was back up 12-9 after three quarters and Gaudet scored again with 8:11 left in the fourth, giving Yale enough cushion to hold off Duke’s attempts to rally.

Danny Fowler had six saves for the Blue Devils. Joe Robertson, Peter Conley and Kevin Quigley scored two goals apiece for Duke, which was in the title game for the first time since clinching back-to-back championships with an 11-9 win over Notre Dame in 2014.

Tigh scored the first two goals of the game and picked up his third before halftime, giving Yale a 6-4 lead entering the second half.

Reeves scored his first of the game with 13:33 left in the third and added an assist on Matt Tevlin’s goal 1:35 later to put the Bulldogs up 8-4. Yale needed less than two minutes to go up 9-4 when Gaudet scored from the left side of the net off a pass from Reeves while Duke was a man down because of a slashing call on Reilly Walsh.

The Blue Devils won the faceoff and Guterding scored 10 seconds, but Gaudet struck again for Yale for his 40th goal of the season, putting the Bulldogs up 10-5.

Duke climbed back in it with three straight goals. Alessi atoned for a penalty with a goal with 27 seconds left and Yale led 12-9 after three.

Yale won the championship in 1883, long before the NCAA existed.