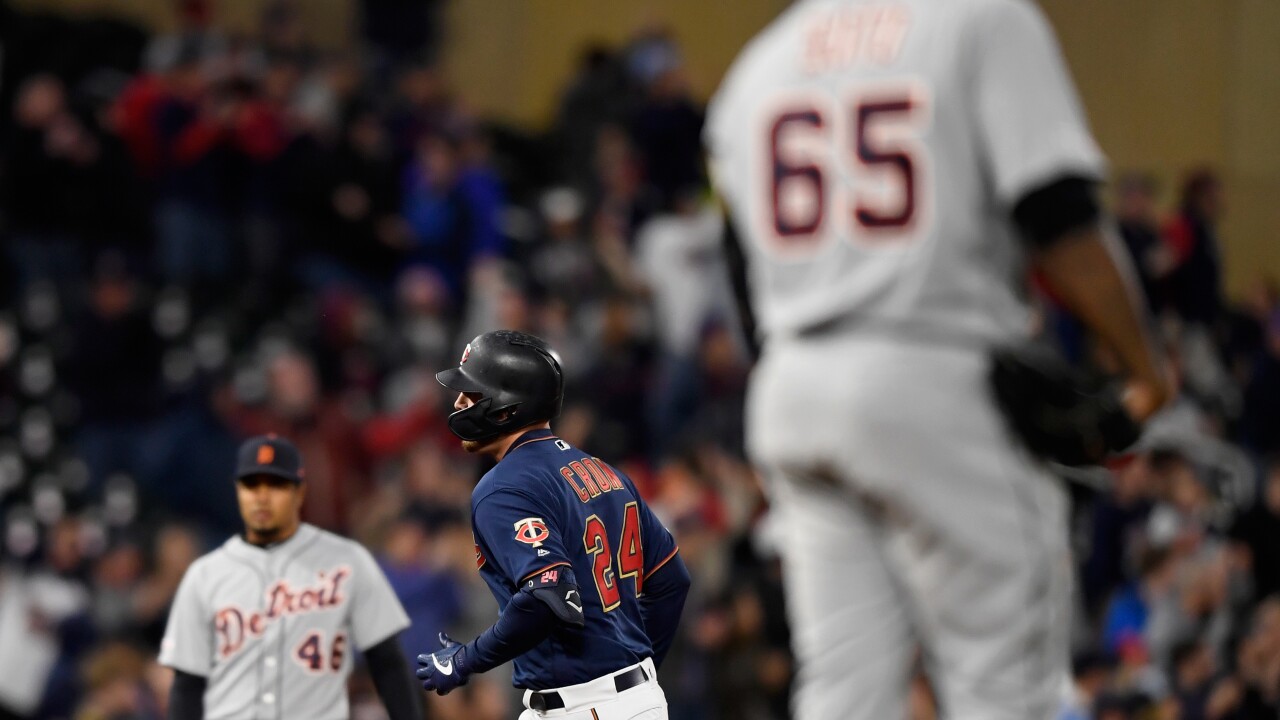 Hannah Foslien/Getty Images
MINNEAPOLIS, MN - MAY 11: Jeimer Candelario #46 and Gregory Soto #65 of the Detroit Tigers look on as C.J. Cron #24 of the Minnesota Twins rounds the bases after hitting a three-run home run during the fifth inning of game two of a doubleheader on May 11, 2019 at Target Field in Minneapolis, Minnesota. The Twins defeated the Tigers 8-3. (Photo by Hannah Foslien/Getty Images)

MINNEAPOLIS (AP) -- C.J. Cron broke open the game with a three-run homer, and the Minnesota Twins beat the Detroit Tigers 8-3 on Saturday night to earn a split of a doubleheader.

Cron's line drive to left field in the fifth inning off rookie Gregory Soto was his second of the day -- he also went deep in the opener -- and it put Minnesota up 7-3, giving Kohl Stewart a cushion. Stewart (1-1) allowed three runs in six innings to earn the third victory of his major league career.

Cron had four hits in the nightcap and went 5-for-8 on the day. Marwin Gonzalez also homered for the Twins, and Eddie Rosario had three hits and drove in a run.

The Twins jumped on Soto (0-1), who made his major league debut after being called up from Double-A Erie as the Tigers' 26th man. Soto was charged with seven runs on nine hits in four innings, departing after Cron's homer.

The doubleheader was scheduled to make up a game that was postponed on April 12 because of blizzard-like conditions. Rain fell briefly during the opener. It was enough to send fans scurrying for cover, but the game was not delayed.

Tigers: Detroit reinstated LHP Blaine Hardy from the 10-day injured list. He had been on the IL since April 22 with a left forearm strain. To make room on the 25-man roster, the Tigers optioned RHP Eduardo Jimenez to Triple-A Toledo.

Twins: Gonzalez, who suffered a facial contusion Friday during a collision with Detroit first baseman Niko Goodrum, sat out the opener.

Tigers: LHP Daniel Norris (1-0, 3.47 ERA) will face the Twins for the second time this year when he starts Sunday's series finale.