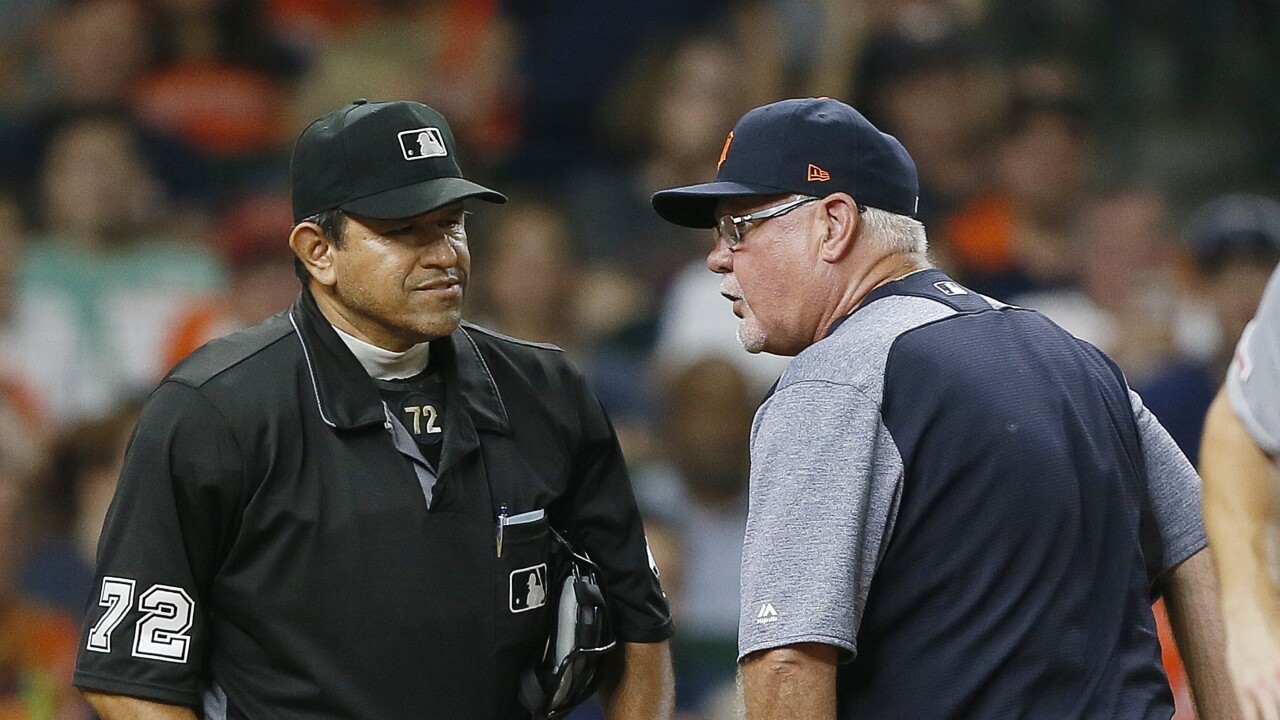 Bob Levey/Getty Images
HOUSTON, TEXAS - AUGUST 19: Manager Ron Gardenhire #15 of the Detroit Tigers is ejected from the game against the Houston Astros in the fifth inning by home plate umpire Alfonso Marquez #72 at Minute Maid Park on August 19, 2019 in Houston, Texas. (Photo by Bob Levey/Getty Images)

HOUSTON -- Yuli Gurriel had two hits and drove in two runs as the Houston Astros built a lead with a big first inning and held on for a 5-4 win over the Detroit Tigers on Monday night.

The Astros jumped on Detroit starter Edwin Jackson (3-6) for four runs in the first inning to go on top 4-1. They led by 3 when Detroit's Ronny Rodriguez hit a solo homer in the sixth before Travis Demeritte added one in the seventh to cut the lead to 5-4.

Detroit had runners at first and third with two outs in the eighth, but Will Harris struck out Demeritte to preserve the lead. Roberto Osuna allowed one hit in a scoreless ninth for his 28th save as the Astros won their second straight after losing five in a row.

Houston starter Wade Miley (12-4) allowed a season-high 10 hits, but just one of them was for extra bases, and three runs in 5 2/3 innings to win his sixth straight decision. He struck out eight without a walk.

Detroit designated hitter Miguel Cabrera had two hits and drove in a run before he was ejected for arguing balls and strikes in the fifth inning. Manager Ron Gardenhire was also ejected in that inning after yelling at home plate umpire Alfonso Marquez about Cabrera's ejection.

Yordan Alvarez and Robinson Chirinos also drove in runs for the Astros on a night shortstop Carlos Correa left after the first inning with back discomfort.

Jackson yielded seven hits and five runs -- four earned -- in six innings for his first loss with the Tigers this season after winning his first two starts.

The Tigers led 1-0 after an RBI single by Cabrera in the first inning.

Michael Brantley walked with one out in the bottom of the inning before a single by Alex Bregman. Alvarez's double scored Brantley to tie it up. There were two outs in the inning when Gurriel doubled to center field on a ball just out of reach of Victor Reyes that scored two more and put Houston on top 3-1.

Robinson Chirinos followed with a single and he reached second and Gurriel scored on an error by left fielder Brandon Dixon on the play.

Demeritte and Cabrera hit consecutive singles with one out in the third inning and Demeritte scored on a sacrifice fly by Dixon which cut the lead to 4-2.

Jackson got on track after his tough first inning and pitched three scoreless innings before the Astros added a run on a sacrifice fly by Chirinos with one out in the fifth. Cabrera and Gardenhire were ejected with Alvarez at the plate with no outs in that inning.

After Cabrera was tossed, Gardenhire stormed out of the dugout screaming at Marquez. Gardenhire got right in his face and went on a profanity-laced rant that continued well after he'd been ejected. He finally made his way off the field as boos rained down from the home crowd.

There were two outs in the sixth inning when Rodriguez homered to center field to get the Tigers within 5-3. Demeritte sent Hector Rondon's third pitch of the seventh inning to center field for a home run to cut the lead to 5-4.

Astros: RHP Gerrit Cole did some work on the field before Monday's game and manager A.J. Hinch is hopeful that he'll make his start on Thursday after being scratched from his start on Tuesday with discomfort in his right hamstring.

Tigers: RHP Spencer Turnbull (3-11, 3.75 ERA) will start for Detroit on Tuesday night. Turnbull allowed six hits and three runs while striking out eight in five innings of a loss against the Mariners in his last start.

Astros: RHP Aaron Sanchez (5-14, 5.79) is scheduled to start for Houston on Tuesday. Sanchez yielded seven hits and six runs in 5 1/3 innings in his last start but did not factor in the decision in a 7-6 loss to Oakland.