Capitals on verge of Cup after blowing out Golden Knights 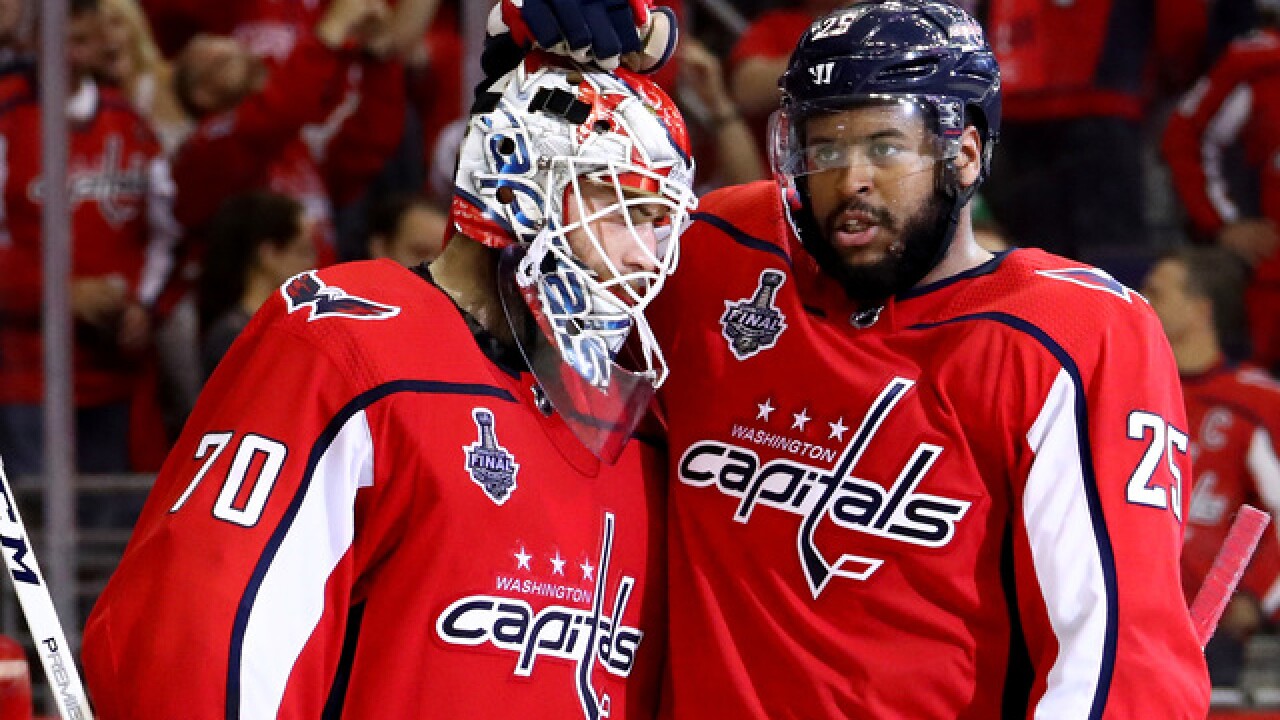 WASHINGTON (AP) -- The Washington Capitals are one win away from the first championship in their 43-year history after routing the Vegas Golden Knights 6-2 on Monday night to take a commanding 3-1 lead in the Stanley Cup Final.

T.J. Oshie, Tom Wilson and Devante Smith-Pelly all scored in the first period to get the Capitals rolling against a determined Vegas team that had no answers early against Braden Holtby, who stopped 28 shots in another strong showing. The desperate Golden Knights outchanced the Capitals by a wide margin but fell apart after James Neal clanked a shot off the post instead of hitting a wide-open net early, and the expansion team's Cinderella run could be over in a matter of days.

Evgeny Kuznetsov dished out four assists and  John Carlson, Michal Kempny and Brett Connolly also scored as thunderous chants of "We want the Cup! We want the Cup!" rang out from the crowd.

Alex Ovechkin and the Capitals will get their first chance to hoist the Cup in Game 5 on Thursday night back in Las Vegas. No team since the Detroit Red Wings in 1942 has blown a 3-1 lead in the Cup Final.

The Capitals seem to be getting enough bounces to make up for nine previous first- or second-round playoff exits in the Ovechkin and Nicklas Backstrom era -- and plenty more disappointments in the previous decades, too.

While Vegas rang several shots off the posts, the Capitals seized just about every opportunity as they have throughout this surprising run. Kuznetsov padded his lead as the playoffs' leading scorer with primary assists on Oshie's power-play goal that made it 1-0 and Wilson's that doubled the lead.

Smith-Pelly, who scored the insurance goal to ice Game 3, kicked the puck from his left skate to his stick and roofed a shot on Marc-Andre Fleury with 20.5 seconds left in the first period. Fleury came into the final as the Conn Smythe front-runner for playoff MVP honors but looked human again by allowing six goals on 23 shots at a defense that has often left him vulnerable.

Kuznetsov leads all playoff scorers with 31 points, Ovechkin is tied for the goal lead with 14 and Holtby showed again Monday his ability to alter the course of a game.

Holtby got some good fortune from the post on shots by Alex Tuch, Neal and Brayden McNabb. But he also made a handful of big saves early when the Golden Knights came out with a furious approach.

By the time Vegas got third-period goals from Neal and Reilly Smith it was too late.