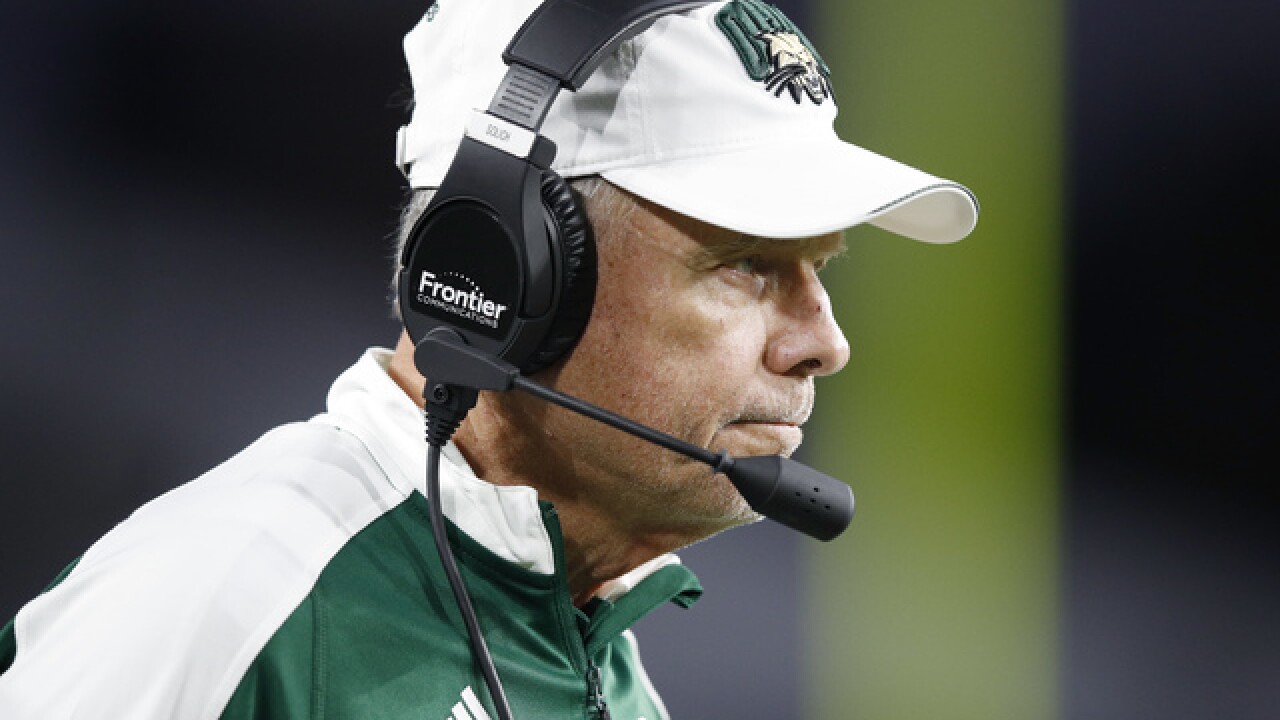 DETROIT (AP) -- Frank Solich is closing in on his 100th victory at Ohio. In a league where coaches come and go, he has built a consistently successful program and stuck with it for a while.

All that's really left for the Bobcats do to is win the title.

Ohio hasn't won a Mid-American Conference championship since 1968, but the Bobcats have played in the title game four times under Solich, most recently in 2016. In a college coaching career that has included six seasons at Nebraska and 13 at Ohio, Solich has only had two losing seasons.

"Been a coach for 50 years, and only been to four different schools -- two of them high schools," he said. "Any time I go to a school, I'm not looking for the next job. I'm just looking at doing my job and trying to do it as well as I possibly can. I enjoy being around young guys, and so I get attached to players. One day seems to lead to the next, and here we are."

Successful MAC coaches can become targets for bigger programs, but Solich -- who came within a victory of a BCS title while at Nebraska -- has remained somewhat under the radar since coming to Ohio. This could be the year the Bobcats have been waiting for. Quarterback Nathan Rourke is back after throwing for 2,203 yards and rushing for 912 last season.

The Bobcats tied a MAC single-season record with 44 touchdowns on the ground. Rourke had 21 of them.

Ohio finished a game behind Akron in the MAC East last year, while Toledo won the West and the league title game . The Rockets are again among the favorites in the West, but Northern Illinois, which went to six straight MAC title games from 2010-15, is eager to return to the top.

Ohio and Northern Illinois were the picks to win the divisions in the MAC's preseason media poll , but seven of the league's 12 teams received at least one first-place vote.

"We have a chance, but so do a lot of other schools," Solich said.

DEFENDING CHAMPS
Toledo finally broke through for its first title since 2004, and the Rockets will be tested in September when they host a nonconference showdown against Miami.
"We have to take that game just like any other one," coach Jason Candle said. "That's a hard thing to do, because that's a game that our guys are looking forward to."
Toledo led at Miami at halftime last year and trailed 38-30 midway through the fourth quarter -- before a couple late touchdowns by the Hurricanes put the game away.  The Rockets must replace quarterback Logan Woodside, who was drafted by the Cincinnati Bengals, and Toledo's big game against Northern Illinois is on the road.

TOP PLAYERS
Offense: Buffalo's Anthony Johnson finished sixth in the nation last season with 1,356 yards receiving. He also set a school record by catching 14 touchdown passes. Last season was his first after transferring from Iowa Western Community College.
Defense: Northern Illinois defensive end Sutton Smith was a second-team All-American last year, finishing with 14 sacks and two touchdowns on fumble returns. Of his 63 tackles on the season, 29 1/2 were for loss.

IN DECLINE?
Bowling Green played in three straight MAC title games from 2013-15, winning two. Since then, the Falcons are just 6-18. Bowling Green gave up 66 points in a loss to Toledo late last season.

ON THE RISE?
Chris Creighton has gone 15-34 in four seasons as Eastern Michigan's coach, but that doesn't tell the whole story. EMU is 12-13 over the past two years, including a bowl appearance two seasons ago. It was the most victories over a two-year stretch for the program since 1988-89.
EMU opens its conference schedule this year against Northern Illinois, Western Michigan and Toledo. After that, the schedule may ease a bit. It would be a stretch to call EMU a title contender, but another season of respectability is certainly attainable.