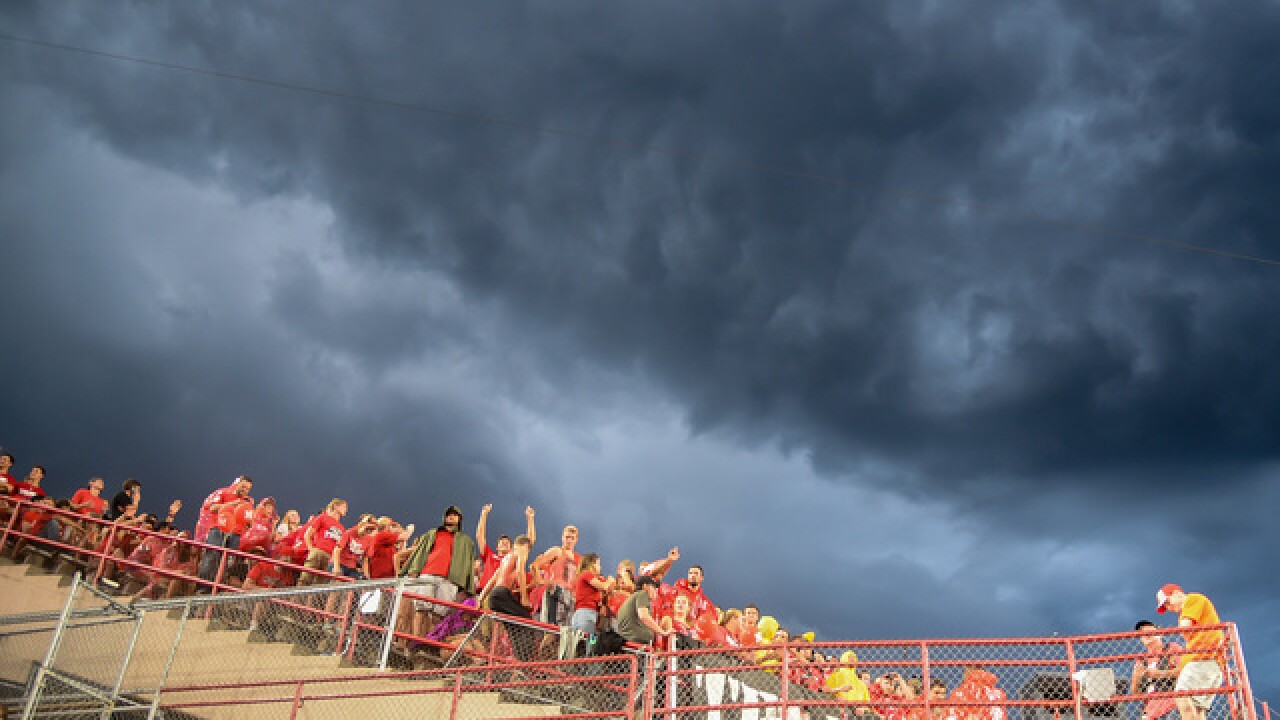 Copyright Getty Images
Steven Branscombe
<p>LINCOLN, NE - SEPTEMBER 01: Fans wait out a weather delay in the game between the Nebraska Cornhuskers and the Akron Zips at Memorial Stadium on September 1, 2018 in Lincoln, Nebraska. (Photo by Steven Branscombe/Getty Images)</p>

(AP) -- With bowl eligibility potentially at stake for both schools later in the season, officials at Nebraska and Iowa State said Sunday they'll work to find opponents to fill out their schedules after their openers were canceled because of severe weather.

Nebraska and Iowa State were among several teams across the nation that contended with weather problems Saturday on the first full weekend of college football. The Akron-Nebraska and South Dakota State-Iowa State games were called off shortly after they started, and other games had lengthy delays.

A team needs to win six games to assure itself of bowl eligibility. Nebraska went 4-8 last season and hopes to rebound under new coach Scott Frost. Deputy athletic director Bob Burton said Nebraska would begin looking immediately for an opponent, whether it be from the Bowl Subdivision or second-tier Championship Subdivision. The Cornhuskers have an open date Oct. 27.

"I think we're going to consider everything," he said.

Akron athletic director Larry Williams, however, said the Zips and Nebraska are in talks to make up the game Dec. 1 if either team needs the game to become bowl eligible.

Players were pulled off the field at Memorial Stadium immediately after the opening kickoff because of lightning in the Lincoln area. The game was called off after a 2-hour, 40-minute delay.

Athletic director Bill Moos had discussions with Akron about resuming the game Sunday at 10:30 a.m., but the Zips balked.

"During the delay, there were numerous scenarios discussed for contingency plans for playing the game, including a scenario to play the game on Sunday," Moos said in a statement. "Unfortunately, Akron faced some logistical challenges and the decision was made to cancel the game."

Williams said Akron tried to find lodging for the team within "a reasonable distance from Lincoln."

"These accommodations were not available or would have required our team to stay in multiple locations, which is not in the best interests of our team and student-athletes," Williams said.

As for whether Akron would receive its $1.17 million payout from Nebraska, Burton said, "I think that's to be determined."

"When Bill went to meet with Akron about a game on Sunday, he came back and said they did not want to play," Burton said. "Once they decided not to play, they decided to load up, and I imagine the universities will be talking in the future."

Iowa State athletic director Jamie Pollard, who was unavailable for an interview, wrote in a letter to fans Sunday the Cyclones are trying to find an opponent to play either on its October open date or on Dec. 1 if, at that time, it needs another win to achieve bowl eligibility. The Cyclones were 8-5 last season and have high hopes for this year.

Iowa State's game against South Dakota State was canceled shortly after it started because of storms in the Ames area. Pollard wrote there was no serious consideration given to playing the game Sunday because it would have required finding lodging for SDSU late Saturday night, thrown off preparations for the teams' games this week, and the Sunday forecast called for more stormy weather.

South Dakota State is unavailable during Iowa State's Oct. 20 open date and hopes to be participating in the FCS playoffs on Dec. 1, which also is the same date as the Big 12 championship game. ISU officials said South Dakota received its payout of $425,000.

"We began working late last night to identify other opponents we could play during our bye week or during championship week," Pollard wrote, adding that a prospective opponent would have to be available on one of those dates and also be eligible, either by having had a game canceled or having not scheduled a full slate of games.

"Needless to say it will be difficult to find an opponent that meets those requirements and is interested in coming to Ames," Pollard wrote.

If the Cyclones achieve six wins by November, he said, a 12th regular-season game wouldn't be needed.

"As a result, we may keep our bye week as is and simply develop a contingency plan for a game on Dec. 1, should we need a 12th game for bowl eligibility," he wrote.

Burton demurred when asked if it would be possible for Nebraska to play Iowa State, a team it met annually when a member of the Big 12 and its previous iterations. Burton said he hadn't thought about it and declined further comment.

Moos, in his statement, said, "Regarding any potential additions or adjustments to the 2018 football schedule, we will explore and discuss those options in the coming weeks. In the meantime, fans are encouraged to hold onto their tickets from last night's game in the event a game were to be added later in the season."