Donovan Peoples-Jones has Michigan wide receivers back on track 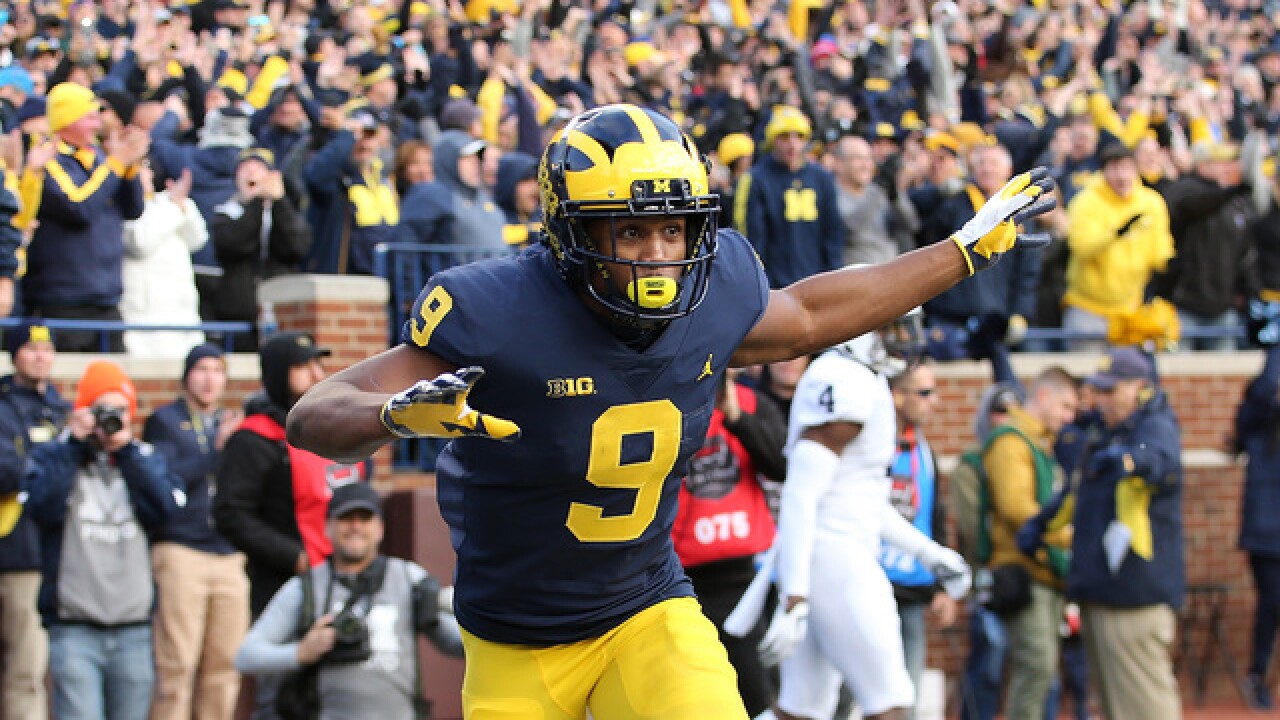 ANN ARBOR, Mich. (AP) -- One season after Michigan's wide receivers could not get in the end zone, coach Jim Harbaugh had just one complaint about the Wolverines' pass catchers on Saturday.

The guy with the black-rimmed glasses and khakis couldn't haul them in.

"I dropped two in the pregame," Harbaugh said Monday. "Which I pride myself in, catching them all. There was two drops by me and none by the receivers, which was outstanding. They continue to be really good about that."

Michigan's receivers battled windy conditions Saturday in a 42-7 win at Rutgers, the ninth straight for the fourth-ranked Wolverines (9-1, 7-0). One reason for the team's sustained run of success has been the production by quarterback Shea Patterson's targets on the outside.

Leading the way again Saturday was sophomore Donovan Peoples-Jones, who is fulfilling the five-star promise he brought to campus last season.

Peoples-Jones arrived last season from Cass Tech, a Detroit powerhouse, catching 22 passes as a freshman for 277 yards and no receiving touchdowns. This season, he's caught seven touchdowns among his 30 grabs for 447 yards.

"Just playing with my teammates has been so much fun this year," Peoples-Jones said. "As a player, you want to be efficient. That's the name of the game. Doing what you got to do."

His touchdown on Sept. 8 against Western Michigan broke a run of 364 days without a TD catch from a Michigan wide receiver. A week later, against SMU, he caught three scores, helping ease the burden for the group and new wide receivers coach Jim McElwain, the former Florida head coach.

"He can jump, run, catch, all those, just the stuff you can't teach," senior wide receiver Grant Perry said, adding that Peoples-Jones has grown this year in "maturity and being a leader as well, helping other guys."

One player who has not caught any touchdowns -- or passes at all -- this season is sophomore Tarik Black, who is still working back from a broken right foot.

Last season, Black lined up opposite Peoples-Jones, and the true freshman looked to be gaining steam early in the year with Black as the team's leading receiver. Then, Black suffered a broken left foot in the third game and didn't return.

This year, the injury to the other foot occurred in the week leading up to the opener at Notre Dame, Michigan's only loss. Black saw his first action this season on Oct. 20 against Michigan State and has played sporadically since then. Harbaugh said he continues to progress.

"Fully engaged with the trainers and him on the things he can do," Harbaugh said. "Some certain types of routes, maybe we're saying that's not as good (if it) just puts more pressure on that outside part of his foot, but he's become more confident with it."

His return could give Patterson another late-season weapon as the team tries to earn a spot in the College Football Playoff. The receiver group also includes sophomore Nico Collins, who has 26 catches and four touchdowns. Tight end Zach Gentry has 28 catches for 392 yards and two touchdowns.

Peoples-Jones also has been showing some bravado, mimicking former Penn State running back Saquon Barkley's touchdown celebration after scoring against the Nittany Lions.

"Just having fun. Being out there with my boys, as a kid that I am," Peoples-Jones said. "Enjoying playing football and enjoying playing for Michigan, and loving everything about this program."