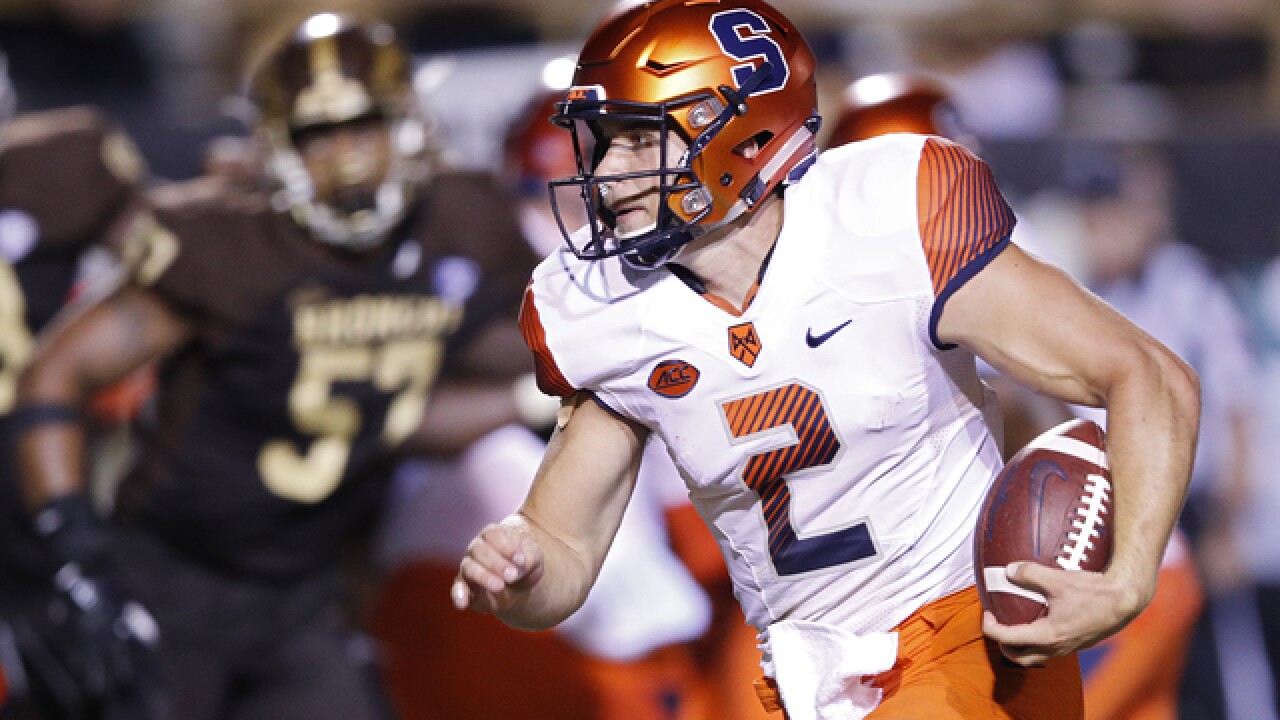 Copyright Getty Images
Joe Robbins
<p>KALAMAZOO, MI - AUGUST 31: Eric Dungey #2 of the Syracuse Orange runs the ball against the Western Michigan Broncos in the third quarter of a game at Waldo Stadium on August 31, 2018 in Kalamazoo, Michigan. (Photo by Joe Robbins/Getty Images)</p>

KALAMAZOO, Mich. (AP) -- Senior quarterback Eric Dungey rushed for 200 yards and passed for 184, coming back off the bench for Syracuse in a 55-42 win at Western Michigan on Friday in the season opener.

Dungey looked like he was going to get the second half off after the Orange built a 34-7 lead, but he returned after Western Michigan made it a six-point game in the third quarter.

Dungey connected with Jamal Custis six times for 168 yards and two touchdowns, all career highs for the senior wide receiver.

Syracuse scored the first 17 points, and converted its first six possessions for points before the Broncos mounted a comeback, scoring 21 unanswered to start the second half until Dungey's return.

Wassink threw two touchdowns to D'Wayne Eskridge, including an 84-yard score to make it 34-21 with 7:32 left in the third quarter. Eskridge caught eight passes for 248 yards.

LeVante Bellamy had a 64-yard run to make it 34-28 before Dungey's return put Syracuse back on track.

THE TAKEAWAY
Syracuse: Dungey proved he's one of the top dual-threat quarterbacks in the country, and the Orange defense was good early. After the quarterback missed the final three games last season -- and the defense gave up 54.0 points per game in that stretch -- the first half gave fans reason to believe after dropping five straight to finish 4-8 last year.
Western Michigan: The Broncos were pummeled early on but rallied. But despite losing their 13th season opener in 14 years, Western Michigan has reached a bowl game in six of those seasons. Western Michigan will have another shot at Syracuse in 2019 at the Carrier Dome.