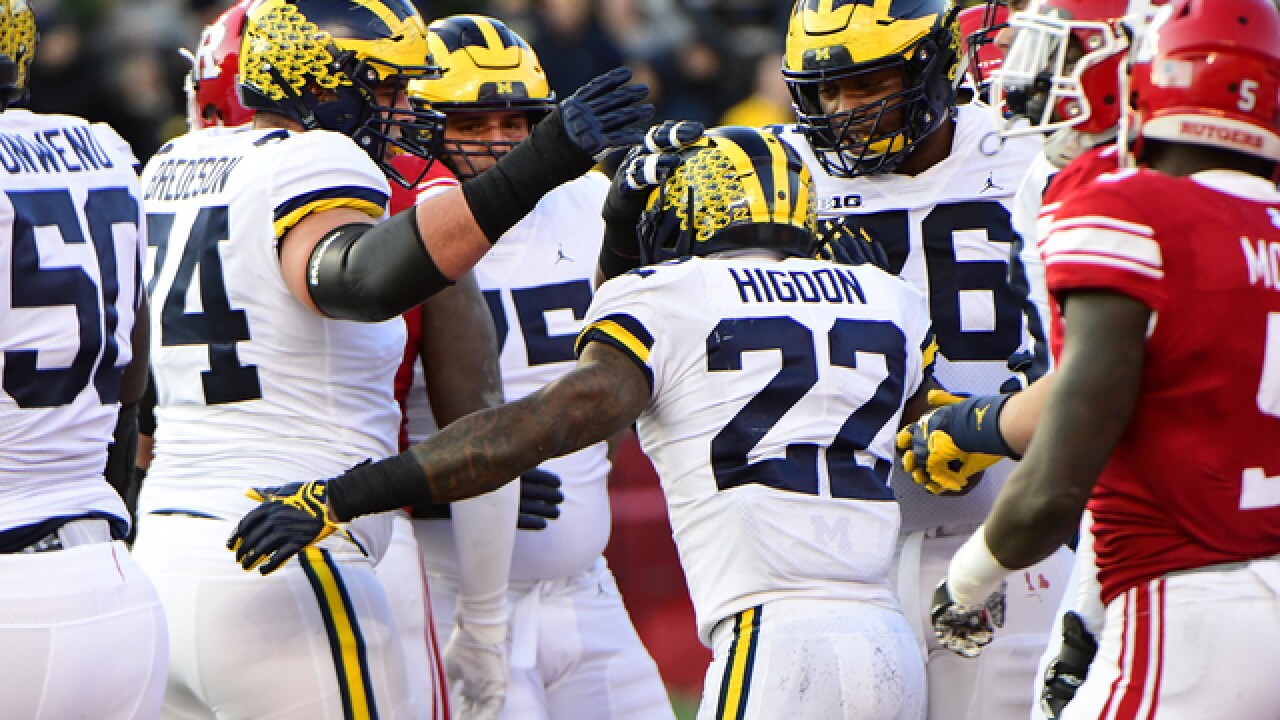 Copyright Getty Images
Corey Perrine
<p>PISCATAWAY, NJ - NOVEMBER 10: Karan Higdon #22 of the Michigan Wolverines is lauded by teammates after a touchdown against the Rutgers Scarlet Knights during the first quarter at HighPoint.com Stadium on November 10, 2018 in Piscataway, New Jersey. (Photo by Corey Perrine/Getty Images)</p>

Patterson threw for 260 yards and three touchdowns, Karan Higdon ran for a pair of 1-yard scores and the fourth-ranked Wolverines routed Rutgers 42-7 on Saturday for their ninth straight win.

Patterson threw darts in swirling winds in front of thousands of fans bundled in Michigan colors. Up ahead, another week with national title hopes in the Big House.

"The one thing I think we do a really good job of is not getting distracted by where we are now," Patterson said, "and don't let that distract us from where we want to be."

The Wolverines (9-1, 7-0, No. 4 CFP) remain in first place in the Big Ten's East Division. They have a final tuneup against Indiana next weekend before closing the regular season at No. 8 Ohio State.

Michigan hasn't lost since the season opener against No. 3 Notre Dame and would have to beat the Buckeyes for just the second time in 15 years to keep any hope at a national title alive.

Patterson kept his focus and Michigan reaped the rewards.

The Wolverines showed no signs of any slipup against lowly Rutgers (1-9, 0-7), holding the Scarlet Knights without a yard passing on the stat sheet until the third quarter. The Wolverines took the field on a chilly night in front of thousands of fans in blue-and-maize winter hats and jackets who turned Rutgers into a Big House East.

Michigan's win was never in doubt -- it was a 38 1/2-point favorite and had outscored Rutgers 162-30 over their last three meetings. Michigan's 78-0 win two years ago in Piscataway was perhaps the most horrifying defeat of Rutgers' 149 seasons.

The only upset Saturday came in the total time it took Michigan to score. The Wolverines didn't take the lead until Higdon's 1-yard run with 45 seconds left in the first quarter.

Rutgers tied it at 7 when Isaih Pacheco took off for an 80-yard TD run, the longest rushing score for a freshman in program history. He finished with 142 yards on 16 carries.

A few thousand Rutgers fans were suddenly pumped, but the threat of a monster upset was quickly wiped out. Higdon gave Michigan a 14-7 lead on a 1-yard run, and Patterson hit Collins for a 36-yard score. Collins was comically open -- the Rutgers students in the end-zone seats were closer to him than any defender -- and it was clear at that point the Wolverines were rolling.

Patterson continued to play like the quarterback the Wolverines have been missing in search of a national title for the Jim Harbaugh era. Patterson, named a finalist this week for the Davey O'Brien award, is on the board at Las Vegas with the third-best odds to win the Heisman Trophy. He didn't necessarily play like the best player in college football against Rutgers, but the Mississippi transfer didn't have to be at his best.

Patterson has thrown a touchdown pass to seven receivers this season and No. 7 was Oliver Martin in the third quarter. Martin's 16-yard haul was his first career touchdown.

Patterson had his fifth three-touchdown game of the season when he found Collins again for a 10-yard score and a 35-7 lead.

"That was a really tough night to throw the ball," Harbaugh said. "It reminded me of my days back in Soldier Field playing in some of those windy conditions. He made some throws that were just unbelievable."

Michigan waved its oversized "M" flag, and Rutgers fans said goodbye as they flocked toward the exits.

"They're probably playing as good as any team in the country," Rutgers coach Chris Ash said.

Patterson again got a boost in the backfield from Higdon, who ran for 42 yards and became the first Michigan running back to top 1,000 yards rushing since Denard Robinson in 2012.

Chris Evans had a 61-yard touchdown run in the fourth for a 42-7 lead.

"It's unfortunate we gave up the long run at the end," Ash said.

THE TAKEAWAY
Michigan: The Wolverines are the only undefeated Big Ten team in conference play and are looking for their first conference title since 2004. Their first national championship since 1997 certainly remains within reach.
Rutgers: Artur Sitkowski had a 16-yard pass completion in the third quarter to give Rutgers 16 yards passing. That's how bad the Scarlet Knights were in their toughest test to date. The only number more impossible to believe than the 0 in the yards passing column at halftime was the announced crowd of 43,786 in the stands.

CALLING FOR BACKUP
With the game out of hand, Michigan gave backup quarterback Joe Milton some snaps.

WHO ARE YOU?
Harbaugh might need a scorecard the next time he refers to Ash.
"Rob does a really good job with them," Harbaugh said.

UP NEXT
Michigan: Head home to play the plucky Hoosiers.
Rutgers: The Scarlet Knights host No. 21 Penn State.