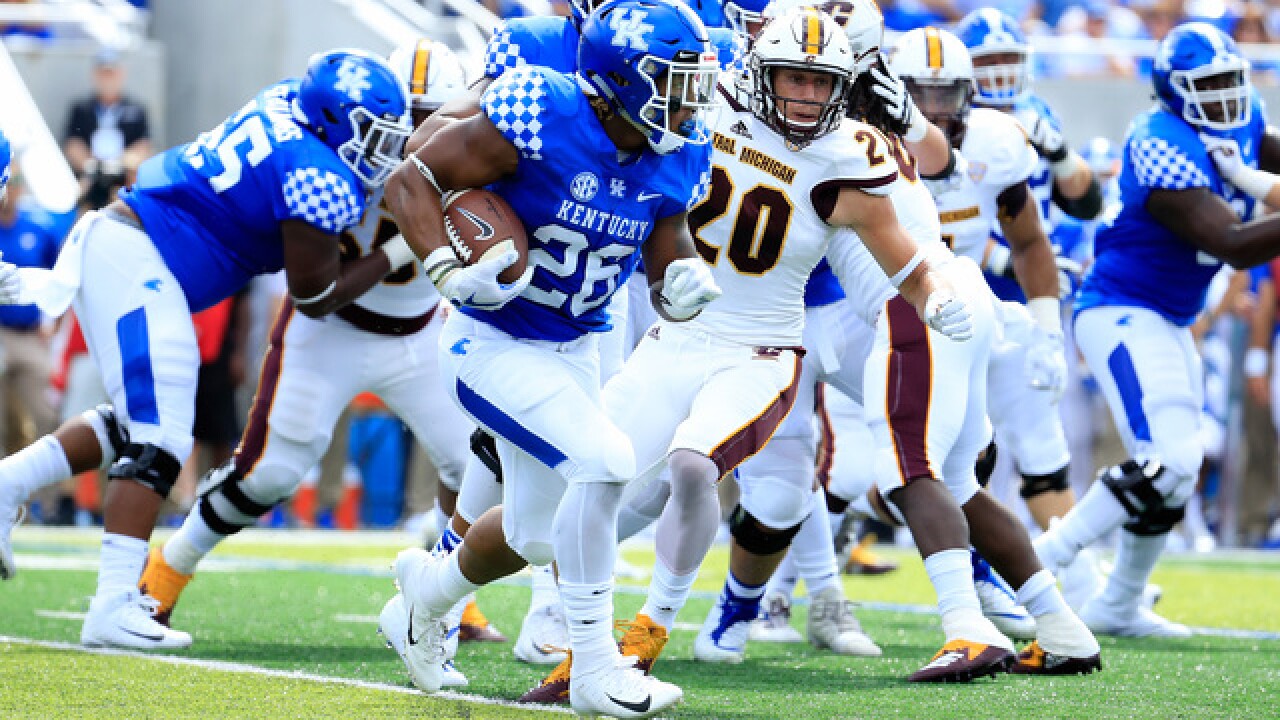 For a while the upset-minded Chippewas seemed poised to make the Wildcats their third Power Five victim in as many seasons by scoring all their points off takeaways and building a 17-7, second quarter lead. Kentucky rallied with two TDs over the final four minutes of the half, including Hoak's 24-yard scoring pass to David Bouvier for a 21-20 edge with 14 seconds remaining.

Kentucky shut out CMU from there, limiting the Chippewas to 97 second-half yards while outgaining them 427-255 overall to improve to 7-0 in the series.

"Says a lot about our team to come back and win by 15," Kentucky coach Mark Stoops said.

Rose rushed for TDs of 55 and 4 yards on the way to 125 yards on 20 carries and his first career 100-yard game. Snell had TD runs of 52 and 11 yards to finish 104 yards rushing on eight attempts. Hoak completed 4 of 9 passes for 50 yards while temporarily relieving injured starter Terry Wilson (11 of 18 passing for 78 yards, two interceptions).

THE TAKEAWAY
Central Michigan: The Chippewas did everything necessary to position themselves for the upset by converting four turnovers into 20 points. Trouble was, that effort came before halftime and their reworked defense couldn't stop Kentucky when it had to. Sophomore Tony Poljan completed 17 of 27 passes for 137 yards and Kumehnnu Gwilly rushed for a 4-yard TD.
Kentucky: The Wildcats' flat offensive start resulted in costly first-half turnovers that almost handed another Power Five upset to Central Michigan. Wilson was hurt while throwing his second interception, and his brief absence opened the door for Hoak to lead the go-ahead TD drive. Wilson returned to lead another TD drive that extended the lead, but Hoak's pinch-hit effort illustrated why the QB competition was so close.
"What a moment for him to come in there when we're losing in the first half," Stoops said of Hoak. "I think there was 55 seconds (left) and we come down and score a touchdown. Says a lot about Gunnar and his character and his ability, and I was really proud for him."

UP NEXT
Central Michigan hosts Big 12 representative Kansas on Sept. 8, seeking its second consecutive series victory and third over a Power Five school in as many years.
Kentucky opens Southeastern Conference play on Sept. 8 at rebuilding Florida in search of its first series victory over the Gators since 1986.