Michigan State hurt by miscues in loss to Ohio State 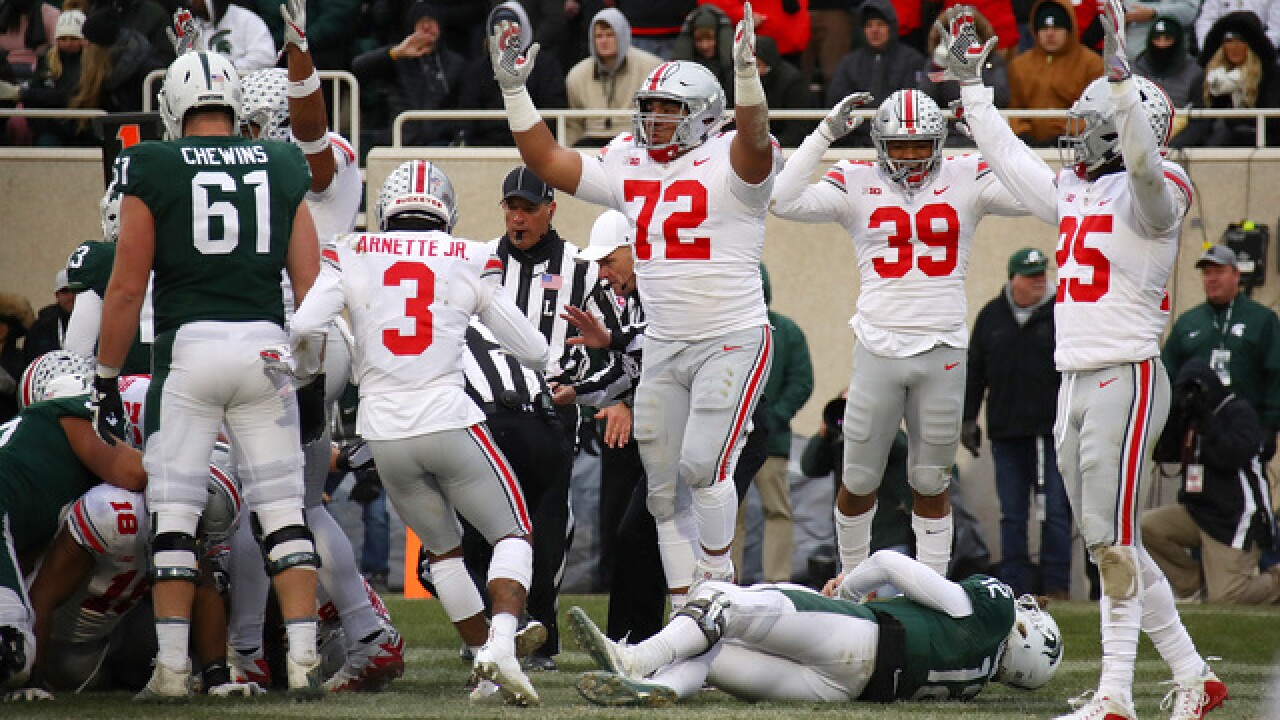 EAST LANSING, Mich. (AP) -- Drue Chrisman kept Michigan State pinned back with a sensational second half of punting, and eighth-ranked Ohio State eventually pulled away for a 26-6 victory over the 24th-ranked Spartans on Saturday.

On the fourth of those possessions, the Spartans had to punt from their own end zone. They took a safety that appeared intentional, giving Ohio State a 9-6 lead, but that did little to help flip the field position. The ensuing free kick went out of bounds, giving the Buckeyes the ball at the 50, and then Chrisman pinned Michigan State back again.

Ohio State capitalized on that punt when a shotgun snap by Michigan State hit the man in motion. Dre'Mont Jones recovered the fumble for the Buckeyes in the end zone, giving Ohio State a 16-6 advantage.

"We just kept playing the field-position game," Buckeyes coach Urban Meyer said. "We always talk about the offense's job in a game like this -- get two first downs, get the ball to midfield and let's get the ball down inside the 10-yard line."

Both offenses found the going tough. Michigan State was 2 for 16 on third down. The Spartans used both Brian Lewerke and Rocky Lombardi at quarterback but never reached the end zone.

"It's not easy to call plays off the goal line," Michigan State coach Mark Dantonio said.

Chrisman's day actually started in embarrassing fashion when his first punt went for only 4 yards, but Michigan State couldn't take advantage. Ohio State opened the scoring late in the second quarter on a 1-yard pass from Dwayne Haskins to Parris Campbell. It was 7-3 at halftime.

The Spartans had a third-quarter touchdown called back for a penalty. They settled for a field goal on that drive to make it 7-6, but that was as close as they got.

THE TAKEAWAY
Ohio State: This was likely the Buckeyes' toughest remaining challenge before a late-November showdown with Michigan. Ohio State remains very much in contention for the Big Ten title after shutting down Michigan State's offense and winning the special teams battle. The Buckeyes have won seven straight road games in this series.
Michigan State: Lombardi appeared to give the Spartans a spark late in the first half, but Michigan State's offense couldn't sustain any momentum, thanks in part to all the bad field position. The Spartans' top-ranked run defense looked the part, but they weren't able to move the ball well enough.

POLL IMPLICATIONS
Michigan State will likely drop out of the Top 25, while Ohio State will hope a solid win on the road will impress the voters and the playoff committee.

UP NEXT
Ohio State: The Buckeyes face Maryland next Saturday in their final road game of the season.
Michigan State: The Spartans also play their last road game, at Nebraska.