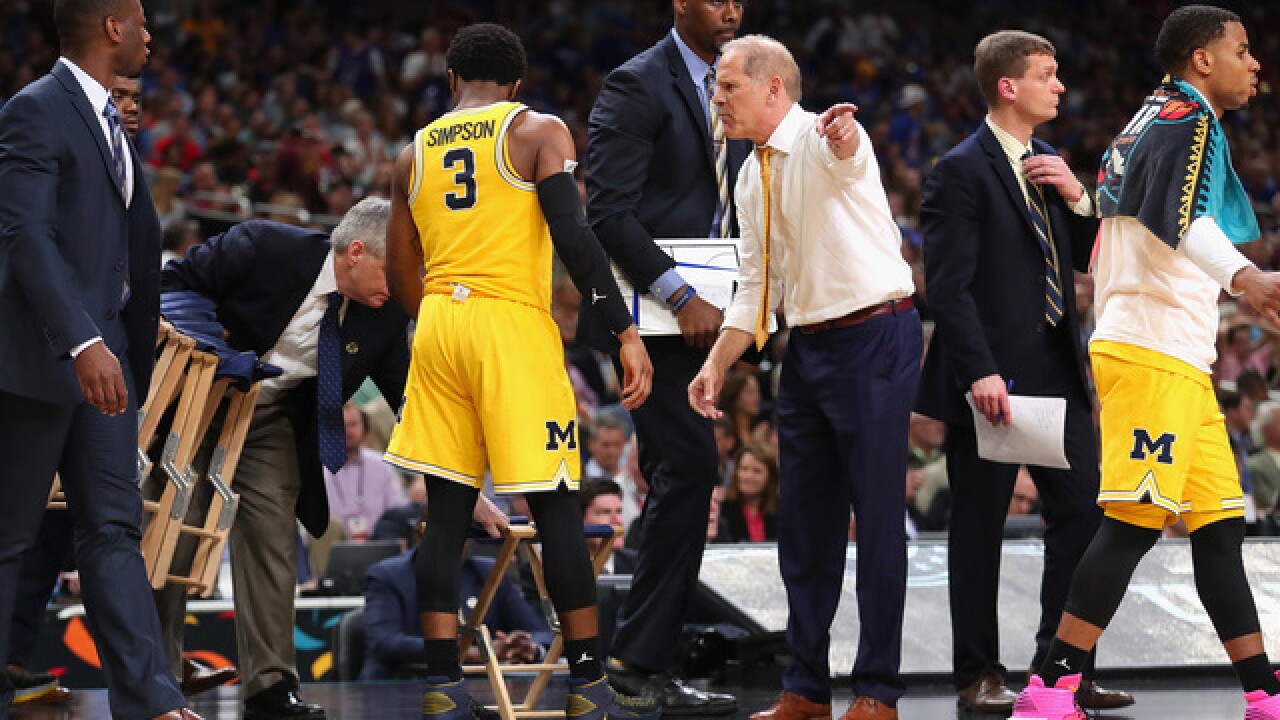 Copyright Getty Images
Tom Pennington
<p>SAN ANTONIO, TX - MARCH 31: Head coach John Beilein of the Michigan Wolverines speaks to Zavier Simpson #3 in the second half against the Loyola Ramblers during the 2018 NCAA Men's Final Four Semifinal at the Alamodome on March 31, 2018 in San Antonio, Texas. (Photo by Tom Pennington/Getty Images)</p>

SAN ANTONIO (AP) -- Facing a team that shoots as well as Villanova, limiting the takes from 3-point range is about as important as limiting the makes.

It just so happens that Michigan is among the best teams in the country at defending 3-point offense. If the Wolverines can pull an upset on Monday night and beat the Wildcats in the NCAA Tournament championship game, the biggest reason is likely to be their ability to force Villanova inside the 3-point line.

Villanova is coming off a record-setting performance in the Final Four victory against Kansas with 18 3-pointers, prompting fans to compare the Wildcats to the NBA's Golden State Warriors. Villanova is third in the country in 3-pointers made per game at 11.6.

According to KenPom.com's advanced stats, Villanova is the most efficient offensive team in the country, and the Wildcats generate 40 percent of that offense from 3-pointers, which ranks 15th in the country.

"They can all shoot," Michigan center Moe Wagner said. "Usually when you play a good team, there's usually something you can give up and make a defensive game plan. But that's not the case here. You know what? It's not supposed to be easy."

Facing Michigan's defense has not been easy, either. After last season, coach John Beilein hired Luke Yaklich, a longtime high school coach in Illinois who was working as an assistant at Illinois State, to be Michigan's defensive coordinator.

The results have been stellar. The Wolverines have the third-best defense in the country by KenPom's ratings and pargicularly focus on stopping the 3-point shot.

Michigan is 10th-best in the country in percentage of points allowed via the 3, according to KenPom. During the 14-game winning streak the Wolverines will take into the championship game, Michigan's opponents are shooting 27 percent from 3-point range.

Maybe even more important, Michigan has held its opponent under their season average for 3-point attempts 12 times during the 14 games.

Loyola-Chicago attempted only 10 3s in the semifinals, eight below its average. Florida State and Texas A&M were both held five attempts below their season averages in losing to Michigan in the NCAA Tournament. Houston took four fewer 3-pointers than it usually does in the second round against the Wolverines.

"You can't stop everything unless you have eight or nine guys and size across the board and unique skill sets on defense," Yaklich said Sunday. "You just try to maximize the strengths of your individual parts on defense. The way we play is to make people take the tough contested 2s."

When the opposing teams do get 3-pointers off, there needs to be a hand in the face -- obviously. But it's easier said than done, especially against teams that move the ball the quickly and have shooters all over the floor. No team plays the spacing game better than Villanova.

"It's just being able to contest without fouling," Yaklich said. "It's an imperfect game. You can't hope people miss. You have to make them miss. You make people miss because you contest. Our contest rate is the backbone of how we play defense."

Yaklich said Loyola was a good tuneup for preparing for Villanova. During the regular season, Big Ten rival Purdue probably presented the most similar challenges as Villanova for Michigan.

The Boilermakers beat Michigan twice in January, going 23 for 41 from 3-point range. The second loss, a 92-88 setback on the road, led to an especially tough film session with Yaklich and the players.

"It taught us all that we have to be more cognizant of the things we can control and not to take shortcuts on the little details, like how you get through screens and those type of things," Yaklich said.

The Wolverines apparently learned their lessons. Michigan played Purdue again in the Big Ten Tournament championship game and the Boilermakers went 4 for 17 from behind the arc.

To earn the biggest prize of all, Michigan's defense will have to conquer the toughest challenge yet.