No. 11 Spartans have room for improvement after dicey opener 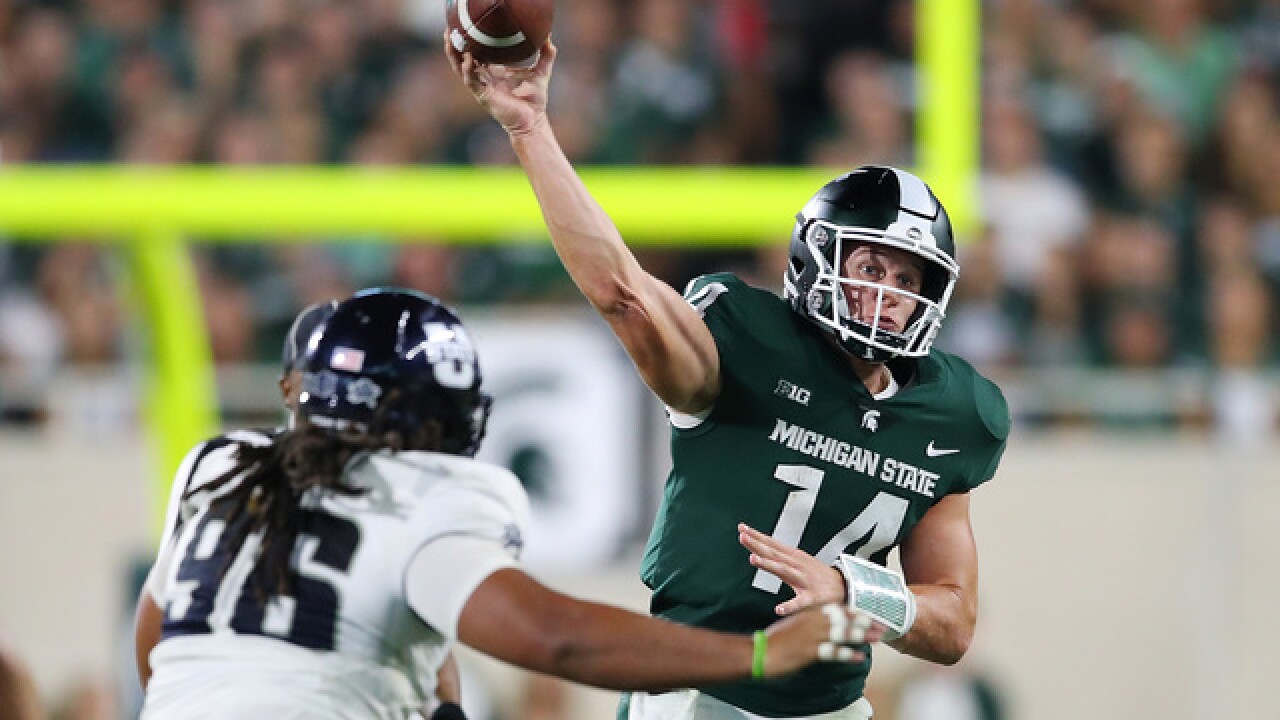 (AP) -- It was a little early for Michigan State to be playing a nail-biter.

The 11th-ranked Spartans held off Utah State 38-31 on Friday night, but it was a dicey start for a Michigan State team that now has to go on the road for its next two games. The Spartans came through under pressure at the end, driving for the winning touchdown after falling behind in the fourth quarter -- but there were certainly some warning signs in the closely contested opener.

Michigan State led by 10 points in the third quarter and had the ball when Brian Lewerke's pass was intercepted and returned for a touchdown. That made it 27-24, and for the rest of the game, the Spartans were scrambling to avoid a huge upset.

Utah State actually took a 31-30 lead with 5:05 remaining, but Michigan State answered with a 75-yard drive that ended with Connor Heyward's 13-yard scoring run -- and a successful 2-point conversion.

The Spartans rolled up 452 yards of offense and controlled the ball for 37:44. It was a solid performance offensively, with Lewerke's interception the only turnover. However, Michigan State had to settle for a couple short field goals, and nearly paid for it.

The Spartans had first-and-goal from the 2 in the first quarter, but a penalty and a sack helped Utah State keep Michigan State out of the end zone.

It was first-and-goal from the 3 early in the fourth, but the Spartans committed another offensive penalty and settled for three points. That made the score 30-24, and the Aggies responded with a 15-play touchdown drive to take the lead.

The Spartans intercepted Jordan Love twice, but he threw for 319 yards, helping the Aggies stay in the game despite only 25 yards rushing.

"They impressed me with how consistent they were being able to dink and dunk it and put together 12-, 15-play drives," Michigan State defensive coordinator Mike Tressel said. "We need to do a better job of turning those into field goals."

"There was definitely fatigue throughout the game a little bit, and you know we prepared as hard as we could. I'm not going to knock us on that at all," linebacker Joe Bachie said. "When a QB plays with tempo it's tough and we've got to adjust. We've got to be better."

If Utah State was supposed to be a season-opening tuneup -- and it turned out to be a lot more interesting than that -- then the next couple games could be even tougher for the Spartans. They play at Arizona State next weekend. That's followed by Michigan State's Big Ten opener at Indiana on Sept. 22. The Spartans do have an open date in between those two contests, but there won't be another home game for a while.

"You always hope your biggest improvement is going to be from game one to game two," Tressel said. "You roll into game one with a high level of confidence, but not really knowing what to expect. I was impressed with Utah State and their consistency offensively. They did a very good job."