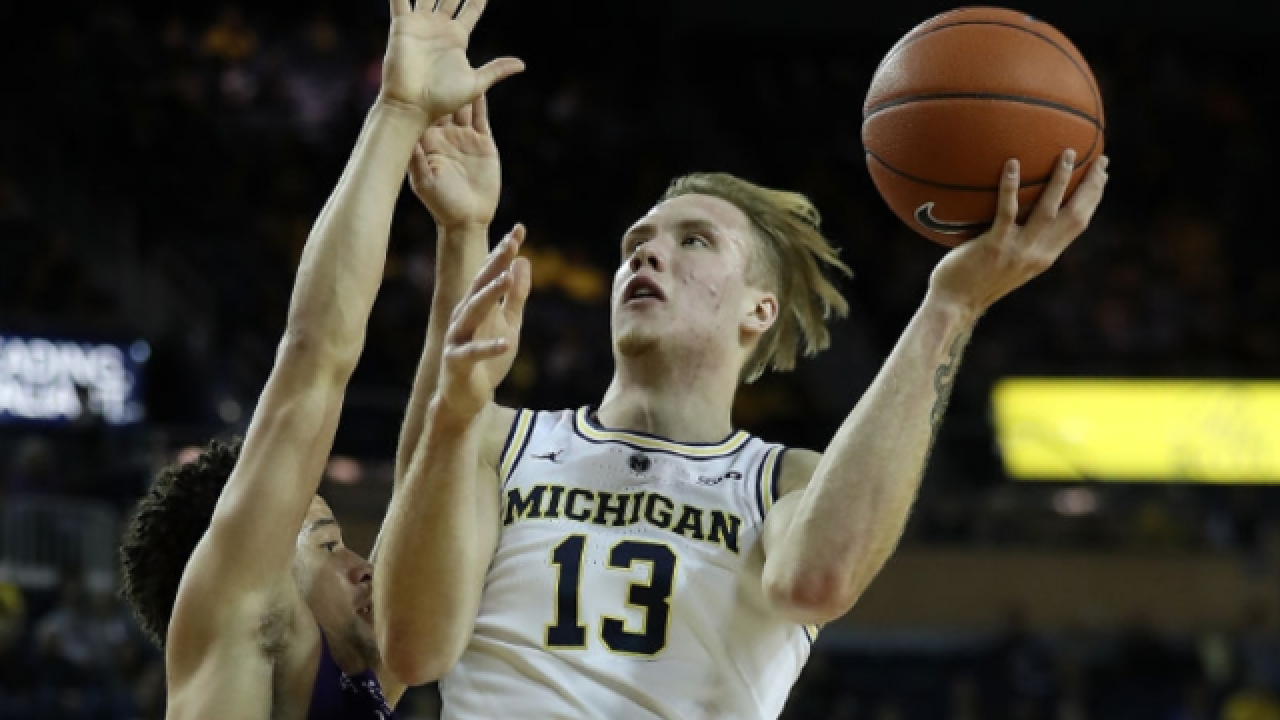 Copyright Getty Images
<p>ANN ARBOR, MI - NOVEMBER 10: Ignas Brazdeikis #13 of the Michigan Wolverines drives the ball to the basket as Caleb Green #0 of the Holy Cross Crusaders defends during the first half of the game at Crisler Center on November 10, 2018 in Ann Arbor, Michigan. Michigan defeated Holy Cross Crusaders 56-37. (Photo by Leon Halip/Getty Images)</p>

Ignas Brazdeikis scored 20 points to lead the 18th-ranked Wolverines to a 66-47 victory over Providence in Sunday's championship game.

Jon Teske added 17 points for Michigan (5-0), which was coming off blow-out wins away from home on Wednesday over No. 8 Villanova (73-46) and on Saturday in this tournament against George Washington (84-61).

The Wolverines made 15 3-pointers against the Colonials, but were just 6 of 18 from behind the arc on Sunday.

They found success down low in a more physical matchup with the Friars. They outscored Providence 32-22 in the paint, with Brazdeikis and Teske converting 14 of their 24 shots.

"It just kind of happened," Teske said. "Our offense runs inside-out or outside-in. We were just trying to play within the game. They found me down low a couple of times. We were just moving the ball and sharing the ball. When we do that, a lot of shots fall."

The game was close until Michigan closed the first half on a 14-2 run and went into intermission up 35-22.  Consecutive 3-pointers from Isaiah Livers pushed the lead to 44-29 early in the second half and the Wolverines pulled away late.

Providence concentrated on taking away Charles Matthews and Jordan Poole, who combined for 47 points in Michigan's semifinal win. The pair had just five and four points respectively on Sunday.

So the Wolverines went elsewhere. Livers finished with eight points and six rebounds.

"We're going to take what people give us," said Michigan coach John Beilein. "Whether it's zone or man, we've seen everything. We're just trying to make the next play. Jordan Poole and Charles Matthews had great nights last night as far as scoring. They had great nights tonight, not in scoring but other areas. Jon didn't score last night. That's the way our great teams have been built."

David Duke had 12 points for Providence (3-2), which was held to just 28 percent shooting by a Michigan defense that has given up an average of 47 points per game.

Providence made just two of 18 shots from 3-point range. Their 22 points down low also was a season low.

"It's not we played the Sisters of the Poor today," said Providence coach Ed Cooley. "We played against an unbelievable, well coached, well balanced team and we'll benefit from this in the long run."