No. 4 Michigan tops Indiana, aims for No. 8 Ohio State 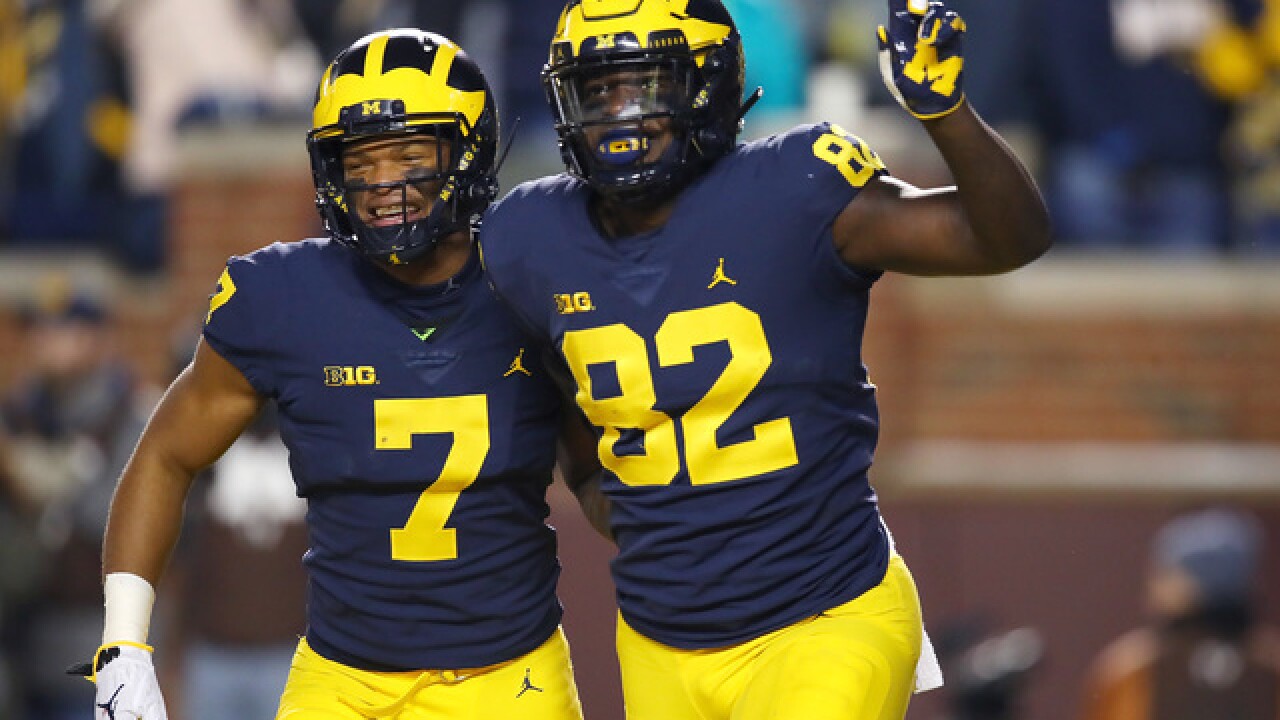 ANN ARBOR, Mich. (AP) -- The Michigan Wolverines looked like they were peeking ahead to playing Ohio State, turning an expected rout into a closely contested game.

The next one would be bigger if Michigan can pull it off.

The Wolverines (10-1, 8-0 Big Ten, No. 4 CFP) close the regular season against the ninth-ranked Buckeyes, needing a win to reach the Big Ten championship game for the first time. If Michigan can win a road game in the series for the first time since 2000, it will be another victory away from likely earning a spot in the College Football Playoff.

"We understand the tradition and the meaning behind it," said quarterback Shea Patterson, who will make his debut in the rivalry on Saturday in the Horseshoe.

The Hoosiers (5-6, 2-6) were competitive against Michigan as they have been lately, losing in overtime twice in the previous three meetings, but came up short again.

"Went toe to toe with them and it was a one-possession game in fourth quarter," coach Tom Allen said. "That's really all you can ask for. You just got to find a way to finish these out."

Indiana led 17-15 at halftime and finished with more yards (385) than anyone has had against Michigan's top-ranked defense this season. The Hoosiers also forced Michigan's offense to stall in the red zone and settle for field goals.

Patterson was 16 of 28 for 250 yards with one touchdown, a 41-yard throw to Nick Eubanks in the second quarter. He threw his first interception in more than a month and had nine carries for 68 yards.

"Their quarterback is a difference-maker," Allen said.

Indiana's Peyton Ramsey was 16 of 35 for 195 yards with a touchdown and an interception. Ramsey also ran for 51 yards. Stevie Scott had 30 carries for 139 yards scored a touchdown -- extending his single-season, school-record total to nine -- and lost a fumble for the Hoosiers. Scott has 1,033 yards rushing, the most by a true freshman at Indiana.

"This performance definitely showed to the nation that we can compete with anybody," Scott said. "We've got the talent here. We just have to finish strong."

THE TAKEAWAY
Indiana: After a strong performance against a team that has been winning big, the Hoosiers should feel better about their chances of beating Purdue to become bowl eligible.
"I'm proud of our team's fight," Allen said.
Michigan: An injury may be a factor against the rival Buckeyes. Michigan defensive end Chase Winovich left the game midway through the third quarter after appearing to hurt his left shoulder. Harbaugh said Winovich's X-rays and CAT scans were negative.
Harbaugh said Berkley Edwards, who primarily plays on special teams, had a concussion. Edwards was put on a backboard and taken off the field on a cart after being hit by Cam Jones, who was ejected for targeting. Harbaugh said Edwards was taken to a hospital as a precaution, adding he was able to talk, respond and move.

READY, KID?
Moody had only handled kickoffs before finding out just before the game he would be replacing Quinn Nordin, who wasn't feeling well. The freshman made all six of his attempts, converting on field goals from 29 to 33 yards.
"It was an incredible experience," Moody said. "The guys out there made it really easy for me with the snaps and the hold."

RED ZONE WOES
Moody had an opportunity to set a school record because Michigan's offense often stalled in the red zone. The Wolverines scored only one touchdown in seven drives that went inside the Indiana 20, settling for six field goals and having the first half end before being able to stop the clock for another snap.

UP NEXT
Indiana: Hosts the rival Boilermakers, needing a win to earn a spot in the postseason.
"We're back to where we were a year ago," said Allen, whose team lost 31-24 at Purdue last year to end the season with five wins.
Michigan: Plays at Ohio State, hoping to win for the second time in 15 meetings.
How quickly did Harbaugh plan to shift his focus to the Buckeyes?
"Pretty quick," he said.