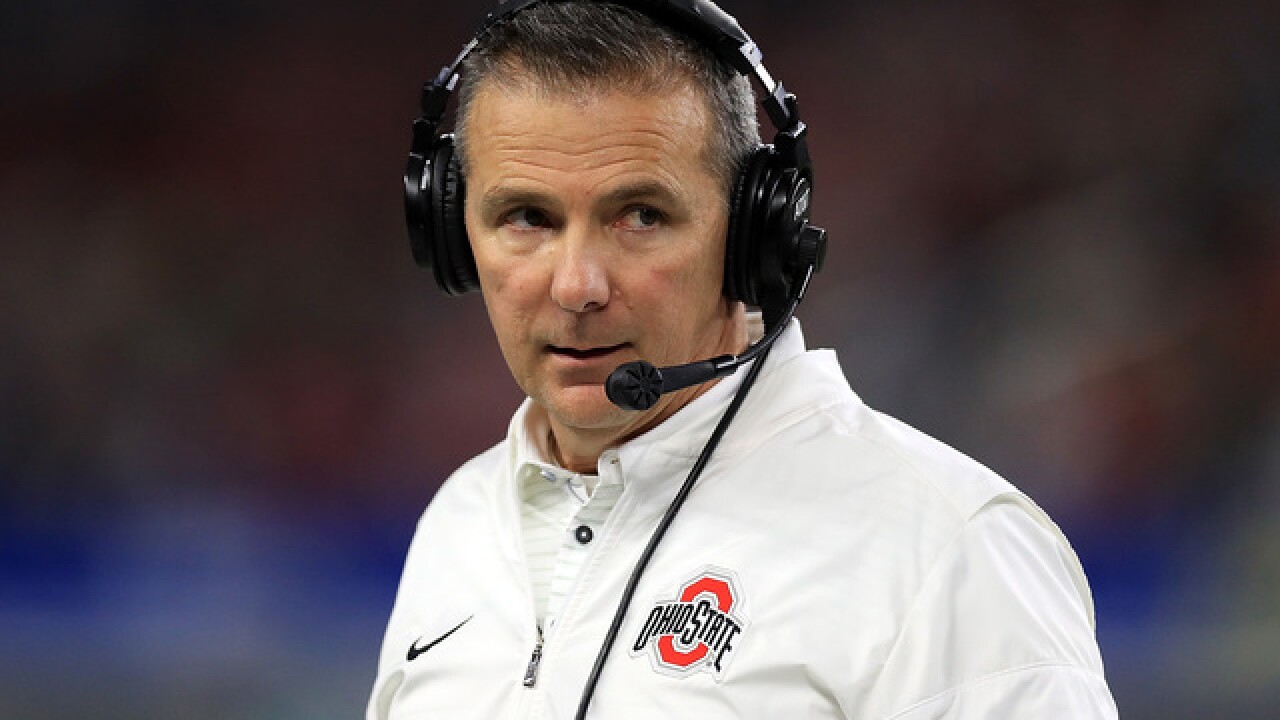 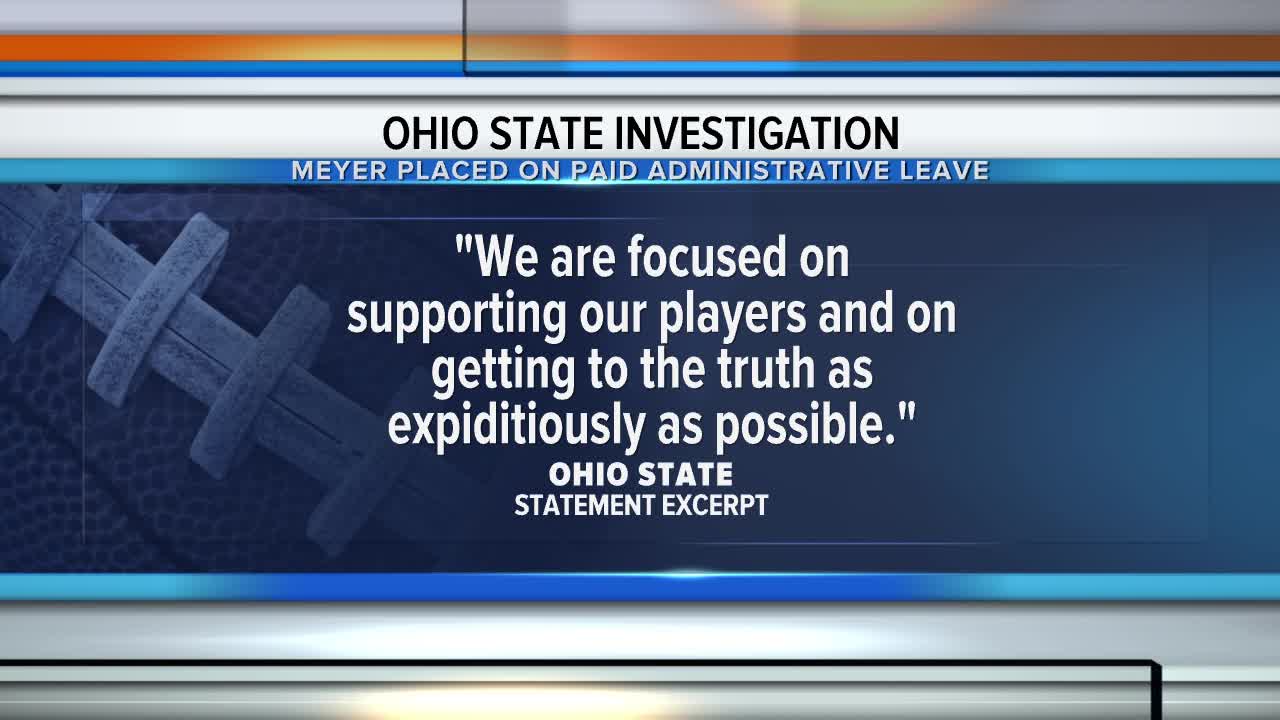 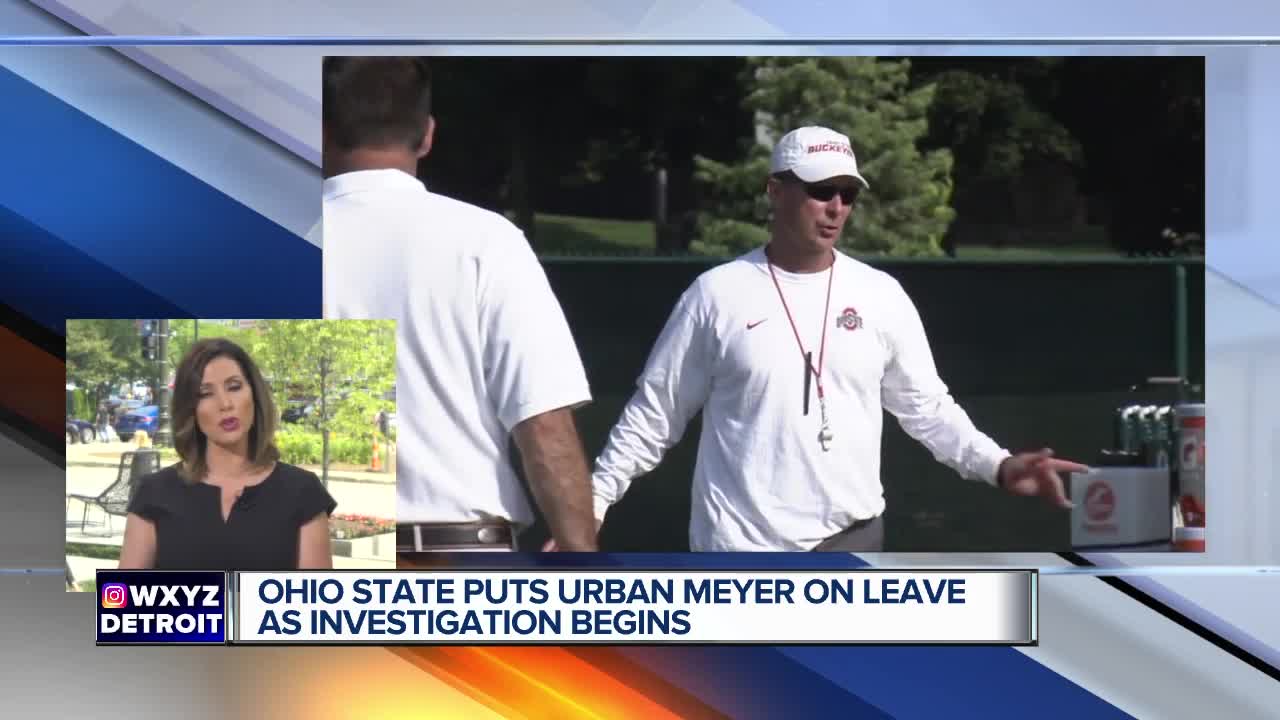 (AP) -- Ohio State placed football coach Urban Meyer on paid administrative leave Wednesday while it investigates claims that his wife knew about allegations of domestic violence against an assistant coach years before he was fired last week.

Courtney Smith gave an interview to Stadium and provided text messages to former ESPN reporter Brett McMurphy between her and Shelley Meyer in 2015 and with the wives of other Buckeyes coaches. Courtney Smith also provided threatening texts she said came from her ex-husband, former Ohio State assistant Zach Smith.

"Shelley said she was going to have to tell Urban," Courtney Smith told Stadium. "I said: `That's fine, you should tell Urban."'

Hours after Courtney Smith's interview was posted online, Ohio State said it was conducting an investigation into the allegations and Meyer was being placed on leave. Offensive coordinator Ryan Day will serve as acting head coach for the Buckeyes, expected to be one of the top teams in the nation again this season. Ohio State's first preseason practice is scheduled for Friday. The season starts Sept. 1 with a game against Oregon State in Columbus, Ohio.

Meyer said in a statement he and athletic director Gene Smith agreed that his being on leave was best for the investigation.

"This allows the team to conduct training camp with minimal distraction. I eagerly look forward to the resolution of this matter." Meyer said.

Meyer is heading into his seventh season at Ohio State, where he is 73-8 with a national title in 2014 and two Big Ten Conference championships. Shelley Meyer is a registered nurse and is employed as an instructor at Ohio State. Both Meyer and his wife could be in violation of Title IX policy on reporting allegations of domestic violence against university employees.

Zach Smith was charged in May with misdemeanor criminal trespass. At the time of the charge, Zach Smith's attorney said Courtney Smith had accused him of driving to her apartment after she told him they would meet elsewhere so he could drop off their son. Zach Smith pleaded not guilty last month. A hearing has been scheduled for Friday.

Zach Smith was also accused of aggravated battery on his then-pregnant wife in 2009 while he was a graduate assistant on Meyer's staff at Florida. The charge was dropped because of insufficient evidence. Urban Meyer brought Smith, the grandson of late Buckeyes coach Earle Bruce, to Ohio State in 2012. Meyer worked for Bruce and considers him a mentor.

Two police reports filed in 2015 in Ohio's Powell County, after the Smiths separated in June of that year, accused Zach Smith of abuse. Charges were never filed.

At Big Ten media days, Meyer said he knew of the incident in 2009 and that he and Shelley Meyer addressed it with the Smiths. He was also asked about the 2015 incident alleged by Courtney Smith.

"I can't say it didn't happen because I wasn't there," he replied. "I was never told about anything and nothing ever came to light. I've never had a conversation about it. I know nothing about it. First I heard about that was last night. No, and I asked some people back at the office to call and say what happened and they came back and said they know nothing about it."

Meyer is one of the most successful coaches in college football history, with three national championships and an .851 winning percentage in 16 seasons at Bowling Green, Utah, Florida and now Ohio State, the team he grew up rooting for in Northeast Ohio.

Meyer won national championships with Florida in 2006 and '08, but his teams also had more than two dozen players get into trouble with the law. He resigned twice at Florida, citing health reasons. First in 2009 season after the Gators lost the Southeastern Conference championship game while trying to repeat as national champs. He changed his mind soon after and coached another season. The Gators went 8-5 and this time he stepped down for good.

Meyer was out of coaching for a season, but was hired by Ohio State in November 2011 to replace coach Jim Tressel, who was fired before that season for lying to the NCAA and university of about rules violation committed by some of his players.

Since returning to coaching, Meyer's program has been one of the most dominant in college football and his players and coaches have mostly stayed out of major trouble.

Meyer did face some criticism in 2013 for allowing running back Carlos Hyde to return to the team after he was charged with striking a woman in a bar. The case was dropped by police when the woman chose not to pursue charges, but Hyde was suspended three games by Ohio State.