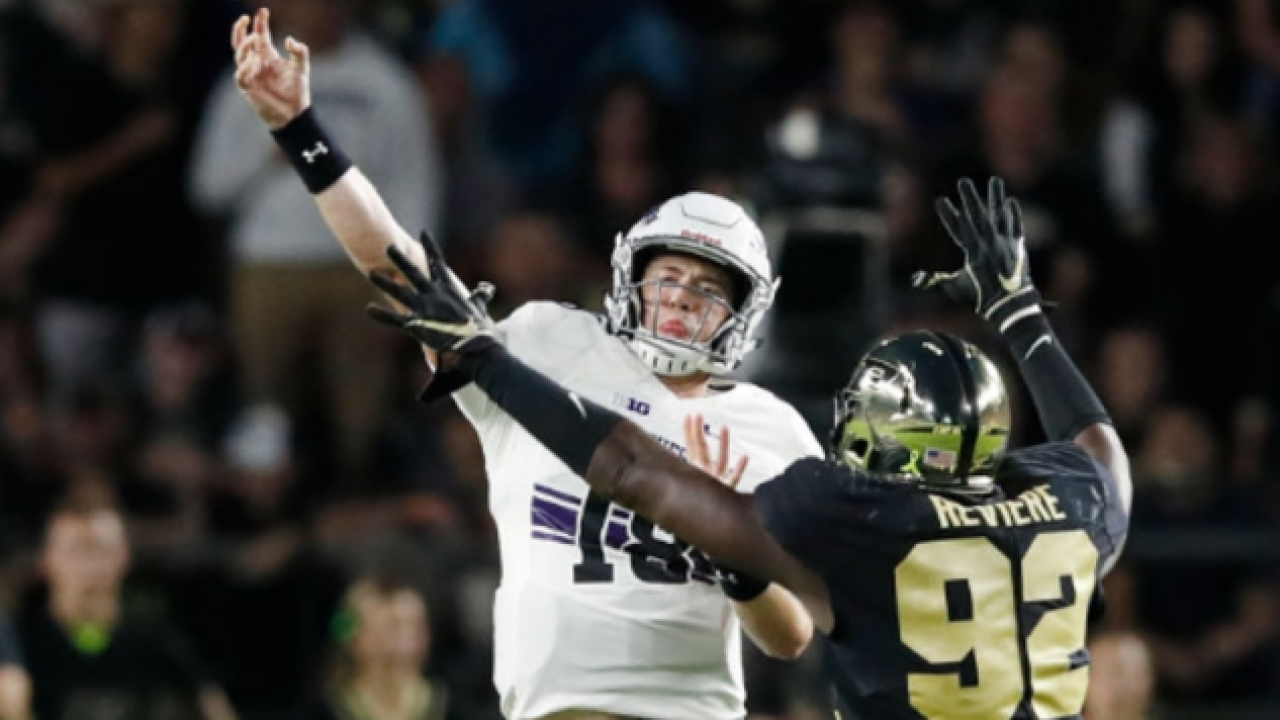 Copyright Getty Images
Joe Robbins
<p>WEST LAFAYETTE, IN - AUGUST 30: Clayton Thorson #18 of the Northwestern Wildcats throws a pass while under pressure from Giovanni Reviere #92 of the Purdue Boilermakers in the fourth quarter of a game at Ross-Ade Stadium on August 30, 2018 in West Lafayette, Indiana. Northwestern won 31-27. (Photo by Joe Robbins/Getty Images)</p>

(AP) -- Purdue coach Jeff Brohm thought his defense looked every bit as bad on tape as it did in person last week.

It gave up 31 points, more than 400 total yards, forced no turnovers and struggled to get off the field. When the Boilermakers did get a crucial third-down stop with 2:31 to go, Lorenzo Neal was called for a personal foul and Northwestern ran out the clock to seal its win.

Brohm didn't like the results or the effort. So this week he issued a challenge.

"We have to get the front seven to play a whole lot better and to play a whole lot harder, to be much more effective and disruptive, play with tremendous energy and toughness," Brohm said. "We have to tackle better in the secondary. We've got to be able to do things on defense, know guys are going to go hard, be able to come off the ball and figure out a way to create penetration."

For the moment, it doesn't sound like lineup changes are imminent. But if the approach doesn't change -- and fast -- Brohm may not have a choice.

On Saturday, the Boilermakers (0-1) welcome Eastern Michigan to Ross-Ade Stadium. Many outsiders expect this to be a tuneup for next week's contest with Missouri, but Brohm knows after seeing the Eagles (1-0) pile up 51 points and 473 total yards while going 7 for 7 on third-down conversions against FCS foe Monmouth last week.

But if the Boilermakers' defense turns in another dud, Brohm knows what the ramifications could be.

"If we don't play well, we're definitely capable of losing to anybody," he said. "We have to concentrate, refocus, come out and play extremely hard, find a way to win."

BIG GOALS
Last year, the Eagles soared past Rutgers on the road for their first win in 59 games against Power Five teams. This week, they're seeking a second straight victory over a Big Ten foe. Brohm's message is short and simple.
"Last year they beat Rutgers at Rutgers. We lost to Rutgers at Rutgers," he said.  "This team is capable of beating anybody."

QB WATCH
Purdue pulled starting quarterback Elijah Sindelar just before halftime last week after his third interception. David Blough stepped in and rallied the Boilermakers in the second half but fell short of a victory. Who starts this week? Brohm is keeping his choice under wraps.
"I'm disappointed, Elijah is disappointed in himself. He's taking it hard. He's going to work hard to improve. Really it's forcing plays. Sometimes he threw the ball well. He does give us a vertical threat, can throw the ball up the field," Brohm said. "I think both quarterbacks are going to play, I can tell you that for sure. Then we'll decide who starts toward the end of the week."

BACK HOME AGAIN
Eastern Michigan coach Chris Creighton has never actually taken one of his teams to West Lafayette. But he's no stranger to Indiana football. Before heading to Eastern Michigan, Creighton spent seven seasons as the head coach of nearby Wabash College, where he went 63-15 and led the Little Giants to a 30-5 mark, three straight conference crowns and two appearances in the Division III playoffs during his final three seasons.

QUICK HITTERS
Brohm has a reputation as an offensive guru. But last week's scores demonstrated just how quickly the Boilermakers are capable of striking. Purdue's three touchdowns came on drives that averaged 4.7 plays and 1 minute, 29 seconds.