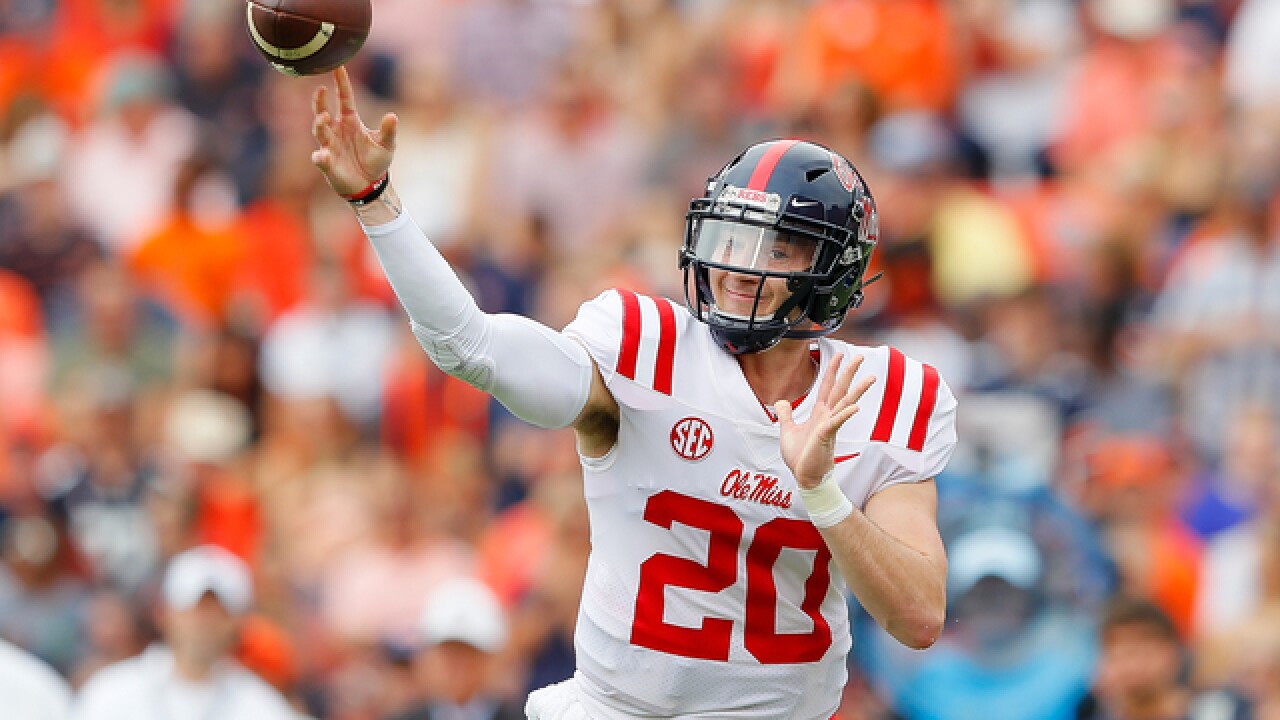 (AP) -- Quarterback Shea Patterson is eligible to play for Michigan this year after the NCAA granted the Mississippi transfer's request to waive the usually required redshirt season at his new school.

Michigan and Ole Miss released a joint statement Friday to announce the decision, which could set the stage for six of Patterson's former Ole Miss teammates to be cleared to play next season, too.

Patterson transferred from Ole Miss after the Rebels were sanctioned by the NCAA last year. The NCAA allowed Mississippi's rising seniors to transfer without having to sit out this season, but Patterson and several other Ole Miss underclassmen decided to leave and request permission to play immediately.

Patterson, who is heading into his junior season and coming off a knee injury, claimed Ole Miss coaches and staffers misled him during the recruiting process about an NCAA investigation that was ongoing at the time. The other transferring Rebels were making similar claims. Ole Miss officials responded, saying they did nothing wrong.

In the statement, the schools said Patterson's original waiver was withdrawn by Michigan. Using a recently approved amendment to the NCAA waiver guidelines, the schools worked with the NCAA to come to an agreement on new waiver.

A former five-star prospect from Toledo, Ohio, Patterson passed for 3,139 yards, 23 touchdowns and 12 interceptions in 10 games at Ole Miss. He practiced with Michigan throughout the spring. The Michigan football team is currently on a trip to Paris.

Arkansas-based attorney Tom Mars was advising Patterson and his family throughout the waiver process and providing information to support the quarterback's claims. Mars represented former Ole Miss coach Houston Nutt in a defamation lawsuit against the school that has been settled.

"There are a lot of people who worked really hard to help make this transfer process a success," Patterson said in a statement. "I want to thank Coach (Jim) Harbaugh, the University of Michigan and the NCAA for allowing me to continue my education and football career at one of the best universities in the country.

"A special thanks to Michigan's Compliance Staff and to Tom Mars for his personal guidance for me and my family during this time. With this decision behind us, my family and I are fully focused on the upcoming season. My teammates and I are always committed to competing at the highest level and winning championships. Go Blue!"

The other transferring former Ole Miss players who Mars has been advising are receivers Tre Nixon (to Central Florida) and Van Jefferson (to Florida), defensive back Deontay Anderson (to Houston), offensive tackle Jack DeFoor (Georgia Tech) and linebacker Jarrion Street (UAB). Jefferson's situation is a different from the others in that he is a class of 2015 recruit, who sat out one season at Ole Miss as a redshirt. The other players are all 2016 recruits, though Anderson did not play for Ole Miss last year.

The schools had been monitoring Patterson's case to determine the best approach for their appeals. With the new guidelines being taken into account, it seems that as long as the players would have been eligible athletically and academically at Ole Miss, are progressing sufficiently toward a degree and Mississippi does not object to the transfer, they should be eligible to play for their new schools this season.

None of the players is positioned to have a greater effect on their new teams next season than Patterson.

Patterson is the most accomplished quarterback on a team that struggled at the position last year, starting three different players. Two of those players -- Wilton Speight and John O'Korn -- are no longer with the team. Brandon Peters, who finished last season as the starter, redshirt freshman Dylan McCaffrey and freshman Joe Milton, an early enrollee, competed with Patterson throughout spring practice.

The Wolverines sputtered to an 8-5 record in 2017, Jim Harbaugh's third season as Michigan coach. Michigan has yet to finish better than third in the Big Ten East with Harbaugh, but the Wolverines return many of last season's key contributors on both sides of the ball and are hoping improved quarterback play can push them to the top of the conference.