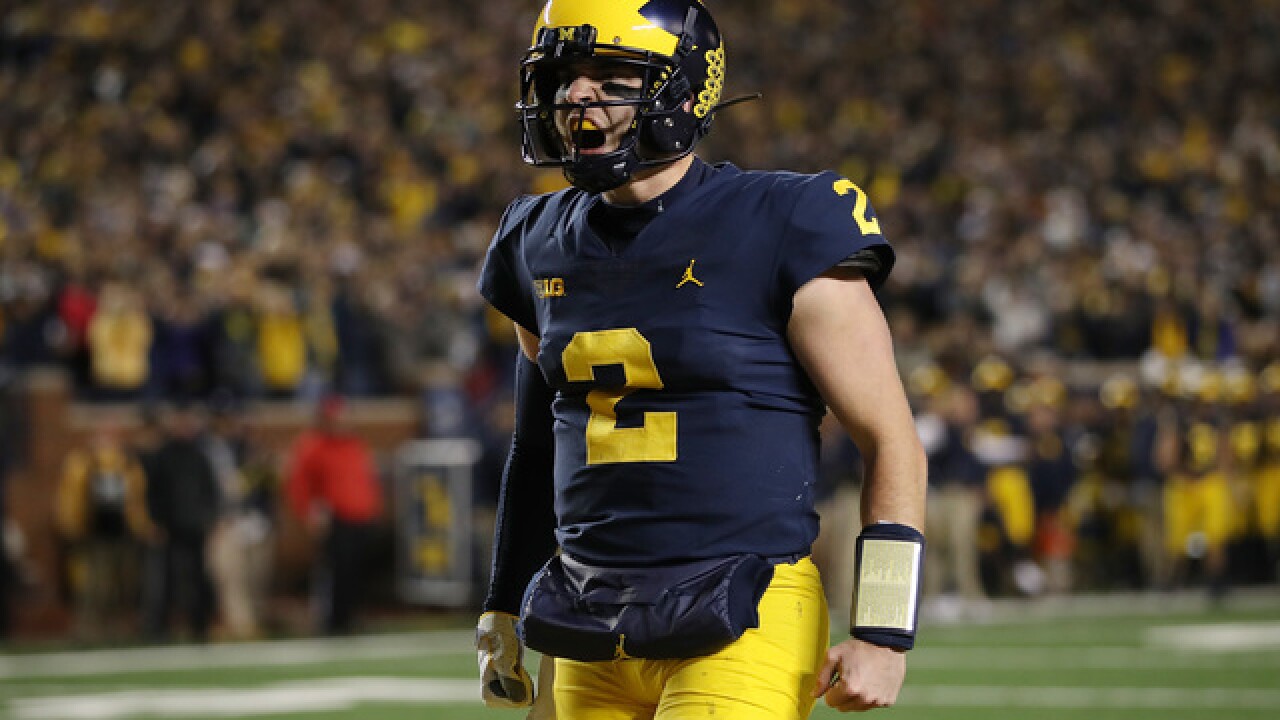 ANN ARBOR, Mich. (AP) -- Shea Patterson accounted for 214 yards of offense and a touchdown, leading No. 12 Michigan to a 38-13 victory over No. 15 Wisconsin on Saturday night.

The Wolverines (6-1, 4-0 Big Ten) beat a ranked conference team for the first time since topping the Badgers two years ago. They have won six straight games since opening this season with a seven-point loss to then-No. 12 Notre Dame.

The Badgers (4-2, 2-1) had won a record 17 straight regular season Big Ten games, and 10 consecutive road games in and out of conference play.

Patterson, who had an 81-yard run, scored on a 7-yard run and connected on a 2-point conversion pass to put Michigan up 21-7 early in the third. The possibly pivotal drive was extended when the Badgers were called for roughing snapper Camaron Cheeseman on a punt.

Alex Hornibrook, had perhaps the worst game of his successful career.

The Wisconsin senior was 7 of 20 for 100 yards with one touchdown pass with 3:47 left. He threw two interceptions, one of which was returned for a score by Lavert Hill that gave Michigan a 31-7 lead with 9:55 left to play.

Hornibrook failed to complete 12 straight passes after connecting on his first three attempts, leading to him completing a career-low 35 percent of his attempts. By the time the drought ended, the Badgers were down by 31 points and there was less than 5 minutes left to play.

Michigan's Karan Higdon ran for 105 yards and a score that broke a scoreless tie early in the second quarter. He took advantage of holes the offensive line was creating after he was limited to 15 yards rushing on his first 10 carries. Backup quarterback Dylan McCaffrey ran for a 44-yard TD to make it 38-7 with 5:16 remaining.

Jonathan Taylor, who entered the game leading the nation with 169.8 yards rushing yards rushing per game, ran for 101 yards 17 carries.

THE TAKEAWAY
Wisconsin: The Badgers will have a hard time beating good teams if Hornibrook can't make them respect the pass. Even if he can't, though, they may still end up representing the West Division in the Big Ten championship game.
Michigan: The Wolverines earned their first impressive win of the season, but they can't celebrate too much or too long with matchups coming up at rival Michigan State and against No. 8 Penn State.

POLL IMPLICATIONS
Michigan may move up a little because four teams ranked higher lost. The Badgers will likely slip toward the back of the poll with the lopsided loss.

KEY STAT
Michigan ranked No. 120, out of 129 teams, entering the game with 52 penalties. It was flagged only once against Wisconsin, getting an unsportsmanlike conduct for celebrating Hill's interception return for a touchdown.

UP NEXT
Wisconsin: Hosts Illinois.
Michigan: Plays at Michigan State, which has won eight of the last 10 games in the rivalry and is coming off a win against the Nittany Lions on the road.
Michigan: Hosts the Badgers for the start of a three-game stretch that may prove to be pivotal.