Day in the life of Jack Hughes: WXYZ goes behind the scenes with the hockey phenom 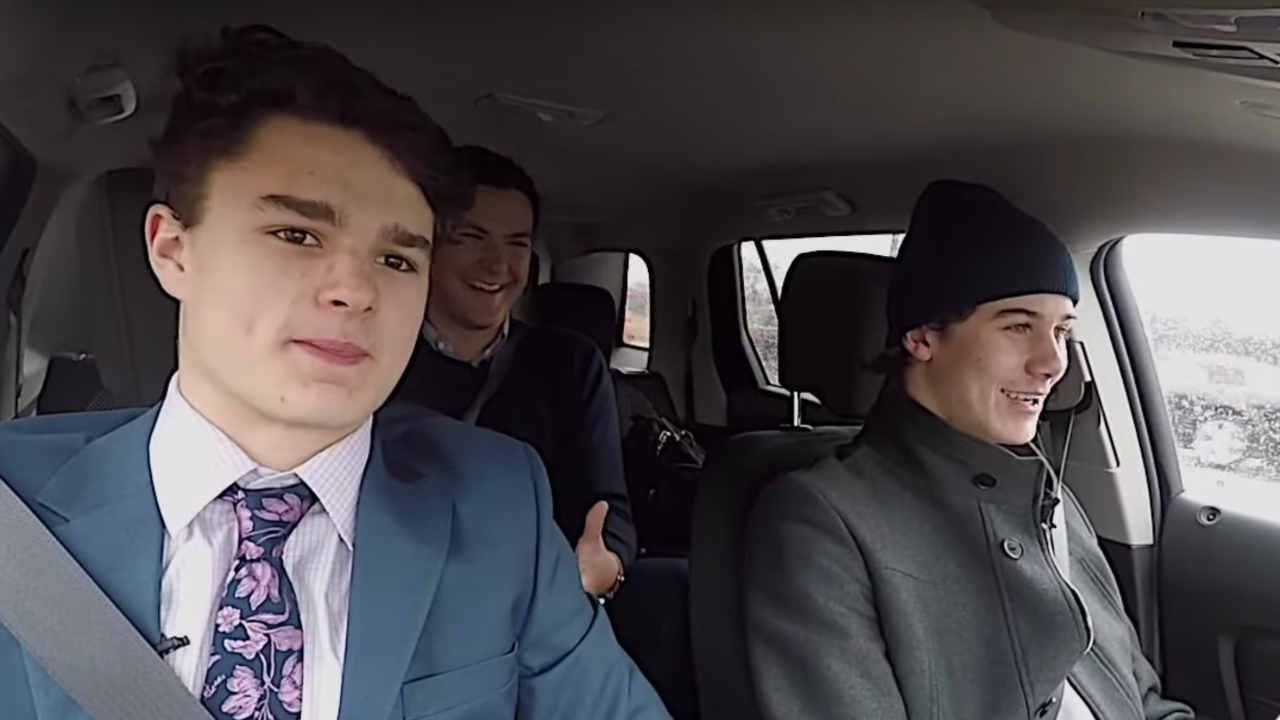 PLYMOUTH, Mich. — Jack Hughes spent two years in USA Hockey Arena building his name as the most exciting prospect in the 2019 NHL Draft.

On a Friday night in March, Hughes and the National Team Development Program invited WXYZ behind the scenes. From lunch at the Hughes house, to the car ride to the rink, our cameras followed the hockey phenom for a game night in Plymouth.

We expected to gather some incredible footage with the unique access. We got so much more.

Because on this night against the Green Bay Gamblers, Hughes had his eyes set on breaking the USA Hockey all-time scoring record. And when the Gamblers' lineup was a couple defensemen short, the chances were great we'd witness history.

Hughes was born in Orlando, and has two brothers, Quinn and Luke. The day of our visit, Quinn is in Vancouver, working to get into the Canucks lineup for his NHL debut. Luke is in Toronto with the boys' mother, Ellen, for a premier tournament.

"Me and Quinn were just talking. It's kind of surreal. You're always moving from one level to the next. There's no next level. You're there," Hughes says of his brother.

Hockey talent runs deep in the family, and that's clear when we arrive in the Hughes home. The boys' father, Jim, is watching Luke's game on a live stream. He tells us Ellen is there and won't be joining us tonight.

The Hughes family has hosted Jack's teammate, Alex Turcotte for two seasons. Turcotte is like Hughes, a top-tier NHL Draft prospect with an eye on the biggest hockey stages. The boys are just waking up from their naps as we enter.

"It's a lot of fun going through the two years with a roommate, making a brother, a best friend," Hughes tells us.

That bond was almost a long distance relationship. Hughes had opportunities to leave the NTDP after his first season. He could have played in the OHL, with brother Quinn at the University of Michigan, or overseas like Auston Matthews did before he was drafted.

Hughes stayed. He's the captain of the U-18 NTDP team.

"Going through the same experiences, I mean we eat the same food, we sleep the same patterns, we drive in the same car, and we get off the sleeper bus at four in the morning," Hughes adds.

After watching Luke's game for a bit, and going over our plans for the night, Hughes and Turcotte grab the keys and it's time to go to the rink.

Turn up the jams, keep the Michigan roots

Along the way, we find out it's Turcotte who not only picks the music for the car ride to the rink, but for the entire team in the locker room.

"Jack has some good picks, too," Turcotte adds.

This is one of the last home games these two will play at USA Hockey Arena. They're on a team with 22 draft-eligible players. The entire group is expected to be picked in the NHL Draft, and this pair is part of a group dubbed the 'Great Eight.' The program is looking at placing eight guys in the first round of this year's draft.

"My parents live here, Luke will probably be here for at least four years," Jack says of his brother, who's committed to Michigan and weeks later would make the NTDP roster for 2019-20.

Hughes watched one brother play at Michigan, and will watch another. Sandwiched in between, he stamped a legacy in the state as one of the top young hockey players to ever skate here.

I ask him how much his experiences in Michigan will stay with him.

"It'll be big. This will be the place I come back to, and it's been a really good two years here."

I pitch a three-goal, two-assist night to Hughes.

"Talk to me nice, man!" Hughes says with a laugh. "Wow. I'd pay for a night like that tonight."

Hughes makes a name for himself on the ice for his unique playmaking ability. His vision is remarkable for a teenager, and he spent two years wearing the USA crest against the top international competition tournament after tournament.

He's aware of the points record, but tries not to let it consume his thoughts on the drive to the rink.

"When it happens, it happens. I'm just trying to make it as fast as I can," Hughes says.

Turcotte hopes for a celebration tonight.

"Maybe a standing ovation," he says to Hughes with a laugh.

The last time Hughes hit a milestone, he and his buddy Cole Caufield reached second-place marks together. Hughes became the No. 2 all-time point leader in the program, and Caufield grabbed the No. 2 spot in all-time goals.

He said he didn't know how to react to the ovation and recognition from the crowd.

"It was awkward. I didn't know if I should go for a little twirl, so I just sat on the bench," Hughes laughs.

Incognito in the international spotlight

It's hard to imagine hockey fans that don't know Hughes' name at this point.

I point out to Hughes and Turcotte how strange it must be to realize their peers will be in the stands someday, buying tickets to watch them play. And those classmates don't even realize it now.

"Obviously it's different. You get a high school football kid on a Friday, wearing their jersey and they think they're the man, right?" Hughes chuckles. "But I don't think you want to be a big deal. You kinda just want to go low-key, get through the day and get to the rink."

"I think it's nice not having a ton of people know what we do, in a way. It just makes it easier," Turcotte adds.

Gameday prep inside the rink

We pull up to the parking lot attendant, who waves the car through after a brief greeting. This is one of the final times Hughes will drive here as a member of the U-18 team.

Hughes and Turcotte head into the rink, and head for the locker room.

They'll get in their warm-up gear, eat a pregame snack and make a venture to the workout facilities.

Like John Hammond in Jurassic Park, USA Hockey has spared no expense when it comes to this arena. They re-imagined the former home of the OHL's Plymouth Whalers and transformed it into a world-class arena for these teenagers.

There's an indoor turf field. Jack heads there for some light soccer work with teammates including Marshall Warren.

After Hughes and the team go through a film session, we head to the bench as the guys get dressed for warm-ups.

In the stands, there are young kids reaching for high-fives. Their parents are telling them who No. 6 is, and why they need to know the name Jack Hughes.

There's another group who's paid to watch Hughes and his teammates. They are trying to tell their bosses why they need to know the name Jack Hughes.

"I think a lot of these kids are under the spotlight. I think tonight you can see three or four general managers here, and a bunch of assistant GMs" Jack's dad Jim tells us at the rink.

He's not lying. In one corner of the rink, Ken Holland has a group of Red Wings personnel keeping a close eye on the talent on the ice. A little bit more hidden, Steve Yzerman stands feet away from Jeff Blashill in a suite above center ice.

"The whole thing is about balance. Jack has a balance. I don't think he gets too high, or gets too low," Jim Hughes says.

Once the puck drops, it's clear tonight's going to be a lopsided outcome.

They get to work.

Caufield scores 37 seconds into the game. Then he finds the back of the net again less than four minutes later. Our WXYZ photographer Danny Stricker is positioned in between the benches. The footage he'll bring back to the station is filled with goal celebrations.

Up 4-1 after the first period, Hughes picks up an assist in the second.

Then things get wild.

Hughes and Caufield connect twice to start the third period for Cole's third and fourth goals of the night. Then, with 6:07 left in the game, Hughes sets up Caufield again. They've tied the records. It's 11-3, Hughes has four assists, and Caufield has five goals.

Good to go home and call it a night, right?

Not with these two.

"We went into it knowing where we were at, but we didn't think we could get to it tonight," Caufield tells us after the game.

With just over three minutes left on the scoreboard, Hughes and Caufield are on the ice together.

Hughes chips the puck through the slot, directly to his childhood buddy and teammates.

Caufield fires it short-side into the back of the net. History is made.

"I think that's how we would have drawn it up. Me and Cole, that's a thing we've been doing for a couple years," Hughes says with a smile ear-to-ear.

The pair skates with their team as the final horn blows. The final score is 12-4, and Caufield scored half of USA's goals. Hughes grabbed five assists.

Hughes says they'll split the puck to commemorate the moment and the history. Days later, they actually saw it in half.

These guys will face off in the NHL for years to come, but on this Friday night outside Detroit, this night leaves its mark on Hughes.

"The points are great. The wins are great. But I think the biggest thing I'll come out of here with is the friendships," he says.

We'll leave the rink on that note.

They literally split the puck!

Jack Hughes and Cole Caufield set new @USAHockeyNTDP records on the same goal. They cut the puck in half. pic.twitter.com/e0JoIHGfzK