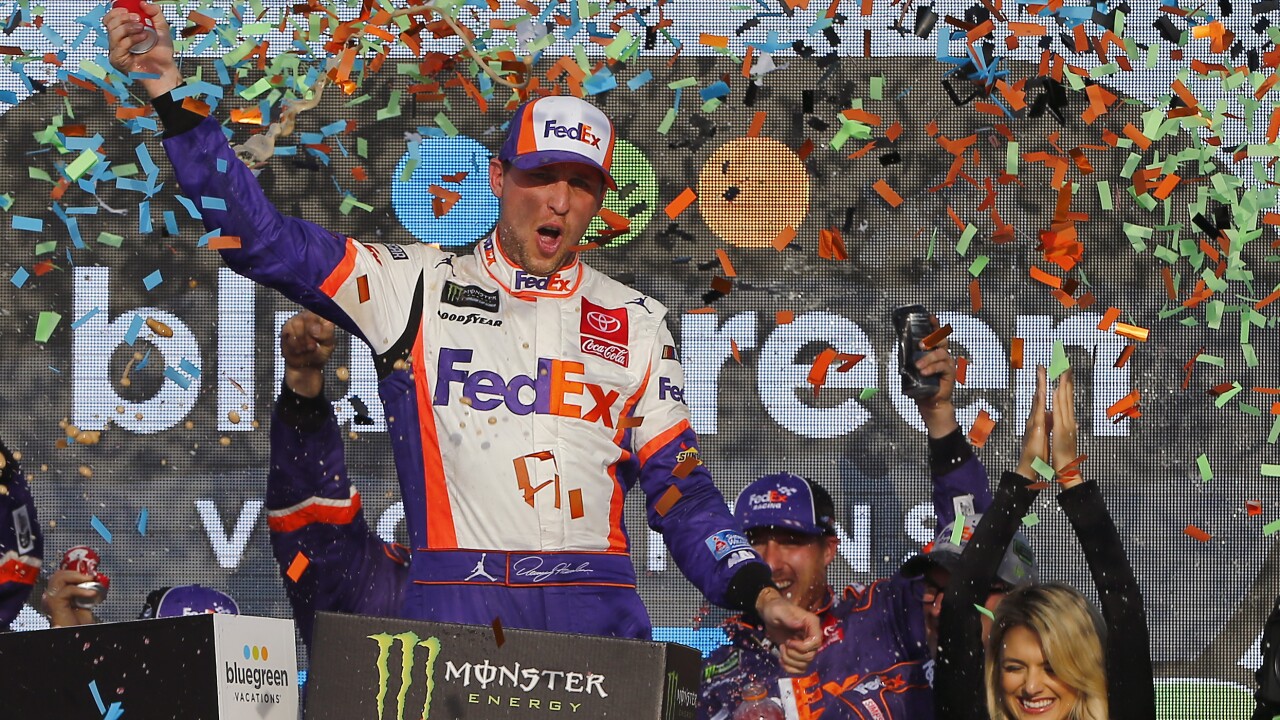 AVONDALE, Ariz. (AP) -- Denny Hamlin made a mistake last week that could have ruined his season.

Undeterred after falling below the cutline to race for the championship, Hamlin boldly stated "It's not over" about his chances.

He proved that Sunday by winning at ISM Raceway to advance into NASCAR's title-deciding race for the first time since 2014. His victory eliminated NASCAR champion Joey Logano from the playoffs and gave Joe Gibbs Racing and Toyota three of the slots in next week's championship at Homestead-Miami Speedway.

"I try not to put too much into it," Hamlin said. "There's still work to be done. Doesn't guarantee a championship. Gives us a chance. Live to fight another day. That's all you can ask for."

Hamlin, the Daytona 500 winner and a favorite to win the title, faced elimination after spinning last week at Texas and came to Phoenix determined to win and claim his spot in the final four. He had the race well under control until a caution with nine laps remaining set up a final restart.

Hamlin, who had been terrible on restarts the entire race, punched his steering wheel in anger when the yellow flag waved. His Joe Gibbs Racing team made an unusual call to take just two tires -- the same strategy as contender Ryan Blaney -- and the two lined up next to each other for the restart with three laps to go.

Hamlin finally got a decent restart, pulled into the lead, and Gibbs teammate Kyle Busch passed Blaney to put a buffer between the two.

Hamlin then cruised to his sixth win of the season and punched the air with his fist in his car as he crossed the finish line. He jumped into the arms of his waiting crew, which he had promised earlier Sunday to give his all in an effort to make the championship field at Homestead-Miami Speedway.

"This race team worked so hard this whole year. They deserve to be there," Hamlin said of his No. 11 crew. "I put them in a bad hole last week. I told them today in the meeting, I said, `I'm going to give everything I've got to make up for the mistake I made last week.' That's all I got."

Hamlin will race Gibbs teammates Busch and Martin Truex Jr., as well as Kevin Harvick of Stewart-Haas Racing, for the championship. Gibbs, winner of 18 races this season, and Toyota have three of the slots in the final four.

"I feel like we are all here because we worked together," said Truex.

Chevrolet will not be represented for the third consecutive season and Harvick races a Ford.

Chase Elliott, Kyle Larson, Blaney and Logano were eliminated. Logano was seeking a chance to make it back-to-back titles but had a mechanical problem early in the final stage that dropped him deep into the field.

"No clue. An air pressure adjustment made it go from a winning car to not able to stay on the lead lap. That sounds ridiculous," said Logano. "We'll live. Everything is going to be OK. We're still fortunate to be here and grateful to do what we love."

Elliott's championship chances ended with a crash in the final stage. He had to win to earn a berth at Homestead after a disastrous third round of the playoffs.

NASCAR's most popular driver had a mechanical problem at Martinsville, crashed last week at Texas and crashed Sunday when he appeared to have a tire issue that caused him to spin.

"Just a continuation of our first two weeks," Elliott said. "I feel like we were in a good position to run solid. Not sure why we had a tire go down, I think that's what happened. These last three weeks have been rough."

Sunday's championship-deciding finale at Homestead-Miami Speedway, the last time the track will host the finale. Logano is the defending race winner.