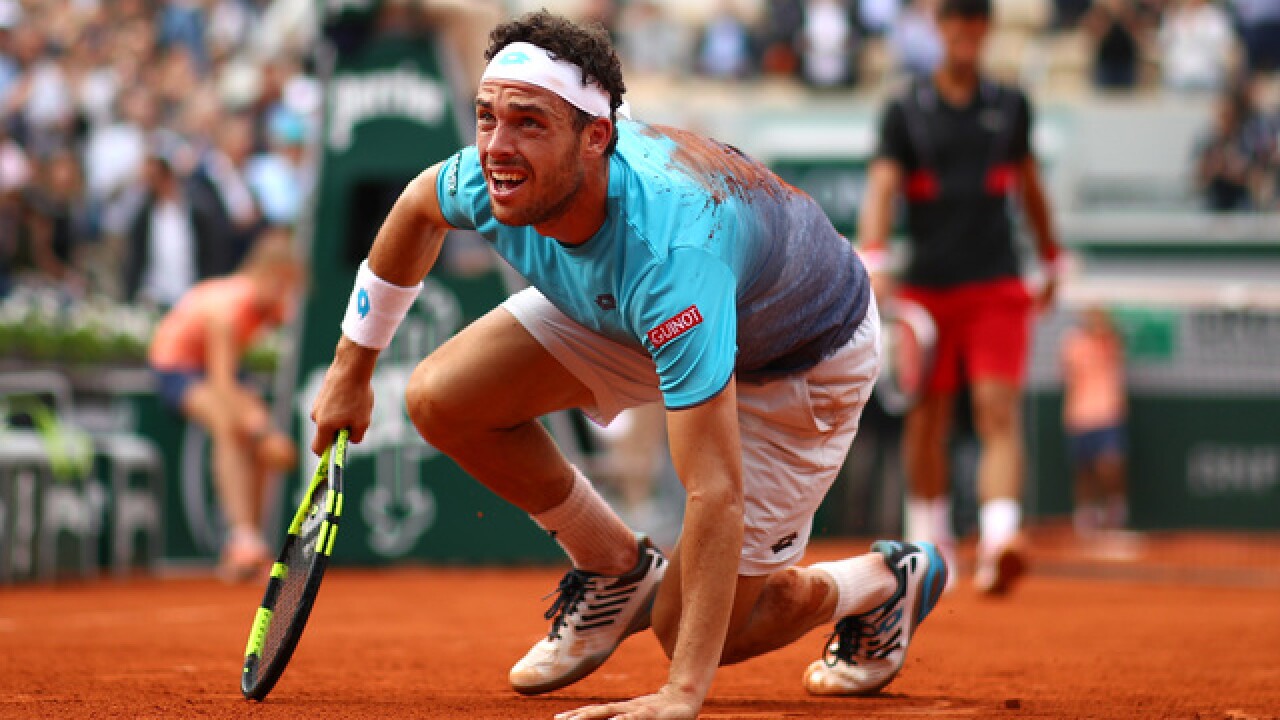 PARIS (AP) -- Novak Djokovic's neck was bothering him. Then his right leg was.

The way he faltered at the most crucial of moments in the French Open quarterfinals Tuesday might have hurt him the most against an opponent who never won a Grand Slam match until last week and once was handed a match-fixing suspension later overturned on appeal.

"He held his nerves amazingly well in important moments," acknowledged Djokovic, who said he isn't certain whether he will play at Wimbledon.

Djokovic served for the fourth set at 5-3 but got broken. He then held three set points in the tiebreaker but couldn't convert any.

"It's a pity I could not capitalize on the chances I had," Djokovic said.

Cecchinato (it's pronounced cheh-key-NAH'-toe) came through on his fourth match point, looping in a backhand return winner as Djokovic tried to surprise him with a serve-and-volley attempt. Cecchinato, who dropped onto his back on the clay after winning, is the lowest-ranked man to get to the semifinals in Paris in 19 years -- and about as unlikely as anyone to get this far at a big tournament.

Told in an on-court interview that he wasn't dreaming, Cecchinato responded: "Are you sure?"

The 25-year-old from Sicily was suspended for 18 months and fined 40,000 euros (about $45,000) by his national federation in July 2016, accused of losing on purpose at a lower-tier Challenger event in Morocco a year earlier. Eventually, the Italian Olympic Committee announced that sanctions were dropped on a technicality.

Cecchinato has never won a tour-level match on a surface other than red clay; as it is, he entered this season with a career record of 4-23.

He arrived at Roland Garros with a 0-4 mark in the majors, and dropped the first two sets in the first round before coming all the way back to win 10-8 in the fifth. Since then, employing a smooth one-handed backhand, he has beaten players seeded No. 8 (David Goffin) and No. 10 (Pablo Carreno Busta), before adding former No. 1 Djokovic to his list.

Next up: No. 7 seed Dominic Thiem of Austria, who made it to his third consecutive French Open semifinal by beating No. 2 Alexander Zverev of Germany 6-4, 6-2, 6-1 earlier Tuesday.

In the women's quarterfinals, No. 10 Sloane Stephens beat No. 14 Daria Kasatkina of Russia 6-3, 6-1, and No. 13 Madison Keys eliminated unseeded Yulia Putintseva of Kazakhstan 7-6 (5), 6-4. Stephens beat Keys in the U.S. Open final last September, and their rematch on Thursday will be the first all-American women's semifinal at the French Open since Serena Williams defeated Jennifer Capriati in 2002.

Cecchinato and Djokovic know each other well: They have practiced together in Monte Carlo, where Cecchinato trains at a tennis academy and Djokovic has a home.

No one, though, could have seen this one coming. Perhaps the most remarkable part of this result was that Djokovic repeatedly failed to close out the fourth set and force a fifth.

Djokovic, who missed the last half of 2017 with right elbow trouble and had surgery in February, is clearly not at the height of his power. Indeed, his seeding of No. 20 was his lowest at any Grand Slam tournament in a dozen years.

Still, Djokovic did appear to be gathering momentum, taking the third set and moving out to a lead in the fourth. He could not do enough to end Cecchinato's marvelous run, though.