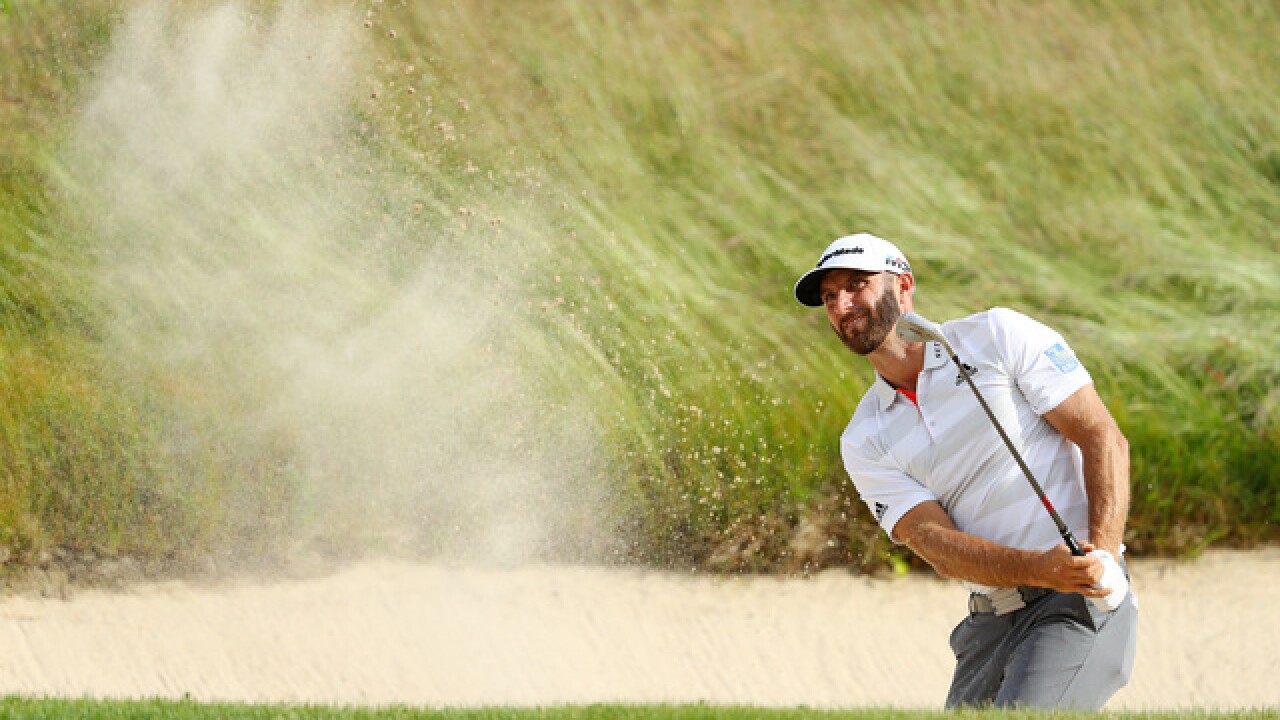 Copyright Getty Images
Warren Little
<p>SOUTHAMPTON, NY - JUNE 14: Dustin Johnson of the United States plays a shot from a bunker on the 14th hole during the first round of the 2018 U.S. Open at Shinnecock Hills Golf Club on June 14, 2018 in Southampton, New York. (Photo by Warren Little/Getty Images)</p>

SOUTHAMPTON, N.Y. (AP) -- The return to a classic U.S. Open course brought back the kind of scoring that gave this major its reputation.

Dustin Johnson played some of his best golf Thursday and yet the world's No. 1 player barely beat par in the treacherous wind at Shinnecock Hills. Johnson holed a bunker shot for birdie, kept his mistakes to a minimum and joined Ian Poulter, Scott Piercy and Russell Henley at 1-under 69 for a share of the lead.

"You had to focus on every single shot you hit -- putts, everything," Johnson said. "It was just difficult all day."

No need to tell that to Tiger Woods, Rory McIlroy, Jordan Spieth and a long list of golf's bests who had their hopes crushed in gusts that approached 25 mph that made fairways look more narrow and the shin-high rough difficult to avoid.

In his return to the U.S. Open after a two-year absence, Woods opened a major with a triple bogey for the first time in 15 years. He added back-to-back double bogeys on the back nine and staggered to a 78.

Spieth waited until the second hole to make a triple bogey, blasted out of a bunker and over the 11th green, and then took three shots to get on the putting surface. McIlroy found trouble just about everywhere and shot 80, his highest first-round score in a major.

"It was pretty evident nobody was making any birdies in the morning -- lots and lots of bogeys and `others,"' Woods said. "My game plan was not to make any `others,' and I made three of them. So didn't do very well there."

It was quite a contrast from last year at Erin Hills in Wisconsin, which set a record for the first round by yielding 44 rounds under par.

Piercy, the last man in the 156-man field as an alternate from qualifying, was so disgusted with his game in his final practice round that he walked off the course. He dropped only two shots, both on par 3s, and was the first to post a 69. Poulter also played in the morning, while Johnson and Henley played in the afternoon as the wind reached its full strength.

Henley was the only player to reach 3 under at any point, and he promptly gave that back with a double bogey on No. 10.

Jason Dufner opened with a 70, and even those at 1-over 71 felt as though they put in a hard day's work, a group that included Justin Rose and Henrik Stenson.

"It's a different kind of enjoyment, right?" Rose said. "I enjoy the battle. I enjoy the fight. I enjoy the grind, really. When you get a bit cut up and bruised, it can change pretty quick."

Johnson is coming off a six-shot victory last week in the St. Jude Classic, and while no one has ever won the U.S. Open coming off a PGA Tour victory the week before, he played as though nothing had changed. He holed medium-length putts for birdies, a few nervy, short putts for par and picked up a bonus when his shot from a front bunker on the par-4 eighth rattled and rolled into the cup.

Not even Johnson was immune from mistakes, however, dropping shots on the 12th and 14th holes.

It didn't take long to figure out what kind of test this was going to be, with the 15 flags atop the grandstand next to the 18th green already flapping as the first group teed off, and they were crackling by the afternoon.

Phil Mickelson, needing the U.S. Open to complete the Grand Slam, played in the feature grouping with Spieth and McIlroy. They finished a combined 25-over par, with Mickelson taking honors at 77. It was his highest opening round in his 27 U.S. Opens. Mickelson refused a request to speak to the media about his round.

So did McIlroy, who had a pair of double bogeys in his third round of 80 or more in a major.

From the middle of the first fairway, he went long over the green. He chipped once and it came back to his feet. He tried it again with the same result, and then rapped his putter up the hill by the hole and missed the putt. He held it together until a four-putt on No. 13, the last three of those putts from 6 feet.

"Shoot something in the 60s tomorrow, and I'll be just fine," Woods said. "I just think today was the toughest day we'll have all week. But then again, I think they're going to let these greens firm out a little bit. They'll start to pick up a little bit of speed, and it will be a good U.S. Open again."

That already appears to be the case.

The U.S. Open has gone to new courses two of the last three years, and Jack Nicklaus is among those who feared it had lost its identity. Even with wider fairways, Shinnecock Hills resembled a U.S. Open course from past years, and it played like one.