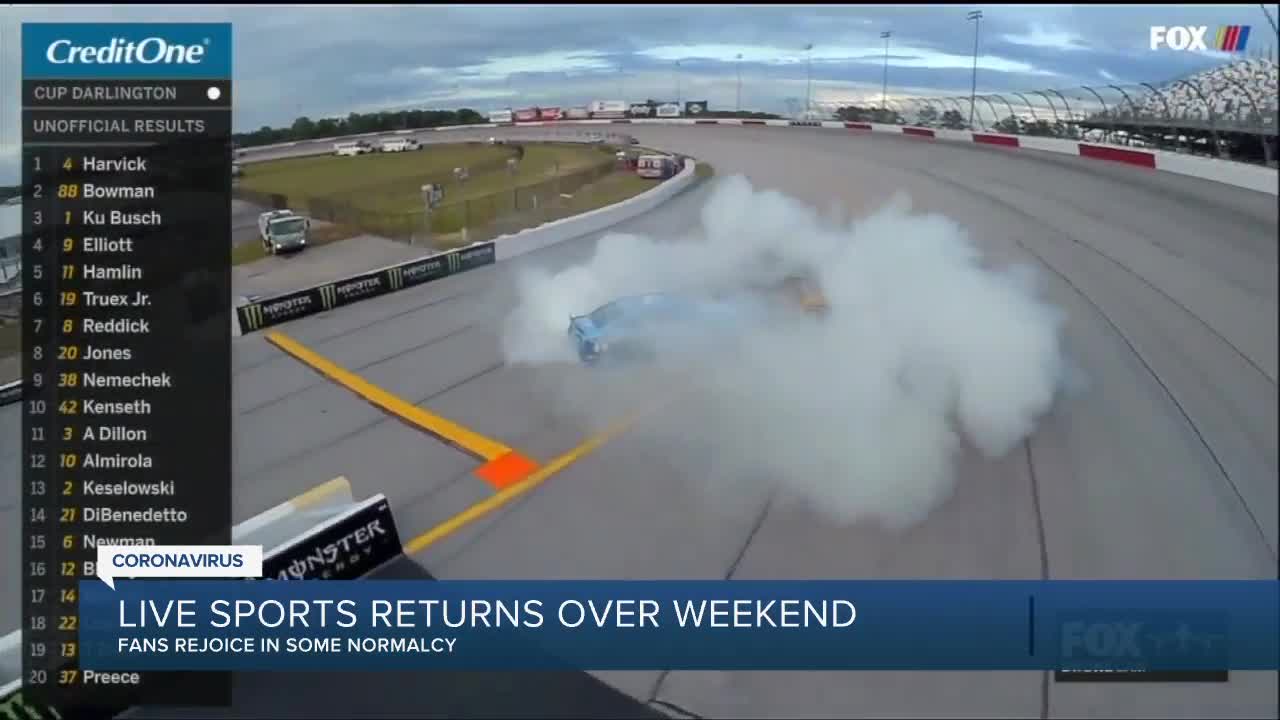 Sports fans celebrated over the weekend as the first live sports aired since the coronavirus shut down.

WXYZ — There’s no doubt that sports fans have been starved for some live sports and yesterday as two of them happened for the first time in two months the numbers reflected that.

It was the most-viewed NASCAR race since 2017, with 6.32 million viewers tuning in, and the people we spoke with today gave me a sense that sports returning is major step forward for our general psyche.

“I went to bed on Saturday night, early, and I woke up Sunday, and it felt like a normal Sunday,” NASCAR fan Jarrett Maki said.

The TaylorMade Driving Relief skins game featuring four of the world’s best golfers and a the first NASCAR race since mid-March was a breath of fresh air to many sports fans around the area that have been waiting for a reason to get excited about something new.

“I had my whole Sunday set up around, being on the couch, I had prepped for making some Philly cheesesteak sandwiches, I had some chips and queso, I had a whole thing set up to watch it,” golf fan Trevor Pampalona said.

“There’s some normalcy sitting on the couch watching golf on Sunday with your dad like you have so many times, but the reminder is always there, wow look at that shot, the guys are waiting for the reaction from the fans that doesn’t come,” golf fan Adam White added.

But the players and drivers must know that in homes around the country there were cheers. Loud ones. Consider this, for the first time in more than two months, there was an ending to the show, you didn’t already know about.

The beauty of sports is just that, not knowing an outcome is part of the joy.

“When you know who wins, you lose the suspense,” White said.

“Yesterday was great with the golf and NASCAR, to not know what was going to happen and have a new result in the history books,” Maki added.

“It was nice that it came down to the end too, there was some drama there, a lot of money on the line, it was really cool to now know the outcome, it was awesome,” Pampalona said.

As for those record books, Kevin Harvick won his 50th career race, while Rory McIlroy and Dustin Johnson won the skins match and those guys will forever be the first winners of any professional sports event post COVID-19 pandemic.