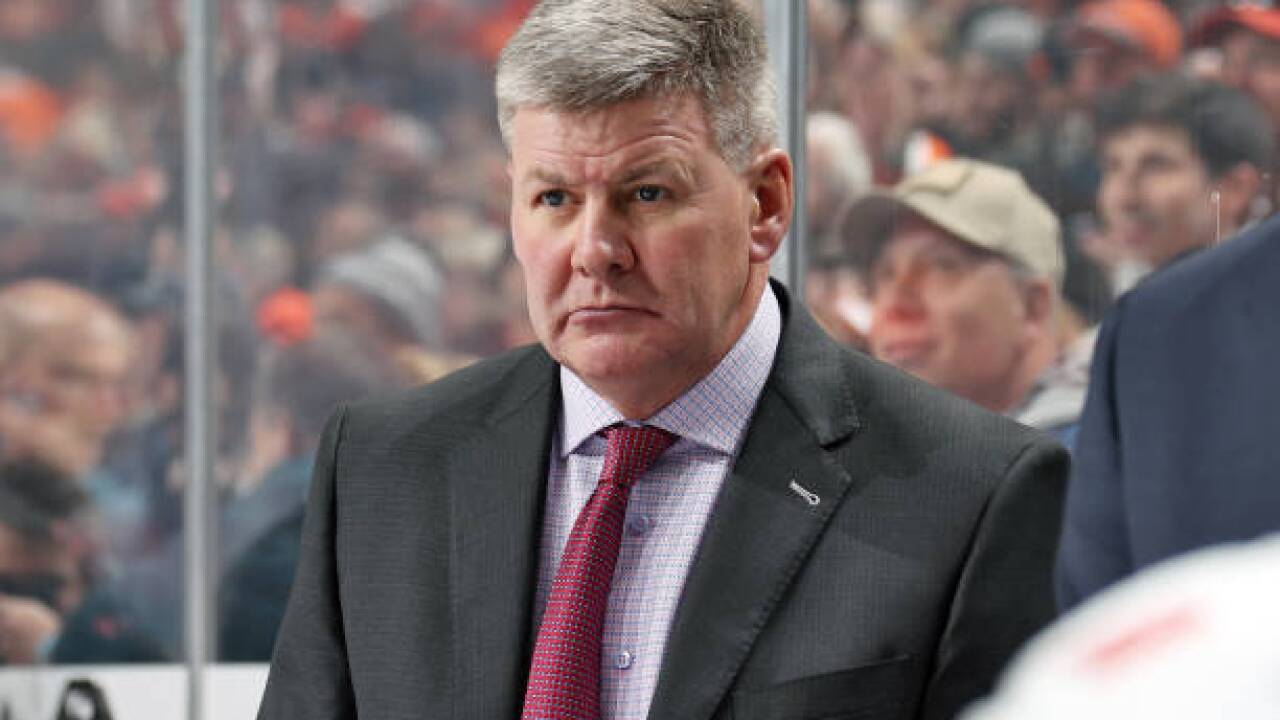 Bill Peters resigned as coach of the Calgary Flames on Friday after allegedly making racist slurs at a Nigerian-born player in the minors and kicking and punching players behind the bench during his time with Carolina.

General manager Brad Treliving said he received a resignation letter from Peters that wraps up a weeklong investigation into the veteran coach's behavior. He refused to discuss whether Peters would be continue to be paid, saying only, "He's no longer with the organization."

"We consider the matter closed," Treliving said at a news conference in Calgary, Alberta. "It's been a difficult time. But we are going to move forward."

Assistant Geoff Ward takes over as interim coach with the Flames 12-12-4 and in ninth place in the Western Conference.

Peters has not been on the ice or behind the bench with his team since former player Akim Aliu leveled the accusations of racist slurs on Twitter on Monday night.

Peters went from helping the Flames win 50 games and the Pacific Division title in his first season to perhaps having his career and future in the sport come to an abrupt end over questions about his coaching methods.

The allegations about Peters began during Calgary's 2-1 overtime loss at Pittsburgh on Monday.

Aliu alleged Peters "dropped the N bomb several times towards me in the dressing room in my rookie year because he didn't like my choice of music." It happened during the 2009-10 season while the two were with the Chicago Blackhawks minor league affiliate in Rockford, Illinois.

"That type of behavior just has no place," Treliving said Friday.

The allegations led to stern rebukes from team officials and the NHL even before concluding their investigations.

Treliving called the "repulsive," and said, "This is subject matter that has no place in our organization." The NHL called the alleged behavior "repugnant and unacceptable."

In a letter addressed to Treliving, Peters said he regretted such conduct and apologized to anyone negatively affected by it. Aliu called Peters' statement "misleading, insincere and concerning."

Also this week, Hurricanes coach Rod Brind'Amour confirmed Peters physically abused his players behind the bench while in Carolina. Brind'Amour, who was a member of Peters' staff, said "for sure that happened" in backing former Hurricanes defenseman Michal Jordan saying the coach kicked him and punched other players.

Treliving oversaw the investigation this week and spoke to Aliu at least twice, among others.

Aliu acknowledged he rebelled against Peters and said the coach eventually asked Blackhawks executives John McDonough and Stan Bowman to send him to a lower minor league level.

The Blackhawks issued a statement saying nothing had previously been brought to their attention regarding Peters and Aliu before Monday. The team added it had no effect on any player personnel decisions involving Aliu.

The 54-year-old Peters made the jump to Rockford after leading the Western Hockey League Spokane Chiefs to a Memorial Cup championship in 2008.

Aliu played under Peters during the 2008-09 and 2009-10 seasons. He was demoted to the Toledo Walleye of the ECHL during the 2009-10 season. Aliu, who was born in Africa but raised in Ukraine and Canada, later played seven NHL games over two seasons with Calgary.

The 30-year-old Aliu has had a transient career since being selected by Chicago in the second round of the 2007 draft.

He's not playing this season after appearing in 14 games with Orlando of the ECHL last year. The Solar Bears were Aliu's 11th team over a six-year span, which included stops in Russia, Sweden and Slovakia.

Aliu's tweets came after reports surfaced of how poorly Maple Leafs coach Mike Babcock dealt with his players in Toronto before he was fired several days ago. Forward Mitch Marner confirmed that during his rookie season Babcock asked him to rank Maple Leafs players in order of how hard they worked. Babcock then shared Marner's list with numerous players.