After poor start, Lions have steadied themselves 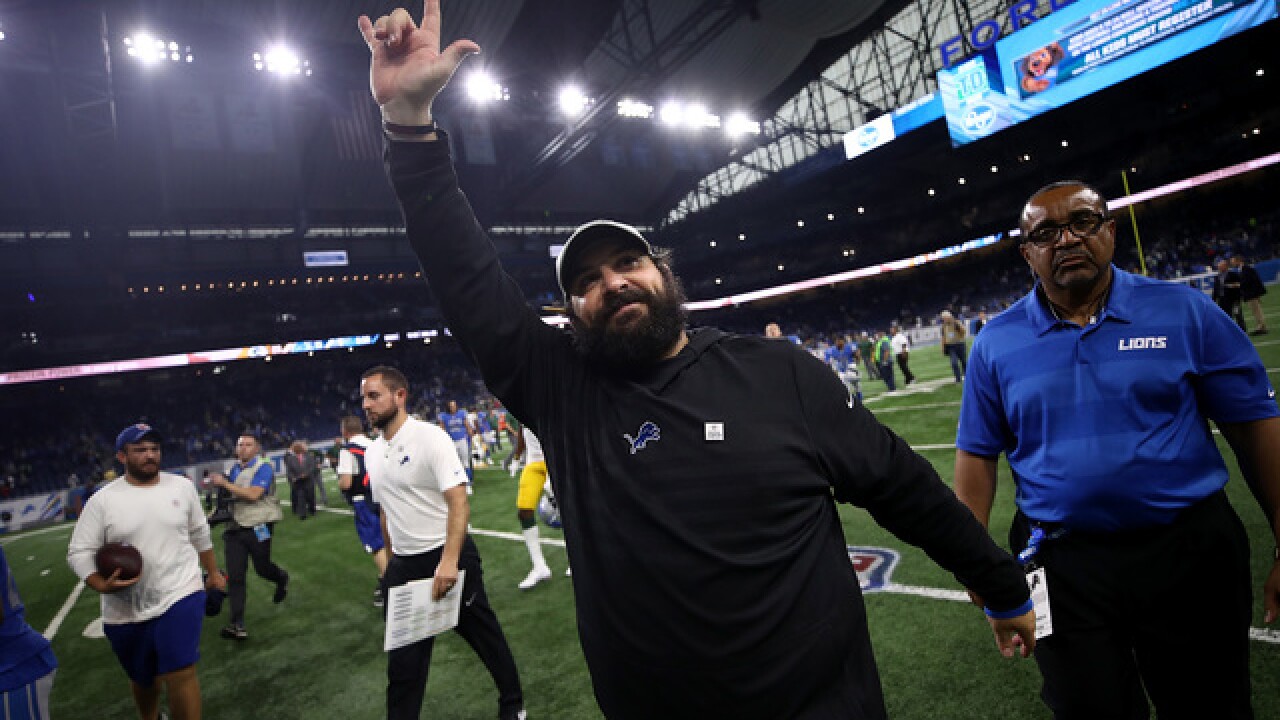 ALLEN PARK, Mich. (AP) -- The last time the Detroit Lions entered their open date with a losing record, they fired the general manager.

This year, the break in the schedule has been a bit quieter.

The Lions are 2-3 and have certainly had their problems during the early part of this season, but after winning two of their last three games, they appear to have achieved some stability. At the very least, there's no sense of panic -- and that's noteworthy given how poorly Detroit's first couple games went.

"We just know what we have. The games that we lost, we had a lot of mental mistakes," receiver Marvin Jones said. "When we're a team that doesn't do that and has less penalties, and can keep a sustained drive and stuff like that, it's completely different. That's all we have to do is keep doing that."

It was hard to imagine a more distressing beginning for the Lions than their 48-17 loss to the Jets in their season opener. That was new coach Matt Patricia's first game, and Detroit let a bad stretch in the third quarter snowball into a rout. A loss at San Francisco the following weekend had the Lions staring at a possible 0-5 start, since their next three games would be against New England, Dallas and Green Bay.

Detroit did start 0-5 back in 2015, and at 1-7, the Lions fired GM Martin Mayhew. After that, Detroit produced back-to-back 9-7 seasons, making the playoffs in one of them, but the Lions wanted more and made a coaching change last offseason, bringing in Patricia to replace Jim Caldwell.

"Coach Caldwell and Patricia are completely, totally opposite as people. It will be some changes, but with anything, you get used to them," receiver Golden Tate said. "You've just got to adjust."

After the first two games, Detroit seemed in danger of taking a big step backward this year. That may still happen, but the past three games have given the Lions reasons to be hopeful. Patricia's first win came against his former team when Detroit beat New England . Last weekend, the Lions held off Green Bay 31-23 in Patricia's first game against an NFC North opponent.

"Hopefully we are getting better. I think we are," Patricia said. "I would say there are still some things that, after getting done watching all the tape, that I'm probably going to make sure we get corrected pretty quick here coming out of (Sunday's) game. It wasn't really all perfect."

Detroit had some good fortune last weekend when Mason Crosby of the Packers missed four field goals and an extra point, but the Lions have improved in some tangible ways. Matthew Stafford threw four interceptions in the season opener but has only one since, and Detroit's long-dormant running game has at least become serviceable with rookie running back Kerryon Johnson. The Lions are ranked 21st in rushing offense this season after finishing 28th, 32nd, 30th and 32nd the past four years.

"When you break the huddle and you're at the line of scrimmage and the defense really isn't sure if it's a run or if it's a pass, that's a pretty good position for an offense to be in," offensive coordinator Jim Bob Cooter said. "If you're making yards on the ground, you're making yards throwing the ball, you're a little bit of a dual threat there for the defense, it can put them in some difficult situations."

The Lions have plenty of issues they still have to deal with. They're ranked 27th in total defense, and defensive end Ziggy Ansah -- back this season on the franchise tag -- has missed four straight games with a shoulder injury. Detroit hasn't won away from home, and three of its next four games are on the road, starting with a matchup at Miami on Oct. 21.

Still, the Lions have kept their season from falling apart after a terrible start. If they can make it to the halfway point in decent shape, then Patricia will have every opportunity to turn his debut year into a success.

"It's early in October, so hopefully we can keep progressing," Patricia said. "But I think, I hope we're moving in the right direction."