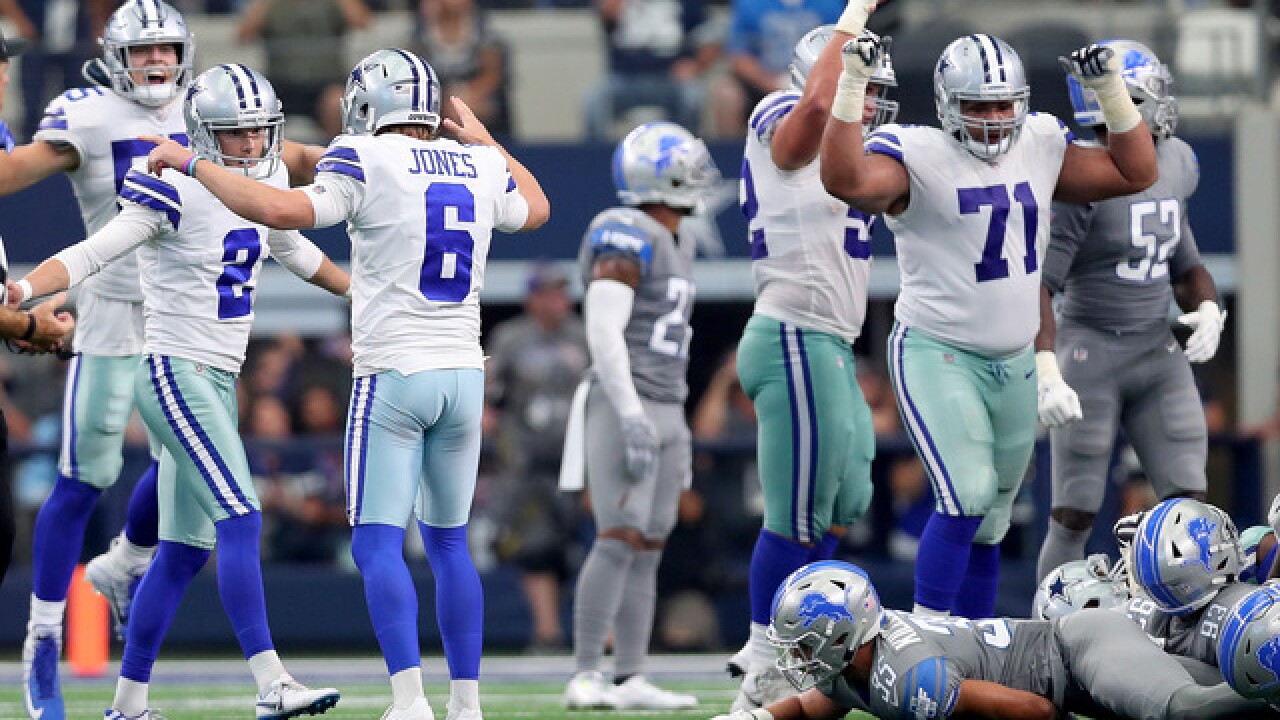 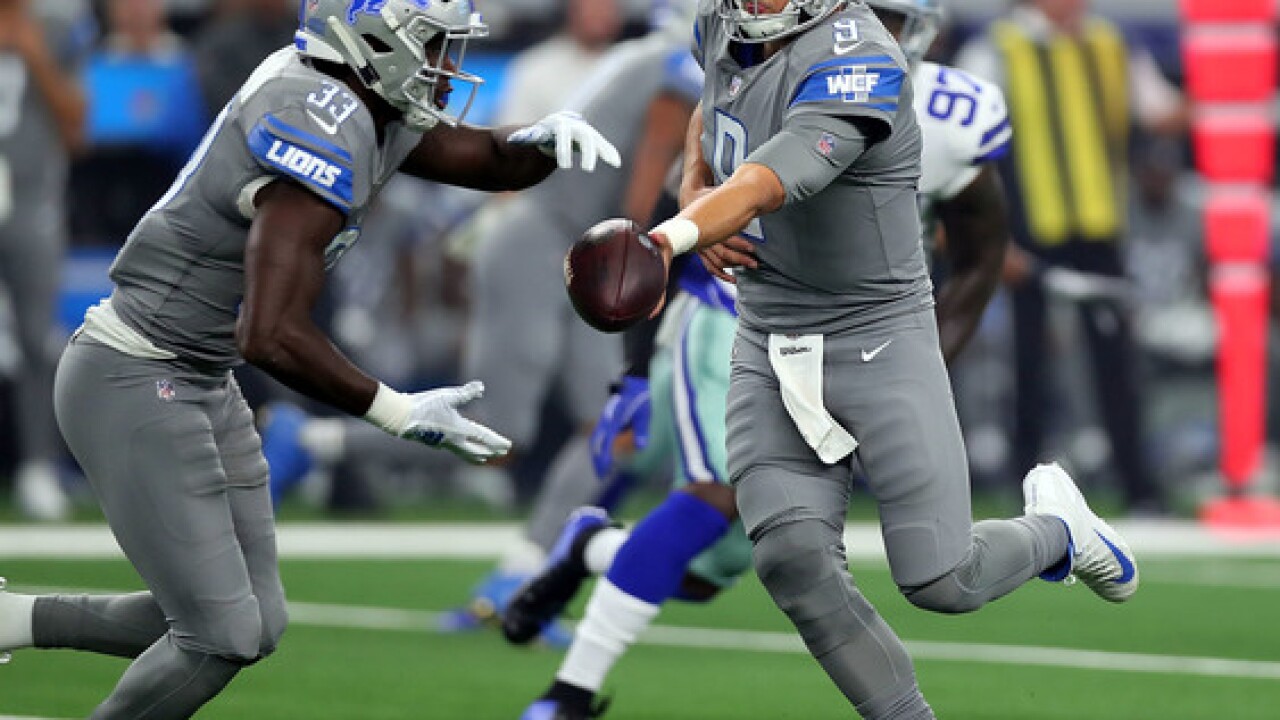 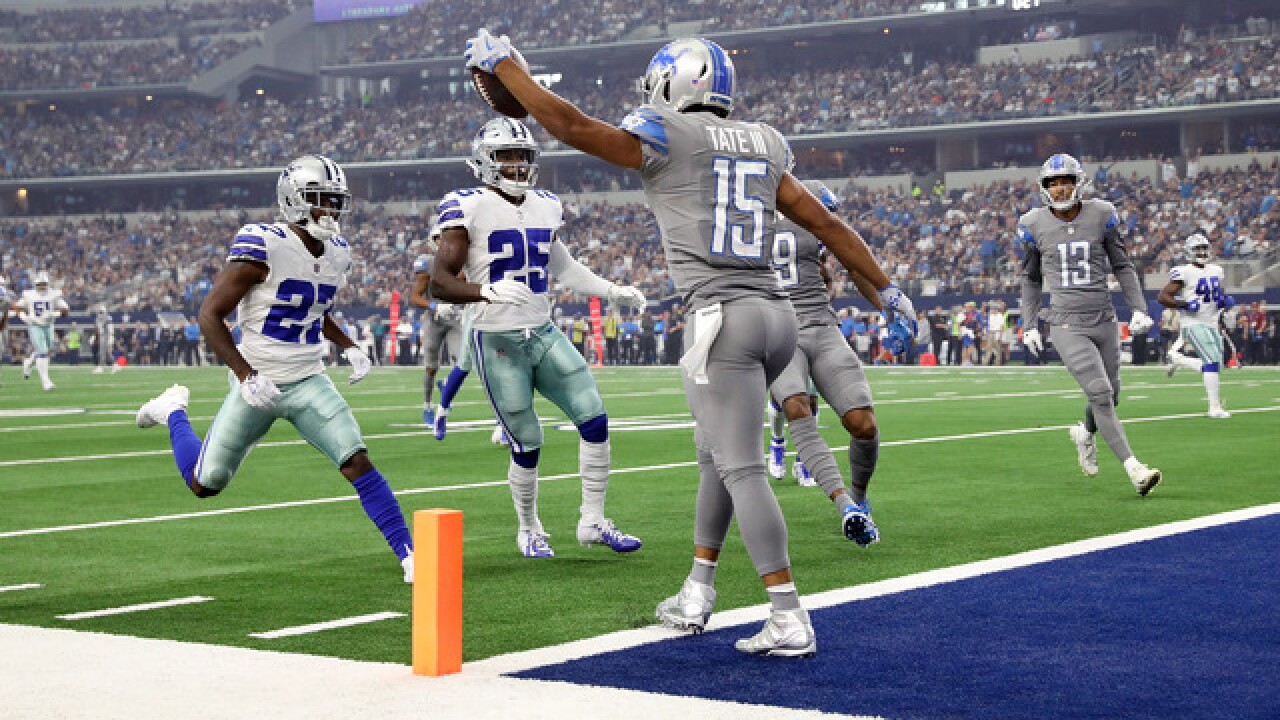 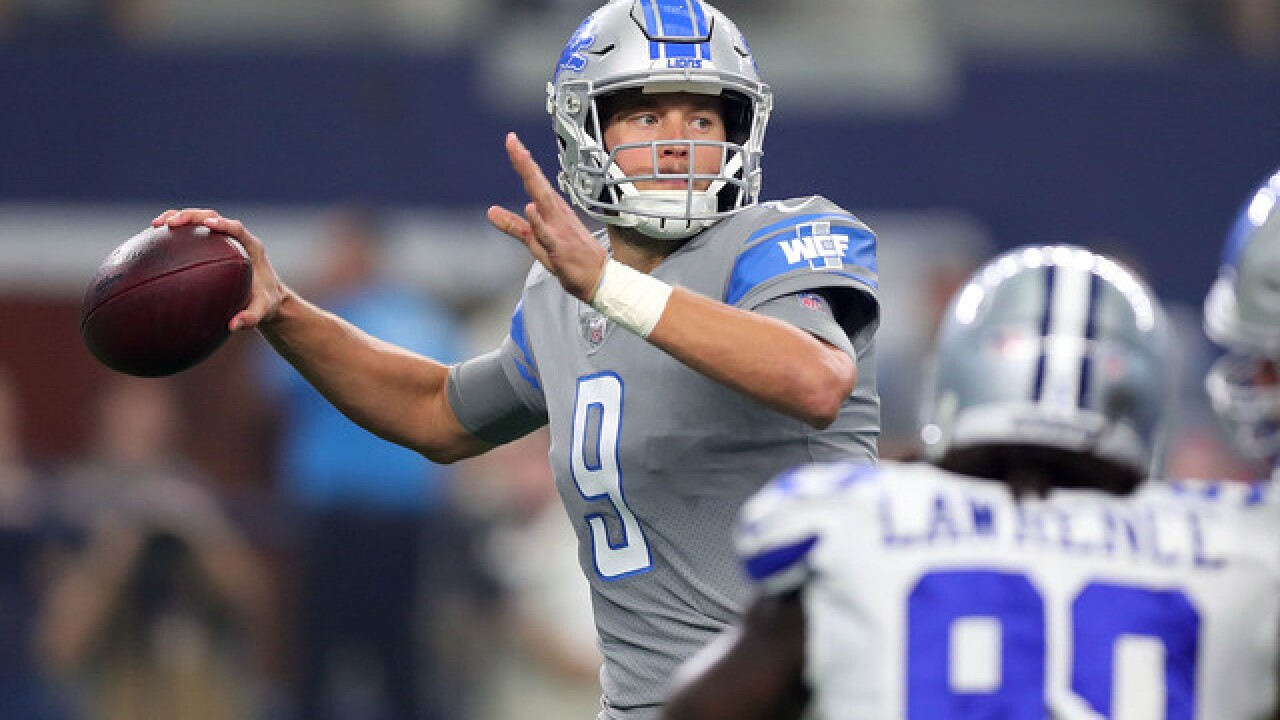 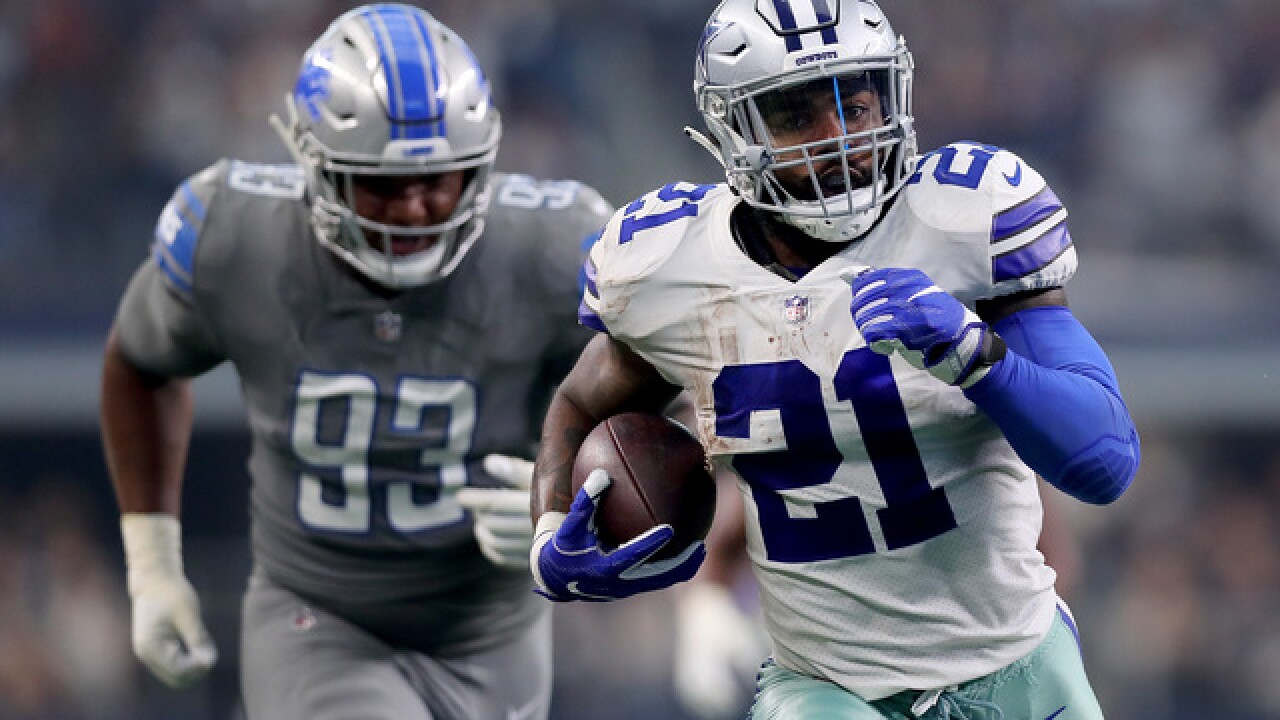 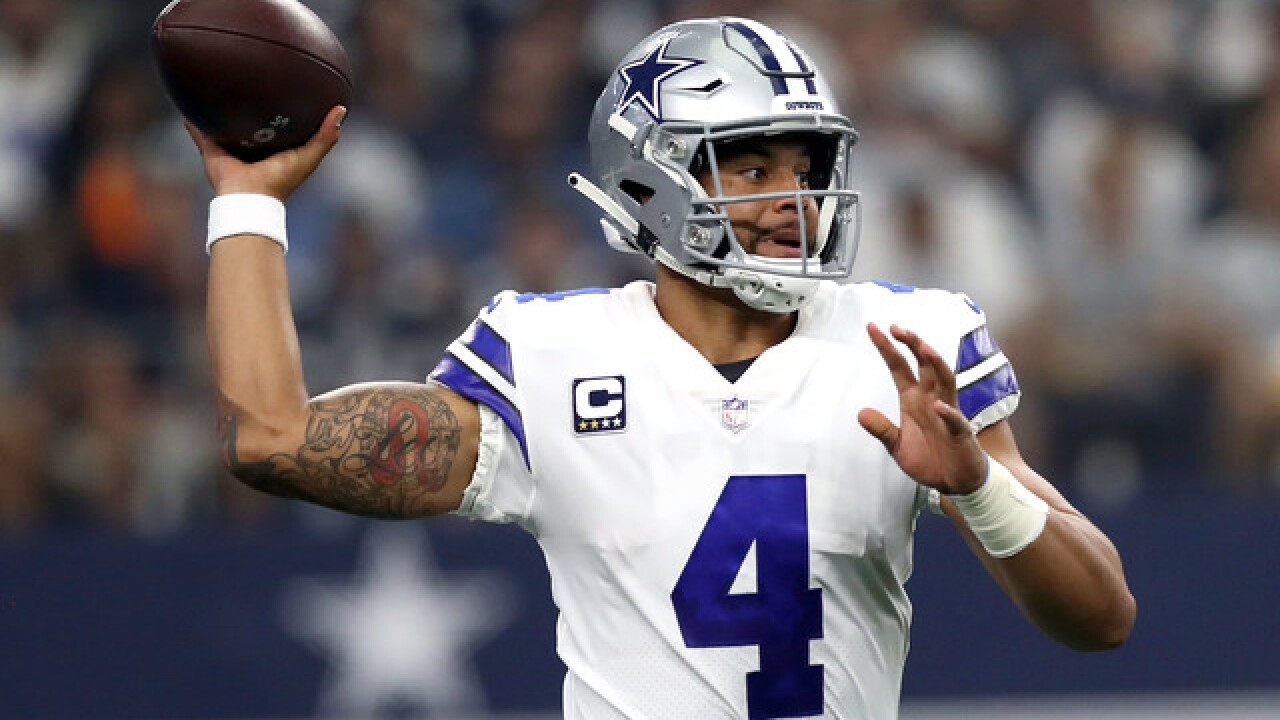 ARLINGTON, Texas (AP) -- Dak Prescott saw single coverage by a linebacker on Ezekiel Elliott with the Dallas Cowboys trying to get in position for a winning field goal against the Detroit Lions.

"I lined up in the slot. I was excited," said Elliott, who was face-to-face with leading Detroit tackler Jarrad Davis. "I was excited. I got them one-on-one with me. He made a perfect throw. One pass, we won the game."

Prescott's 34-yard toss on a deep throw to his star running back set up Brett Maher's 38-yard field goal as time expired, lifting the Cowboys to a 26-24 victory Sunday and once again spoiling Matthew Stafford's homecoming.

Maher's fourth field goal came after Elliott got a step or so behind Davis and made an over-the-shoulder catch on his way to a career-best 240 all-purpose yards. Elliott had 152 yards rushing and 88 receiving, also highlighted by a 38-yard touchdown on a screen in the second quarter.

"Anywhere you got him the ball, anywhere he had the ball in his hands, he was dominating the game and setting the tone, from the screens to the check-downs to that last play right there," Prescott said. "It was just a dominating performance for him."

The winning play came after Stafford had put the Lions (1-3) in front with 2:17 remaining on a 38-yard touchdown to Golden Tate , their second TD connection of the day.

The best day of the season for a previously struggling Dallas offense -- 414 yards -- handed Stafford his third straight loss at the home of the Cowboys (2-2), seven years after his only win in his first trip to AT&T Stadium. The former Dallas-area high school star threw for 307 yards.

"I would much rather be the guy with the ball last," said Stafford, who lost a playoff game in his hometown almost four years ago. "But I think all of our players on defense are probably sitting out there going, `I want to be out there to make the stop.' That's just what we do."

Trailing 20-10, Stafford led the Lions 75 yards to rookie Kerryon Johnson's first career touchdown , an 8-yard run that started a back-and-fourth final quarter. Johnson ran 32 yards on the first play of the game and finished with 55 yards.

After the Cowboys settled for Maher's third field goal on an 85-yard drive, Stafford found Tate for 35 yards into Dallas territory before Tate easily beat zone coverage down the sideline and strutted toward the end zone, just as he had on a 45-yard score in the first quarter.

Prescott had an answer while throwing for at least 200 yards for the first time this season. The Dallas quarterback saved the final drive by picking up his fumble when he was hit on the arm and scrambling before throwing the ball out of bounds.

Prescott then converted a third down and two plays later hit Elliott in stride on the decisive play. The Cowboys killed the clock to set up Maher, the kicker they chose over Dan Bailey -- the second-most accurate kicker in NFL history -- at the end of the preseason in a cost-cutting move.

"My draft is same every time I step on the field, no matter what," said Maher, who has made all eight kicks since missing the first of his NFL career in an opening loss at Carolina. "I was going out there trying to be 1 for 1 again."

Elliott had a season-high 25 carries for his 152 yards, and Prescott was 17 of 27 for 255 yards with two touchdowns, including tight end Geoff Swaim's first career score.

Stafford was 24 of 30 with the two scores to Tate, who had eight catches for 132 yards.

ROUGHING THE PASSER
The touchdown screen to Elliott was set up by a roughing-the-passer penalty against Romeo Okwara. The question was whether the whistle had blown when he hit Prescott, who was trying to escape pressure when he stumbled out of an attempted tackle and went to a knee. Prescott popped up but had stopped moving, anticipating that he was down, when Okwara knocked him to the ground. Officials discussed the play before announcing two defensive penalties. The other was an illegal contact call against Darius Slay.

CAREER FIRST
Dallas receiver Terrance Williams was a healthy scratch for the first time in his six-year career. The Cowboys have struggled for consistency with their pass catchers in the first season without Jason Witten and Dez Bryant. They have seven receivers on the 53-man roster. Williams was the odd man out this week, and was a no-show at practice Friday.

SACK MASTER
DeMarcus Lawrence matched his career high with three sacks after Stafford came in having been brought down just three times combined in the first three games. Those were all three Dallas sacks. Lawrence has at least half a sack in all four games.

INJURIES
Lions: RG T.J. Lang didn't return after sustaining a concussion in the first quarter.
Cowboys: WR Tavon Austin injured his right shoulder falling to the ground after dropping a potential touchdown catch in the first half. He returned in the second half. ... DT Antwaun Woods left in the first half with a calf injury. Woods was questionable before the game because of a groin injury.