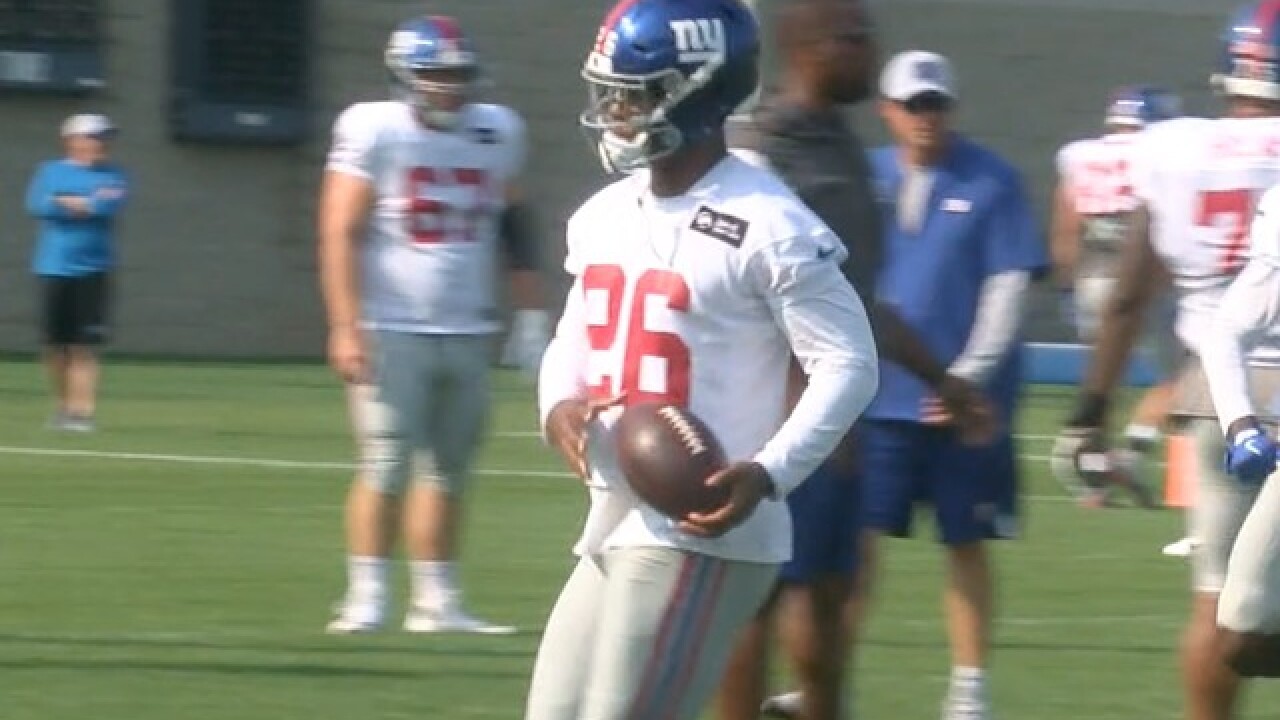 Copyright 2018 Scripps Media, Inc. All rights reserved. This material may not be published, broadcast, rewritten, or redistributed.
WXYZ-TV
<p>ALLEN PARK, MI -- AUGUST 14: New York Giants running back Saquon Barkley #26 goes through drills during a joint practice with the Detroit Lions on August 14, 2018 in Allen Park, Michigan. (Photo by WXYZ-TV)</p>

ALLEN PARK, Mich. (AP) -- Saquon Barkley stood and watched, for the most part, resting his strained left hamstring as the New York Giants practiced against the Detroit Lions on Tuesday.

Barkley, a rookie running back drafted No. 2 overall, went through some drills very slowly before going to the sideline to work on his strength and conditioning. The former Penn State star was in uniform, minus shoulder pads, with his healthy teammates in the first of three practices with the Lions.

On Monday, he caught a swing pass out of the backfield and was injured either stretching to make the catch or running down the sideline after the catch.

It's unclear if Barkley will play Friday night in a preseason game at Detroit.

"Player safety is right on the front burner for all of us all the time," Shurmur said. "If he's able to go, he'll play. If he's not, then he won't be out there."

Jonathan Stewart, who spent the first 10 years of his career with the Carolina Panthers, filled in for Barkley during at least some of the snaps with the Giants' first-string offense.

The Lions, meanwhile, had a key player walk off the field after being injured. Starting center Graham Glasgow appeared to hurt his left leg, leading him to leave practice.

Glasgow started all 16 games last year and played in 15 games, starting 11, the previous year as a rookie.

Detroit is counting on him to help improve its running game , which has ranked among the NFL's worst in recent years. The team's backup options at center include Wesley Johnson, who started 15 games for the New York Jets last season.

NOTES: Giants LB Connor Barwin, who has an undisclosed injury, did not practice and said the team is letting him rest. ... Lions president Rod Wood said the team is still looking into whether it is possible to put a retractable roof on Ford Field.