Kerryon Johnson's injury a concern for Lions after win over Panthers 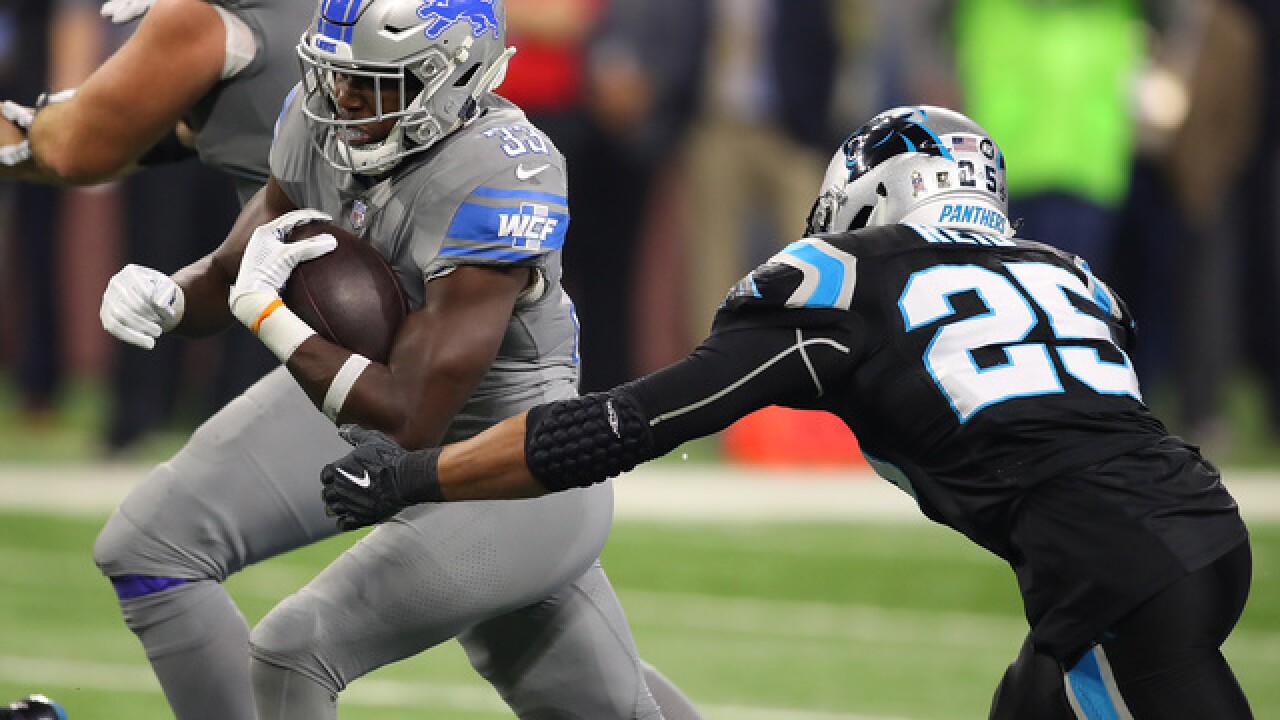 Copyright Getty Images
Gregory Shamus
<p>DETROIT, MI - NOVEMBER 18: Running back Kerryon Johnson #33 of the Detroit Lions runs for yardage against strong safety Eric Reid #25 of the Carolina Panthers during the first half at Ford Field on November 18, 2018 in Detroit, Michigan. (Photo by Gregory Shamus/Getty Images)</p>

ALLEN PARK, Mich. (AP) -- Kerryon Johnson has been a bright spot for Detroit in a season with plenty of struggles.

Now the Lions are finally coming off a win -- but Johnson exited that victory with a left knee injury.

Detroit's rookie running back went down in the second half of Sunday's win over the Carolina Panthers, and although the Lions had to be pleased to snap a three-game losing streak, they face a daunting task over the next couple of weeks.

Detroit has a short turnaround before its Thanksgiving game against Chicago -- not a great situation for a player recovering from an injury -- and then the Lions face the Los Angeles Rams.

Johnson has boosted Detroit's previously moribund running game. He has rushed for 641 yards on the season -- more than anyone on the Lions managed last season -- but it's not clear when he'll be able to play again.

"Not sure what his situation is, but we've dealt with it in other areas on our team before. Just next guy up, let's go," quarterback Matthew Stafford said.

"We have a bunch of guys in that room that are talented. If they need to play more, they'll play more. If they don't, then we'll roll with what we have."

Detroit was already without wide receiver Marvin Jones (knee) against Carolina. Then Johnson left the game, but the Lions were able to win anyway thanks to some big catches by receiver Kenny Golladay.

Detroit (4-6) still faces an uphill climb to make the playoffs. Its next two games are at home but against first-place teams. If Johnson isn't available, the path becomes even tougher.

"We'll take it day by day. We'll see how it goes," coach Matt Patricia said Monday. "We just have to stay even keel with all of it and make sure we prepare like we're just pushing forward."

Johnson leads the Lions with 118 carries. LeGarrette Blount has 78 and Stafford has 21. No other Detroit player has more than nine. Blount is averaging only 2.3 yards per attempt.

"Certainly, Kerryon has a skillset that's great, just like a lot of our other guys do," Patricia said. "I think we have good players, we have dynamic guys, guys that can make plays in different ways and it's not cookie-cutter. Football is not that way. When you have a different player that's in and in the same position, it doesn't mean that they can do the same thing. You have to be able to adjust."

The Lions could always bring in someone from outside the organization to help at running back, but there's not much time before the next game.

Running back Zach Zenner, who signed with the Lions earlier this month, could have a bigger role now. Zenner has played sporadically for Detroit since the 2015 season -- he had 88 carries in 2016.

"No matter what it means for me, it's always disappointing to see a teammate get injured," Zenner said. "Kerryon's a good teammate, good person, good friend. So it's certainly tough to see him have an injury. I don't know what the situation is. Hopefully he'll be back, ready to go, but if not, I'll be ready to do whatever I'm asked."