Lions back home but face tough matchup with Carolina 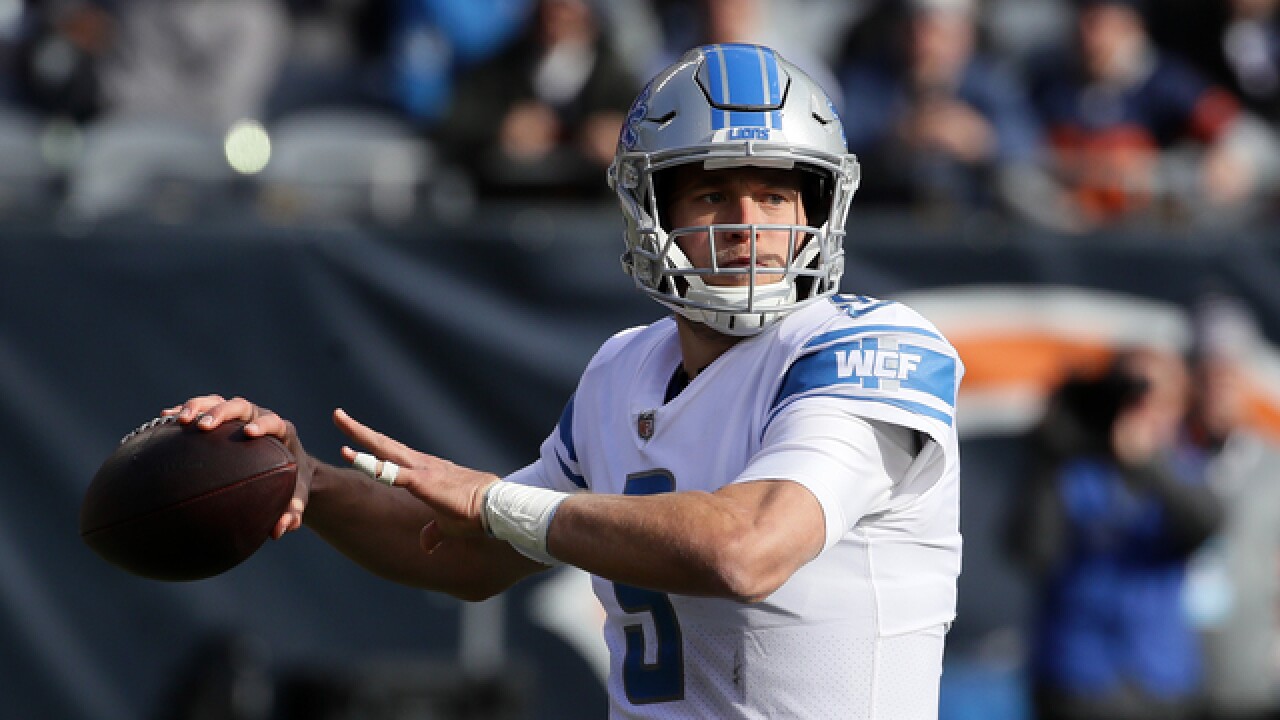 DETROIT (AP) -- Matthew Stafford and the Detroit Lions have three straight home games coming up -- probably their last chance to turn their season around and make a run at a playoff spot.

The opposition is formidable, though.

After three consecutive losses, the Lions host Carolina on Sunday. That game is followed by a Thanksgiving matchup with Chicago and another home test against the NFC West-leading Rams. There's time for Detroit to rally, but the path forward looks difficult.

"I think everybody's doing everything they can to try and get us going," said Stafford, whose team has scored only 20 first-half points over the past three games. "I think it's a total team effort. Everybody's trying to play better at all positions."

The Lions (3-6) will face a Carolina team that's in a much better spot, although the Panthers (6-3) are trying to rebound as well from their most recent outing, a 52-21 loss to the Steelers on Nov. 8. The 52 points allowed tied the most in franchise history. Pittsburgh scored on seven of its first eight possessions.

"I don't think that is indicative of who we are as a football team," Panthers coach Ron Rivera said. "One game is not going to define who we are going forward. It is an example of what happens if we don't play to our abilities and stick to our fundamentals, don't play the defense, offense or special teams play the way that it is called."

The Lions and Panthers are in different divisions, but they did meet last season, when Carolina won 27-24 in Detroit. Cam Newton threw for three touchdowns in that game, and Stafford threw for two.

A few more things to watch when the Lions host the Panthers:

MISMATCH?
The Lions are 28th in the NFL against the run, and now they'll have to face Carolina's versatile running back Christian McCaffrey, who has seven touchdowns in the past three weeks. McCaffrey has run 45 times for 201 yards and caught 14 passes for 150 yards during that span.
McCaffrey has been on the field for 96 percent of his team's offensive snaps, more than any running back in the NFL.

ROLLING
Newton has thrown for at least two touchdowns in eight consecutive games, a franchise record.
"Obviously one of the most dangerous quarterbacks in the NFL and someone that can really change the outcome of the game all by himself," Lions coach Matt Patricia said. "Still has obviously all the athletic ability, the arm strength now just kind of combined with the experience and his knowledge of the game. And he's just really been able to take it to the next level and carry those guys around him."

SPEED ON TURF
The Panthers will get to see how their much-improved team speed does in their first game this season on artificial turf.
Carolina added D.J. Moore from Maryland in the first round of the NFL draft, while fellow wide receiver Curtis Samuel back after an injury-plagued rookie season.
"It's going to be fun to see," Rivera said. "We've got some quick guys who will be even quicker on turf."

PROTECTION
Detroit has allowed 16 sacks in the past two games, and the Lions put guard T.J. Lang on injured reserve this week. The Lions still have a couple of recent first-round draft picks on their offensive line in Taylor Decker and Frank Ragnow, but pass protection will be an area to watch this week.
Detroit's running game has improved a bit, but it wasn't of much use last week after the Lions fell behind 26-0 in the second quarter of a loss at Chicago.

MEETING AGAIN
DE Julius Peppers of the Panthers is still a factor at age 38. He had a sack in the game against Pittsburgh.
Back in 2010, Peppers sacked Stafford, injuring his right shoulder. Peppers played for Chicago then, and he's also spent time with Green Bay, so the Lions have seen plenty of him.
"He's 6-6, 295 pounds, whatever he is. Extremely athletic, very smart player," Stafford said. "He's seen a lot of football, he's a smart rusher. We've seen him do just some things late in the pass rush, getting sacks, that's pretty special."