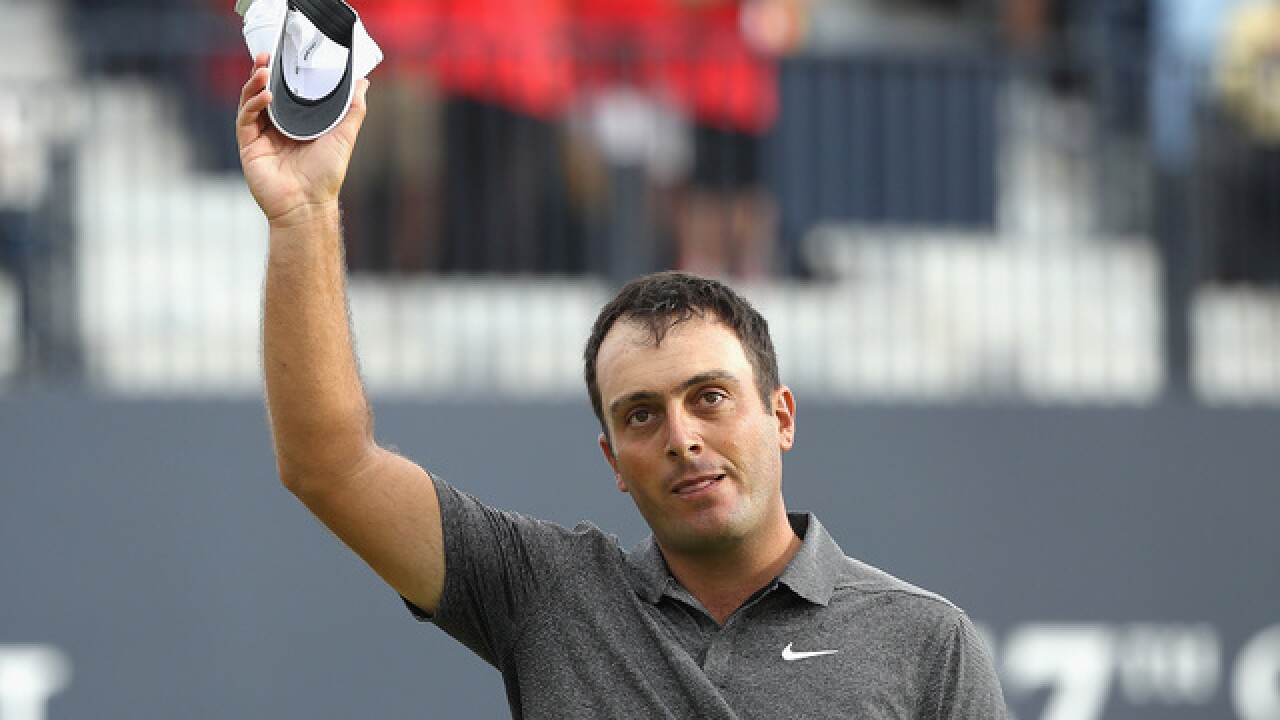 Copyright Getty Images
Francois Nel
<p>CARNOUSTIE, SCOTLAND - JULY 22: Francesco Molinari of Italy acknowledges the crowd after a birdie on the 18th hole during the final round of the 147th Open Championship at Carnoustie Golf Club on July 22, 2018 in Carnoustie, Scotland. (Photo by Francois Nel/Getty Images)</p>

Tiger Woods took the lead on Sunday at a major for the first time in nine years and lost it with one bad swing. Jordan Spieth cost himself another chance in a major by failing to make a single birdie.

Seven players had a share of the lead at some point. Six were still tied on the back nine.

Through all that suspense, Molinari never flinched.

He closed with a 2-under 69, playing the final 37 holes on the toughest links in golf without a bogey. The clincher was a bold drive on the 18th hole that flirted with edge of a pot bunker, a wedge to 5 feet and a birdie putt that made him a major champion.

Molinari, who finished at 8-under 276, raised his fist and shook it lightly before slamming it for emphasis.

The first to congratulate him was Woods. They were together three weeks ago when Molinari closed with a 62 to win the Quicken Loans National, with Woods presenting him the trophy.

The 35-year-old then had to wait to see if anyone could catch him.

Xander Schauffele, the last one to keep alive the American streak of five straight majors, was one shot behind until he sent a long iron well to the right of the 17th hole and failed to convert a 15-foot par putt to fall two shots behind.

Schauffele had to hole out a wedge on the final hole and checked up well short of the hole.

"It's been a tough fight," Molinari said modestly in congratulating the four guys who finished second. "But there can only be one winner. This time, it's me."

Schauffele had to settle for second place with Rory McIlroy, Justin Rose and Kevin Kisner, all of whom had plenty of reason to hope on a warm, windy afternoon that put plenty of bite back into Carnoustie.

All of them made mistakes, big and small.

The biggest blunder belonged to Woods, his red shirt blazing against the yellow grass of dry Scottish summer. The roars for his two birdies could be heard from all corners of Carnoustie. He looked like the Woods of old, and it felt like old times when everyone he was chasing began to collapse.

Woods was at 7 under, in control of his game and hitting shots that only he can. From a pot bunker on No. 10, he took a bold and vicious swing to get it over the lip, over the burn and to the front edge of the green.

And then it all went wrong. He pulled his shot from the rough on No. 11 into the gallery, fluffed a wedge short of the green, ran it by 8 feet and missed the putt for double bogey. Another poor swing followed and led to another bogey, and just like that, Woods was two shots behind and reeling.

"A little ticked off at myself, for sure," Woods said. "I had a chance starting that back nine to do something, and I didn't do it."

Molinari twice saved par with 8-foot putts on the 12th and 13th, and he took the lead for the first time with a short birdie on the par-5 14th. With another tough save from off the green at the 16th, he didn't miss a shot the rest of the way.

It capped off the best stretch of golf in his career. Over the last two months, Molinari has won three times and runner-up twice, and his first major moves him to a career-best No. 6 in the world.